Again I go back to artwork done for Saturday role-playing games, a thing which I started doing in 1981. It filled my life for a time. And it also taught me to be a teacher. After all, the DM (Dungeon Master, or Game Master) has to be a story-teller and a master explainer… just like a school teacher.

Here I am back to doing D&D and Traveller on Saturdays. All of the art in this post was once used in conjunction with RPGs played with former students, and my own kids. I was always the game master in the past, and I used drawings and illustrations to help the imaginary adventures come to life.

Harun the Charmer was only ever used as a player-character once. The boy whose character it was provided the face I modeled it after. He was an absolutely arresting boy that had such a winning personality that people fell in love with him almost instantly.

He spent way more time helping another teacher grade papers than he did playing Talislanta games with goofy old Mr. B.

And I promise, only one of the facts presented here about Harun is a lie, in attempt to protect this young gentleman’s identity. We unfortunately lost him back in the 1990’s.

I did it again. What did I do, you may ask? I executed a plan and finished a project that I have been working on for some time.

Princess Persimmons’s Castle is the remains of a plastic children’s play-set, the brand and name of which I do not know. It was purchased for a quarter at a Goodwill store. I repainted the purple, pink, and blue plastic castle, and added snow.

The Princess herself is an unpainted D&D figure purchased in a game store at the Music City Mall in Lewisville while waiting for the start of a movie, Black Panther, I think. I painted her with enamel.

The three minstrels below are bard figures for D&D, purchased from the same place on two different occasions. They are painted with the same paints.

The background is an old Christmas card, altered with my computer’s paint program to fit the picture-project I had in mind.

And I will be able to place the castle and all the figures in other pictures in the future, as well as use them all for future games of D&D.

There is something very satisfying about completing a project. The picture you had in your head when you started all comes together. And it doesn’t match the original idea. But, still, you have accomplished an act of making art. Of course, when I say, “You”, I really mean, “Me”. But, I’m betting you probably know exactly what I am talking about

In honor of all the years I spent playing dungeon master on Saturday afternoons, I am posting pictures to keep the posting of D&D stuff on Saturdays as a tradition.  I really am a bit too achy and ill to post any old orc and ogre stories today. 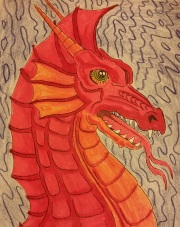 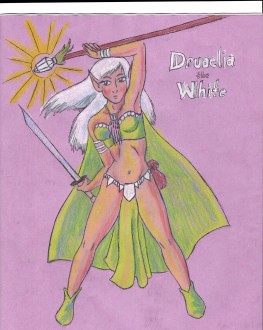 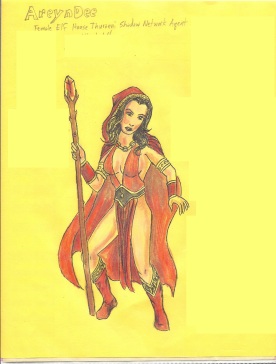 Tagged as Dungeons and Dragons

Back in the early 1990’s my little group of game players turned the full power of nerd obsession on the fantasy role-playing game Call of Cthulhu.  It is a totally weird little game based on the novels and short stories of H. P. Lovecraft.   It is a game about solving mysteries that, if successfully solved, will lead you to confrontations with all-powerful ancient evils that you cannot win against.  And you keep playing until your character absorbs so many insanity points that they go completely insane.  Your character then becomes a minion of demonic and irresistible evil that the next player character you roll up will have to hunt and defeat.  It is not a game you ever win.  You merely have to learn to survive and stay sane, things at which the game is set up to make you fail.

In 1991 the television gods took an old vampire soap opera that I had loved in the 60’s and remade it.  Dark Shadows came back to life starring Ben Cross as Barnabas Collins (the Chariots of Fire guy playing the vampire role that would later have a part in the downfall of Johnny Depp.)  The lead player in our group, a kid who was such a nerd that he would go one to be in the intelligence division of the Marine Corps, decided his character would have to be the vampire Barnabas Collins.  He reasoned that the only way to fight big evils was to fight back with evil that had been converted back to goodness.

And his instincts were good.  Barnabas and his lady love, Victoria Winters, were the only player characters not eaten by the minions of Nyarlathotep in the first adventure.  And Victoria had to be raised from the dead by having Barnabas turn her into a Vampire.

Of course, the very next challenge would be from a white witch voodoo priestess from New Orleans, the Vampire hunter Sofia Jefferson.  (She was an NPC, not Sofie’s player character).  And she had a special potion that, given to a vampire, would restore it to normal human life.

This was a problem for Barnabas, because he really depended on his powers as a vampire and was not willing to go on without those powers.  So the vampire hunter had to be avoided without killing her and putting an end to her good work fighting evil.  If you can’t tell from the picture, Sofia was blind, yet could see with uncanny vision through sightless eyes.

The next player character added to survive more than one adventure borrowed Luis’s vampire idea by making his character from the movie Darkman, a Liam Neeson movie about a doctor who had burned his face off, but could become other people by wearing their cloned skin.  He was the lead investigator to help solve the werewolf problem in the bayou , and took on the dark circus adventure where the foolish sideshow people were trying to make money exhibiting the captured Headless Horseman of Sleepy Hollow.

There was a lot of death and horrible murders in those game sessions, but not committed by the player characters.  They had to keep good notes and draw conclusions and manage their characters’ powers and assets.  Notes like these; 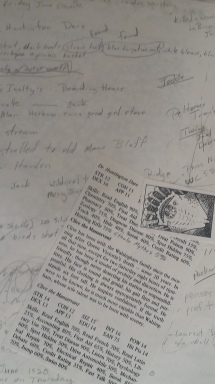 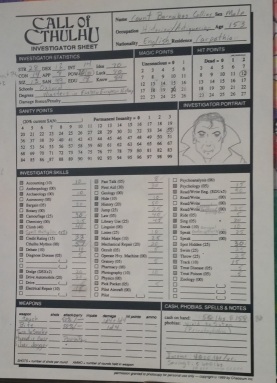 And so, while the game never ended to my satisfaction, the players did get the feel of acting in a horror movie and fighting on the side of goodness against evil.  It was weird, but definitely worth doing. 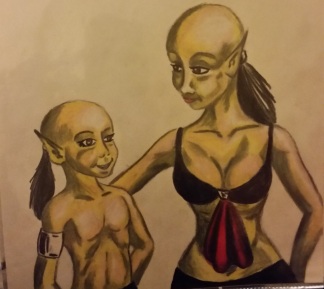 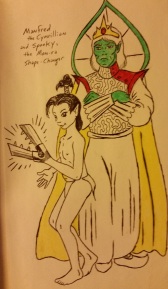 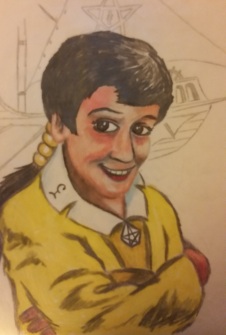 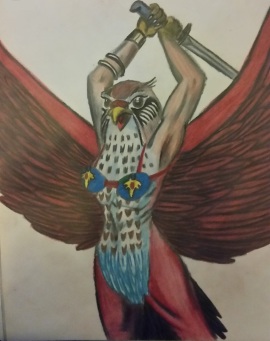 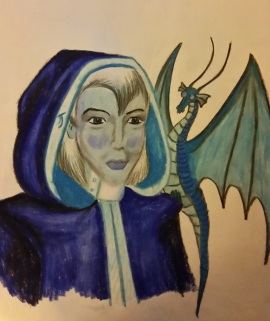 These images were made in the early 90’s as I played an RPG game called Talislanta.  It was a sword and sorcery D&D-like game with no elves, dwarves, or other ordinary D&D creatures.  The blue guys are a race called Mirin who live in the coldest places.  The green guys are Cymrillians and Tanasians, a magic-using race.  There really weren’t even humans among the many weird races of Talislanta.  And drawing these things was gloriously liberating in a fantasy-art sort of way.

A tattooed Thrall warrior from the Seven Kingdoms. 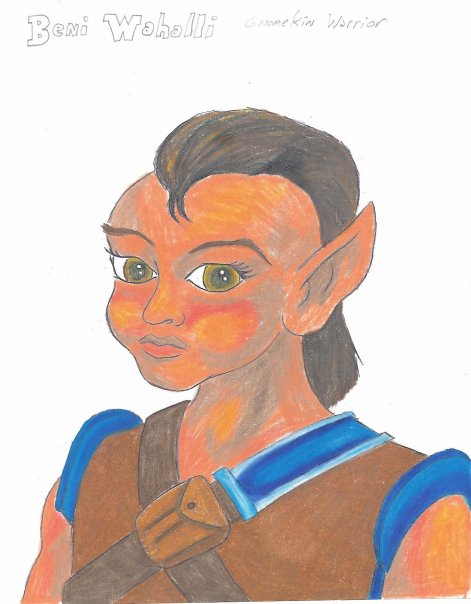 A Gnomekin from the Seven Kingdoms. 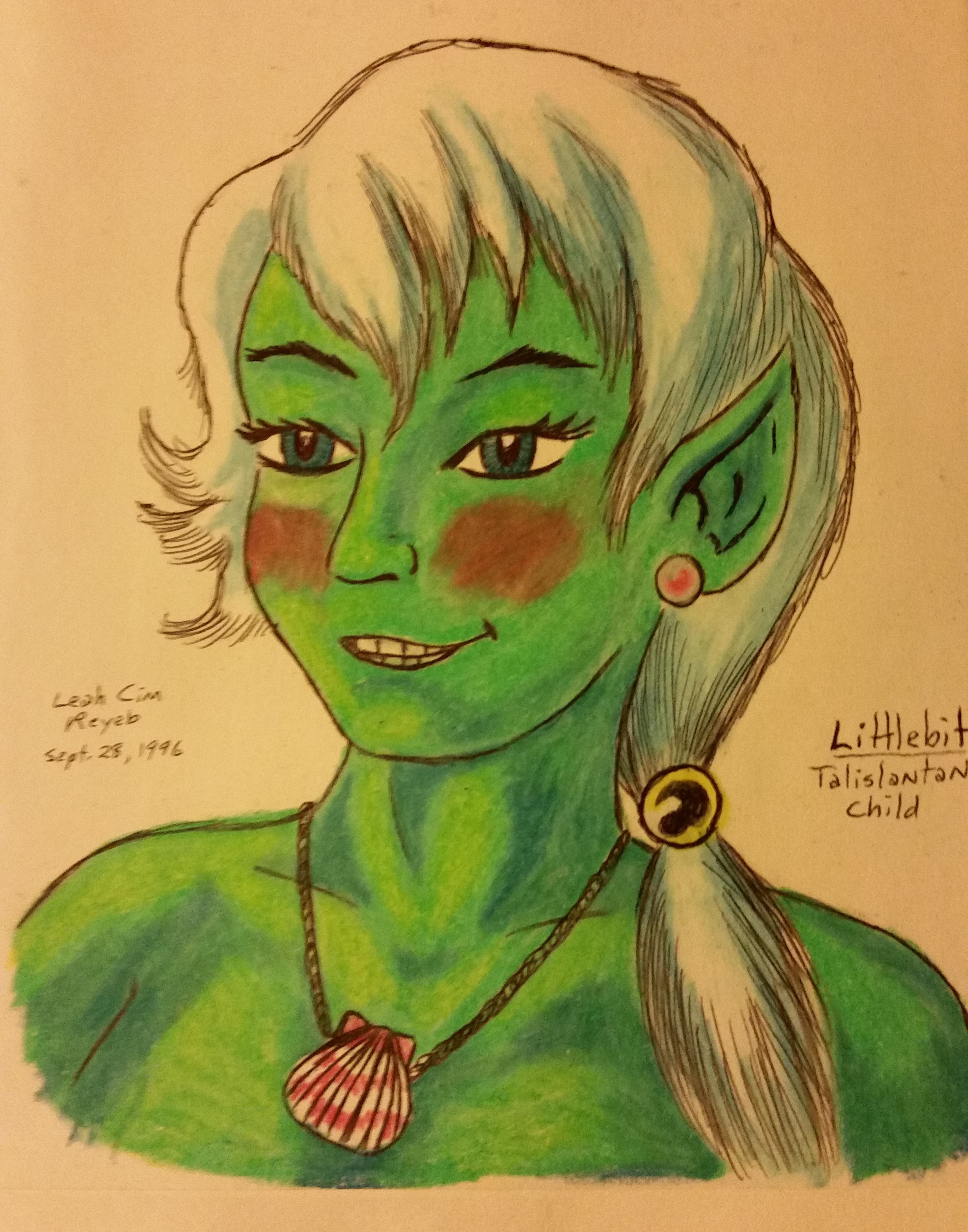 An Oceanian ship’s boy from the pirate crew of the Skull-Bearer, a three-masted schooner with lateen sails. 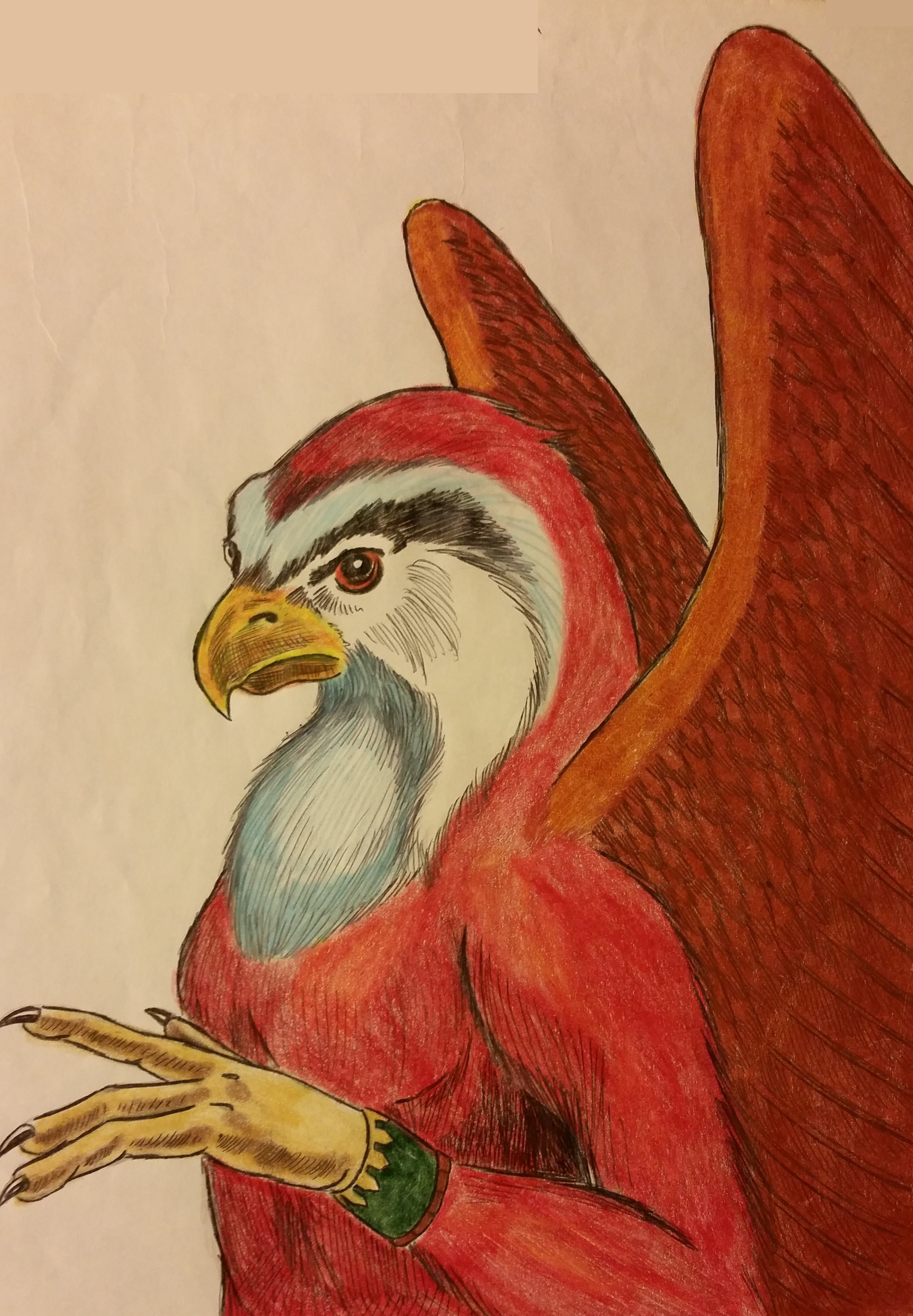 A Gryph scout from the Seven Kingdoms.

Filed under Dungeons and Dragons

An author can’t resist portraying himself somewhere in his fiction. Even though the entire work of fiction is actually a map of the inside of the author’s self, there will be a character who is the self-portrait of the author buried somewhere within.  It may be the first person narrator of the story.  Or it may be a background character lurking at the periphery of the plot.

In the ongoing work of fiction that is my family D&D game, that me-character is the wizard in red, Eli Tragedy.  Yes, bumbling, doddering, and constantly babbling Eli Tragedy, aged half-elf with a little more than half a wit, is basically me.  His two apprentices, Bob and Mickey the Were-rat, are constantly at his side to open doors for him, set off booby traps stupidly before he gets there, and generally demonstrate the level of his teaching ability by their lazy incompetence and general inability to learn anything.

Now, lest you think I might really be exactly like this exaggeratedly foolish fool of a character armed with way too much magical ability and arcane knowledge to be safe wandering around freely in public, let me assure you, we are very different, Eli and I.  He’s at least a centimeter taller than I am when he stands up straight.  I have, however, aimed more than a few metaphorical fireballs at my own image in the hallway mirror.  And I may have burned my own eyebrows off more than once.  But Eli’s real purpose is mainly to poke fun at myself and create a few laughs, along with a few D&D style world-ending crisis-es, as when Mickey the Were-rat stole and misused Eli’s magic hat.  Dang, those toe-dancing pink rhinoceroses with the nitroglycerin in their over-sized backpacks were heck to herd back into the King’s Royal Zoo!

But now, I am finally ready to admit it.  Eli Tragedy is my alter ego.  I like the color red.  I am fond of random explosions and acts of inexplicable transformation.  Eli Tragedy is me.  And I promise, I won’t really blow the world up.  It is only a role-playing game after all.

Tagged as Dungeons and Dragons

I feel the need to take up the subject of a role playing game that I planned for and played to a limited degree, but explored to the point of insanity.

But I am recovering now from the double-danged downers of taking care of my bankruptcy case and paying off a surprise new tax penalty that nearly sank my little boat. Therefore, I can’t go into this in depth until my mind is more fortified against the depredations of Yog Sothoth. 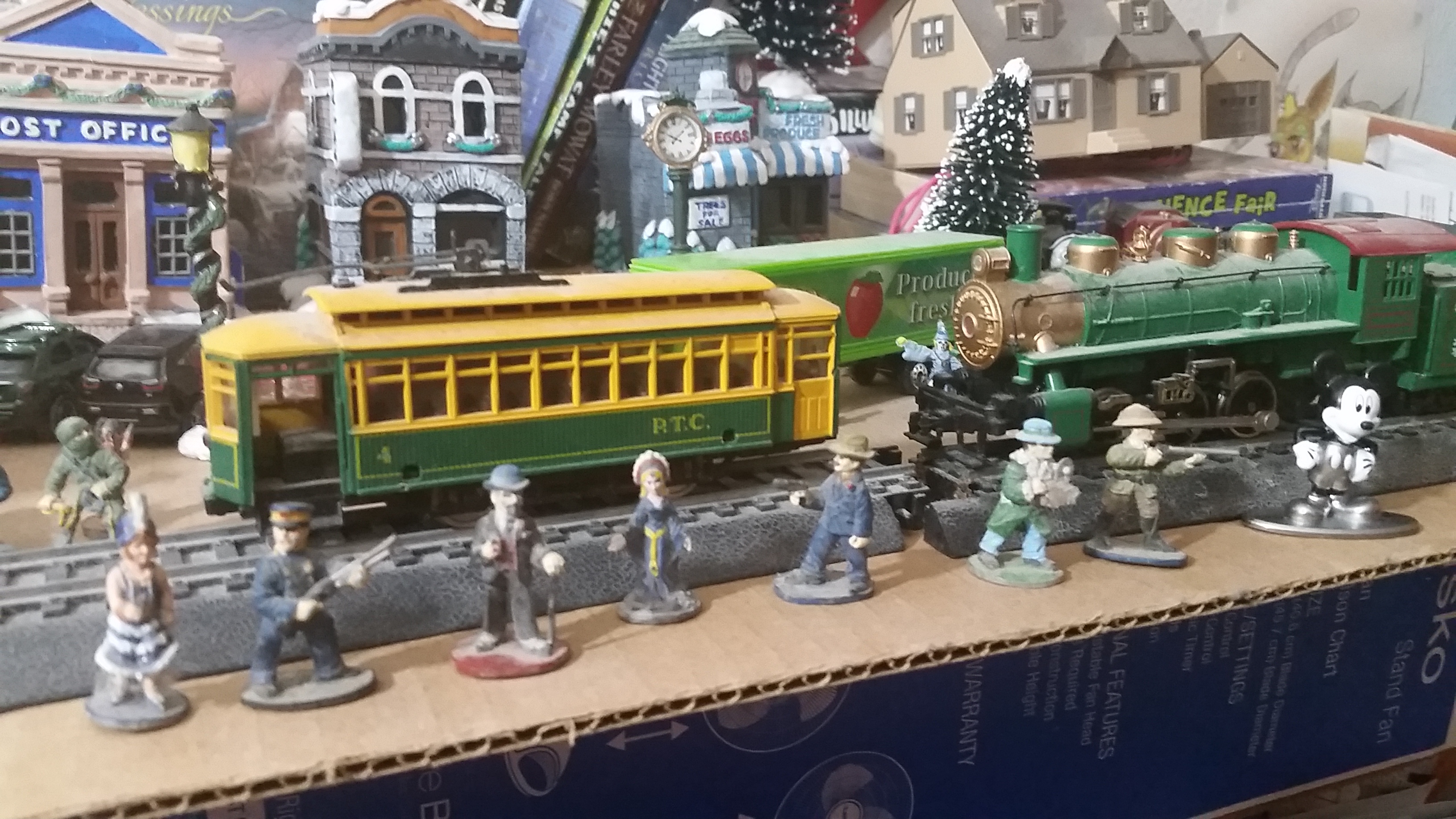 So, next week I will begin talking endlessly and listlessly about the infinite insanity of Call of Cthulhu, the role-playing game. In a gibbering, half-insane manner, I will describe the playing of a game where you confront the depths of human darkness in an indifferent and terrifying world. And I will attempt to explain why a school teacher in his right mind (as much as a middle school teacher can be in his right mind) would ever take up such a game. So, stay tuned to Mickey the Dungeon Master’s silly little Saturday D&D blog.

I joined an art challenge Facebook group that regularly pits doodlers against each other with four minutes to doodle in and a place to post the results. And we do it for absolutely no prizes or titles or even ranking, just for the love of doodling. So here is a recent 4-minute doodle by Mickey posted on that selfsame super-silly group;

If you are having trouble believing that I dragon-doodled this in only 4 minutes, please notice that that the left side of the dragon’s face is clearly the area I was rushing to complete as the time was running out. I doodled this in black ink with a ballpoint pen. I timed it. And I have drawn numerous dragons before. So you could rationalize that I really worked for hours upon hours to be able to do this four minute doodle.