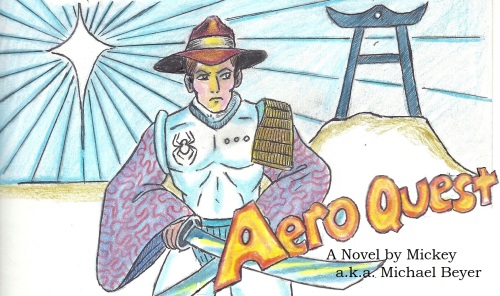 I have to tell you, brilliant as I am, I will probably never figure out the reasons for the existence of things like the Bedrock Culture of the planet, Don’t Go Here.  I do know that the first colony that archeologists uncovered from there was a back-to-nature group that had a weird religion that insisted they reject all modern technology.  After a number of years, their culture began to be inundated with marooned starship passengers by the Stardog Corsairs.  It was claimed that the only entertainment that had been left to them were a handful of cartoon holovids and one holovid player.  The Flintstones took on a kind of religious significance among the growing population of the planet.

Evidence clearly indicates that the first colonists were Galtorrian refugees from the planet Dionysus.  They were a group of Galtorr/Human Fusions, Earthers, and a group of humanoid saurians known as Dions on Dionysus.  You know what that mix looks like, right?  Lizard men and half-lizard-men with humans mixed in.  They brought with them saurian pets and work animals of the kind usually referred to in Galactic English as the dinosaurs.  They also brought numerous Dionysian plants.

Now, Dions are not accustomed to wearing clothing anywhere but in space.  They have natural scale armor and even their private parts and prehensile tails are covered by living leather and scales.  That’s a fashion choice that makes me cringe a little.  The humans who came with them were dedicated to the idea that it was only right to wear as little clothing as they could get away with in honor of their Dion friends.  Even the primitive monkey people who were brought along as slaves, those peculiar furry pygmies known as Lemurians, were taught to wear nothing beyond the occasional synthetic fur.

I guess it only made sense when this back-to-nature group with their cartoonish ways and chosen primitive lifestyle were mixed with castaways from all over, and marooned spacers stripped of all tech gear, they were bound to mutate into a blended culture unlike any that had grown up anywhere else. 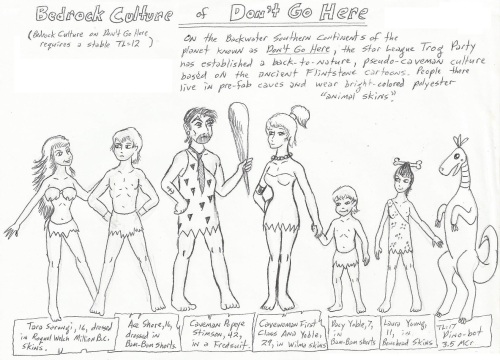 For clothing, a few electrical material synthesizers were created from scrounged parts of the scuttled colonial ships.  Thus, synthetic furs could be manufactured for clothing, since organic material was plentiful, but furred animals didn’t exist on the planet.  Synthesized stone-foam wads could be easily hollowed out to make stone homes that looked almost exactly like the homes in the Flintstones holovids.

The fake orange furs with black triangles on them came to be known as Fredsuits.  White fur dresses became known as Wilma Skins.  Blue fur went into Bettypelts, and Brown was for Barneysuits.  Bam-Bam Shorts and Pebblespelts, also known as Bonehead Skins, rounded out the major styles.  Fred, Wilma, Barney, Betty, Pebbles and Bam-Bam became the most common names chosen by colonists and castaways alike.  They began to distinguish themselves from one another by adding numbers to their names.  Most ridiculous of all, the most common vehicle developed by the highly imitative culture was the foot-powered car.  They gave up all practical value in order to imitate the cartoon show.

By the time the Aero Brothers arrived, the culture of the planet Don’t Go Here had degenerated into something unparalleled in history and monumentally silly.

Even though I am sixty-plus-years-old, I am stressed enough by everyday life that I need to take some time to get the toys out of the toy box and play with them, making up fantastical stories in my head and pretending the world is the way I want it to be. 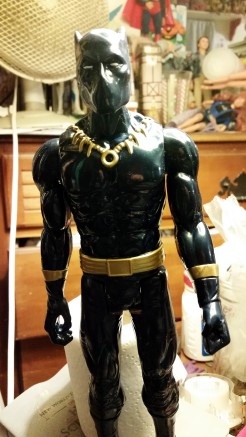 I mean, why can’t fire-fighter Barbie fall in love with the Black Panther?

The two of them are so very different.  One is a vivacious young working girl ready to put out fires, while the other is a dark and moody superhero dead set on bringing justice to villains, no matter how powerful they might seem.  Shouldn’t they be able to find happiness together despite what the drummer bear may think about the appropriateness of two such different plastic people being in love?

And money woes, deteriorating health, recent car accidents and ratcheted-up premiums on car insurance melt into the background.  Especially if you hum to yourself as you pretend to make them kiss.  “Love is a Many Splendored Thing…”.

Not all the toys are new.  In fact, only the double-headed dragon is actually new to the over-all collection.

It’s good that the dragon can so easily make itself at home in the cardboard castle. 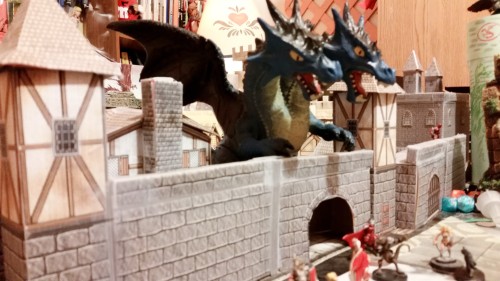 It would be good if it didn’t decide to eat the cardboard castle.

Wonder woman, sitting on my underwear drawer is also new.  Maybe I am buying too many toys.  But in my defense, I am in my second childhood, and sometimes I just need to play with toys.  It solves a lot of problems that I am too old and tired to make go away otherwise.  And it also makes a good short post when the idea bag is short on short topics and the time for writing is limited. 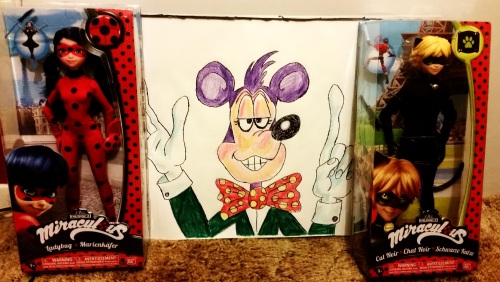 Yes, Mickey couldn’t help it.  The toys hit the shelves in Walmart.  He discovered the silly superhero junior highschool romance thing first on Pinterest, then on YouTube.  Miraculous, the Adventures of Ladybug and Cat Noir.   The silly thing is on Netflix now too.

So, why would a goofy old man like me be interested in a thing like this… a thing aimed at an audience of pre-teen girls?  That’s disturbingly creepy, isn’t it?

Well, I never claimed to be cool.  I was an English teacher for 31 years.  Cool was never an option.

And I collect dolls… erm… action figures… uh… well, I might as well be honest.  I have more Barbies than G.I. Joes.  I have a hoarding disorder fixated on 12-inch dolls.  And when I saw this doll for less than 15 dollars at Walmart, I had to buy it.  And it has the other super hero, Cat Noir right beside it.  Both under 20 dollars so they fit under the 20 dollar limit.  And both together only cost 30 dollars, so it fits under the 50 dollar per month limit as well.  Those collecting rules are important in saving me from my own juvenile regressive self and helps me have enough money to buy food all month long.

The people in the store don’t look at me funny.  I am not the only old man buying toys and dolls in Walmart.  I am just the only old man there not buying for his grandkids.  I don’t have any grandkids yet, and my own kids are definitely older than the toy-wanting stage.  The people would be far more disturbed if they knew I was now struggling with the question, “Do I preserve these dolls mint-in-box?  Or do I take them out and play with them?”  And if you have read any of my lunatic “he-plays-with-dolls” posts, you probably already know how that one will turn out.

People might also be deeply disturbed to know that I have already watched two episodes of Miraculous, and (shudder) liked them in spite of the moronic romance and love-triangle bull poop.  I can’t promise that I will not watch more and turn away from this new filthy habit.  The stories are stupid villain-of-the-week stuff.  But the CGI animation is brightly colored, smooth, and highly interesting… to the point that I and any available chimpanzees or monkeys will be enthralled with it.  Oh, and pre-teen girls too.  I won’t go into the connections between those things. 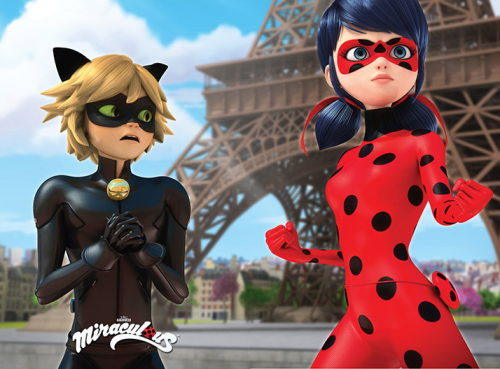 I could probably spend a lot of words telling you more about how this cartoon is set in Paris, France, and how Marinette and Adrien, the secret identities of the two superheroes above, are both in love with each other, but don’t realize it because neither one knows the secret identity of the other.  But I won’t.  This post is not a review of the cartoon show.  This post is a goofy commentary celebrating the fact that I bought myself two more dolls, and now must somehow rationalize that weird, compulsive act.

I am sorry, but today’s post will probably bore you unless you are a doll-collecting, obsessive-compulsive bag of mixed nuts like I am.  These are the kinds of details that only interest the true collect-a-holic.  You see in the picture my mint in-the-box Star Trek Barbie and Ken, 1996 30th Anniversary Edition.  It was a difficult track-down.  Now, you Google it and you can get one for 25 dollars on e-Bay without breaking a sweat.  When I got hold of this in 1998, however, it was a bit tougher to find.  It started with a trip to Goodwill.  My wife loves the bargain clothing and especially the shoes.  (She’s from the Philippines and has a touch of Imelda Marcos Footwear Disease.)  While there, with my young son in tow, in the toy section… I discovered two loose Barbie and Ken dolls that actually weren’t naked.  Barbie’s head was severely damaged, and she had lost a leg.  Ken was in practically un-loved, un-played-with condition.  Both had uniforms.  The Star Trek uniforms you see here on the two figures in front.  (Ken was missing the shoes, phaser, and communicator, but the original accessories were pretty small and pitiful anyway.  Barbie had no fishnet stockings and no shoes, along with no working head.)  Of course I had to buy these wonderful items.  They cost me 25 cents apiece.  Gonga!  I hadn’t known that such a 12″ action figure existed!  (Okay, really a doll, but, you know…)  I immediately began a search of toy stores and junk shops in South Texas.  At the time we had relatives in Dallas.  So I went prowling there too.  You wouldn’t believe the looks I used to get from parents wondering what a forty-something old man by himself wanted in the Barbie section of KayBee Toys.  Now they see my gray hair and figure, ah yes, shopping for his granddaughter (of which I have none, but I digress.)  Finally I found the rare item in a San Antonio flea market stall.  And it only set me back fifteen dollars.  Wotta find!  It made my goofy old collector’s heart glad for a couple of months afterwards… heck, that’s not true either!  Sixteen years later it still makes me giddy.

Tagged as Barbie and Ken, collecting, happiness is a collectible doll at an affordable price, humor, photo, photo Paffooney