I am now actually pursuing a return to the classroom. Even worse news… I am seriously looking at returning to the campuses where they pursue calming of the hormones in the monkey years, grades 6 through 8.

Yes, I have foolishly applied to become a substitute teacher for Carrollton-Farmers Branch School District. So, in this essay, I intend to successfully talk myself into a final adventure in bunny wrangling.

It is fairly obvious, if you look at today’s Paffooney, that Reluctant Rabbit is me. I am the wackadoo with the big pencil, whether I am in full carrot-eating mode or not. Absolutely necessary now is earning extra money, since life is only going to get more expensive now that I am permanently on a fixed income. And Uber driving is only going to get me killed now that the fees have gone down and the expenses have gone up. Too much driving in heat and Dallas traffic is wearing away my limited health points indicated by the red bar that floats above my head. And yes, I know that only happens in video games, but driving is like a video game, except you only have one life to lose in collisions.

And teaching is what I know best. I know I do not get the chance to get to know the kids like I did as a regular classroom bunny wrangler. But I still get to work with kids. And I don’t have to do lesson plans or grade papers. I do not have to work on days when I am too ill to cope. And I can make better pocket change each month than I can driving for less than slave wages.

So, I found the one person from the Garland district that knew me as a teacher and is still not dead, fired, or retired to give me a letter of reference, the one required to be a sub. The application is in. And there is a way-better-than-even chance that they will hire me. I have a lifetime teaching certificate. And schools around here are so desperate for subs that they kidnap drunks in back alleys to have enough of them to cover all the classes.

Now I must prepare myself for spitball and booger flinging, bizarre insults about my supposed rabbit ancestry, and ugly-face standoffs between hate-filled little bunnies. The monkey years. And Reluctant Rabbit has been away from them for too long.

Part of being a dungeon master is the responsibility for creating the dungeon.  Now I do intend to fully explain the events of the siege of Castle Evernight in a future Saturday D&D post, but today I want to show you my dungeon setting, the Keep of the Duke of Passage, Dane Evernight.  This is me thinking like an insane architect to build a tall, spindly castle that no real-life king or duke would ever try to live in.  But insane as it was, it had to be drawn to scale and the inner workings had to be mapped out on grid paper where every little square represented a space of 5 feet by 5 feet. 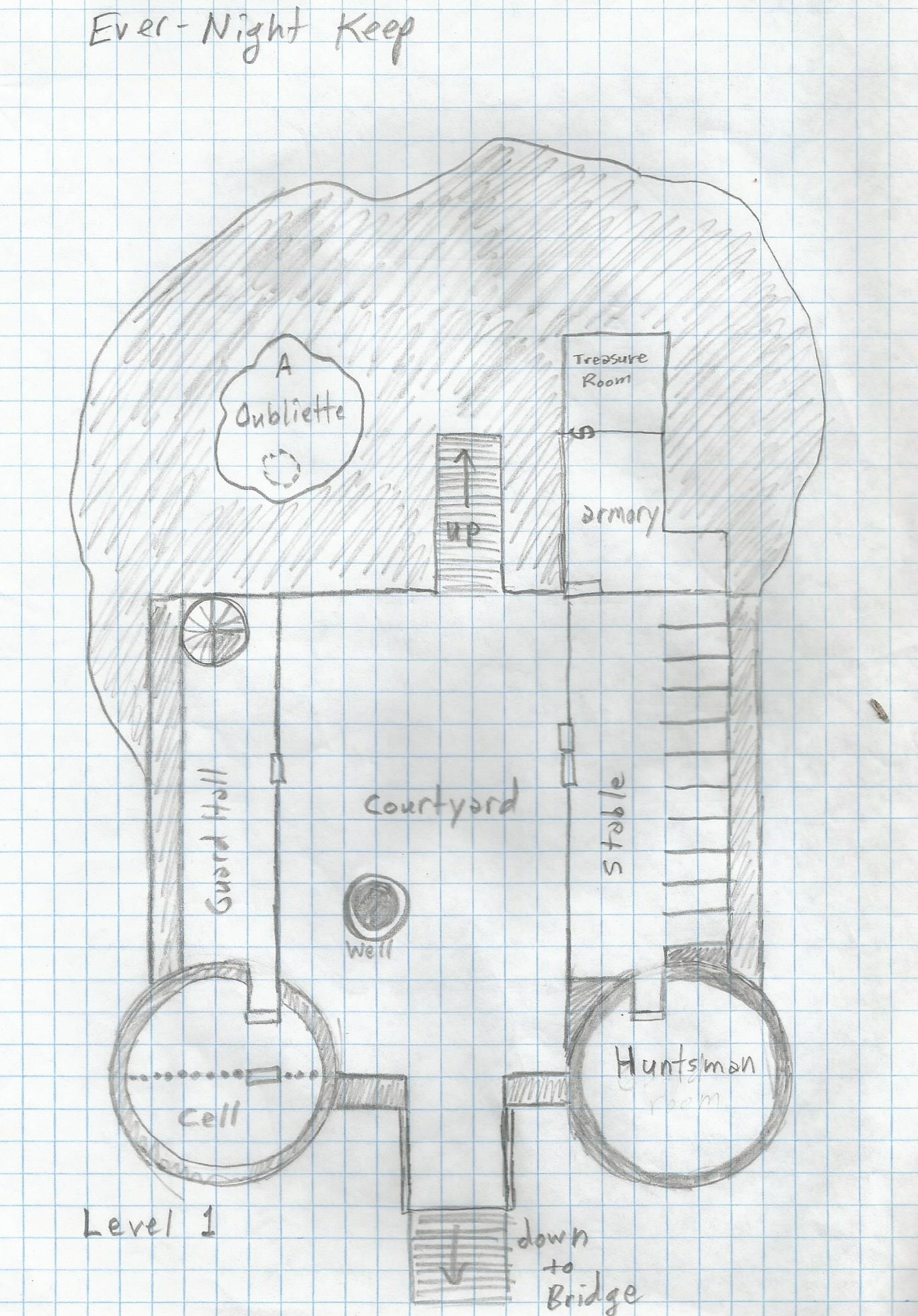 Level one shows the areas you would enter coming in through the front gate.  Colored-in areas represent the solid stone from which this castle is built as well as the rock spire it was precariously perched upon.   The usual dungeon-master map symbols apply.  The little empty rectangle thingy blocking passageways and interrupting walls is to be interpreted as a door.  You can also see that to visit on horseback requires your trusty steed to be able to climb stairs.  So, unless you have a verily dexterous and unusual horse, you should probably ride in griffin-back or dragon-back.

Moving to Level 2 brings you to where the Duke’s Great Hall would receive you as a visitor.  There are also places you would like to get to, especially if you are a teenage boy, like the harem and the bathing pool attached to the harem, and maybe the Magic Lab, but you will most likely not be allowed into those places.  But you see the dark spots in the walls?  Those are the garderobes.  You probably will be allowed access there, because, when you gotta go, you gotta go, and that is the proper place to go.  Medieval castles have primitive plumbing.

Level 3 is the level I would most want to see if I were touring this place myself.  Not only is it the place that has the library in it, but it houses the limner’s studio, and the limner is the resident painter, picture-maker, and white-washer of fences and garderobes. 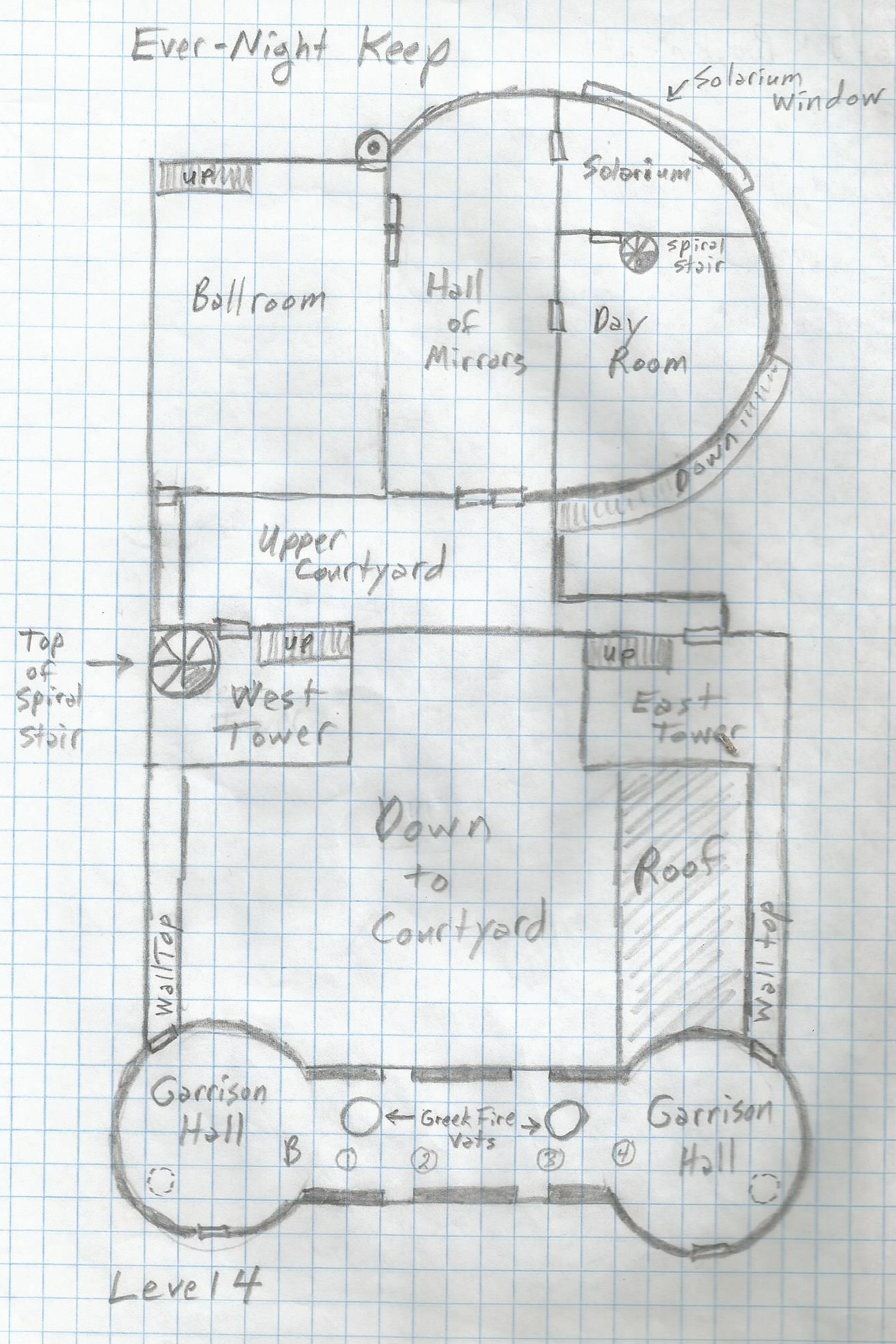 Level 4 contains the “Party Central” places that every highly social and only mildly psychotic nobleman seeks to spend his schmooze time.  There’s a ballroom for dancing, a solarium for getting sunburn when you drink too much wizard’s ale and dance naked in the sunshine for too long, and a hall of mirrors for admiring the way the sunburn makes your behind glow bright red.

Level 5 is getting up to the top of the towers.  In a vertical dungeon like this one, this should be nearing the adventure climax.  That was not how it happened, however.  I will tell you more about that in another post.  This is where the belfry bats and the Duke’s treasures are stored.

By the time you reach the Summit of the Keep, you are beginning to think that something is seriously and morbidly wrong with this Castle.  This is where you will find the Evil Doctor Zorgo and the animated remains of Duke Dane Evernight.   And golem labs next to sarcophagus rooms?  Something has gone terribly wrong here.   But don’t have nightmares about it, or anything.  Rest assured that Gandy Rumspot and Mira the Kalashtar have already solved this problem or I wouldn’t be telling you about it.  Dungeon masters, at least the good ones, never reveal a secret before the dice are rolled.

Mickey Gets Older… and Older… and, well, you know… 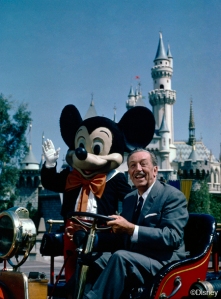 Mickey Mouse was born on November 18, 1928 in the film “Steamboat Willie”.  Yesterday was his 86th Birthday.  He’s still pretty spry for such an old guy.  My own father is pretty close to the same age, born in about 1932.

And I… I was born in a blizzard in 1956, on November 17th, the day before his 28th birthday.  Don’t do the math.  I don’t really want to know how old I am.  I have six incurable diseases, and I may be adding a seventh to that, depending on what my cardiologist finds out.  I survived malignant melanoma in 1983.  I am deeply grateful for every day of the 31 years I have lived since.

This post started out as something about birthdays.  Mickey’s and mine (who am also Mickey)…  But I think it is really about numbers.  There are still important numbers to consider.  I have published two novels, Aeroquest and Catch a Falling Star.  I have one more novel that I signed a contract with PDMI Publishing for, Snow Babies.  It is the best story I ever wrote.  I have a finished manuscript, The Bicycle-Wheel Genius, that I am polishing to submit to the publisher in the spring.  I submitted a finished novel, Superchicken, that I am still waiting for word on, whether they will publish it, pass on it, or burn it and wave chicken feet over the ashes.  So I potentially have four books that could be in print soon.  I am feverishly trying to finish my novel The Magical Miss Morgan in draft form.  Why am I so feverishly trying to turn four books into five?  And then maybe five into six?  It is a question of time.  How much time do I really have left?  I confess to having at least twelve novel length stories that are only written in my head and outlined on paper.  The clock is ticking.  I want to share all of these stories, but I know I probably do not have 86+ years.  I truly believe that both this Mickey and that Mickey are capable of speaking to the ages, but it can only happen if I get my words shared so that somebody I do not know will read them, smile a little, laugh a little, maybe cry a little, and understand what I tried to say.

So here’s a self portrait of what Mickey once looked like (before the beard and long hair) along with Valerie Clarke, the main character of Snow Babies, and the most beautiful little girl ever born in Norwall, Iowa.