This is certainly not a book review. But I did read a Stephen King book, 1998’s Bag of Bones, which I picked up from the dollar sale shelves at Half Price Books. And I did love the story.

Mike Noonan, the protagonist, is a novelist who writes books that routinely land in the numbers 10 through 15 slots in the New York Times Bestseller List. Obviously, this first-person narrative is coming directly out of King’s own writing experience. But, remember, this is not a book review. I am discussing what I have learned about how King puts a story together.

King sets a back-story for this novel that digs deep into the geographica and historica of the city in Maine where the story is set. The literal bag of bones revealed in the book’s climax is almost a hundred years old. And he takes a compellingly realistic tour back in time to the turn of the Twentieth Century more than once to reveal who the undead characters are and why they do what they do. One thing that makes a writer, a novelist, truly solid is his ability to set the scene, to grow the story out of the background in the most organic and realistic way possible. But this is not a book review. I am saying that King always does this with his books. And if you wish to write at that level, you must do that too. I know I am sincerely trying.

At the end of the story, he clearly tells the reader that he learned from Thomas Hardy that “the most brilliantly drawn character in a novel is but a bag of bones”. So, he is definitely aware that a character is a construct that has to be crafted from raw materials. It takes a master craftsman to build one with the right words to make it live and breathe on the page. He does it masterfully in this book with several characters. The protagonist, the beautiful young love interest, the love interest’s charming three-year-old daughter who is nearly slain in a horrific manner at the end of the book… The living villain is a well-crafted bag of bones, as is the ghost, the actual bag of bones in the story. But this is not a book review. Most of his books, at least the ones I have read, have the same sort of masterful characters.

There is so much more to be learned about novel writing from this book. He literally shows you how ideas are captured, how they are developed into stories, how you overcome “writer’s block”, and Noonan’s book he is writing within this book is even used as an example of how to poetically advance the plot. But this is not a book review. You should read this book. It is a very good and scary piece of work. But you should read it because it shows us how to write and do it like a master.

Hearts in Atlantis (a book review) 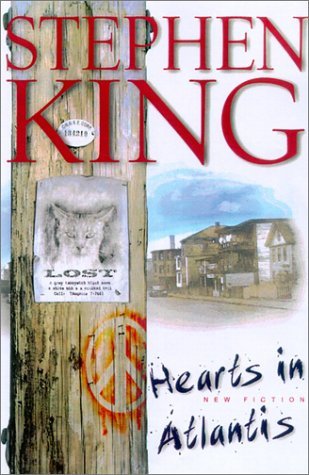 I finished reading this marvelous book over this dreary sunshiny weekend.  And I am totally surprised by how much I loved it.

This marvelous book, Hearts in Atlantis, is a book by Stephen King, whom I have always considered a dreary sunshiny popular writing hack.  I have learned by it, how wrong I have been all along about this author.  He is now established in my mind as a serious literary giant  (as opposed to a comic literary giant like Kurt Vonnegut or Terry Pratchett).  He deals with the emotions of fear, loss, angst, and regret, and so falls too easily into the horror writer category.  I misjudged him for so many years because I read Carrie, his first success, and Firestarter… well, I tried to read Firestarter and only got 40 pages in when it was due back at the library… and… I mean, I never fail to finish a book I have chosen to read.  And then I did.  But both of those books showed me a writer who was trying too hard, following some road map of novel writing borrowed from some other writer he admired.  And it all becomes formulaic and trite, sometimes even boring.  He is mimicking someone else’s voice.  I filed him in the “authors who are hack writers” drawer next to R.L. Stine. 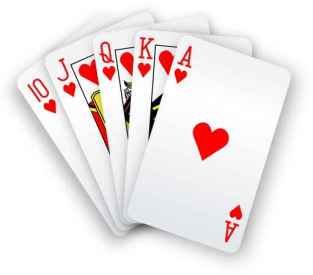 But this book proved me totally wrong.  I had to take King out and put him in a different drawer.  It starts out as a typical Stephen King monster story with a first section with a young boy as the protagonist and introducing us to the monstrous “low men in yellow coats”.  But it is a total trick to draw us in.  And it is even a very good monster story.  Like H.P. Lovecraft he has learned the lesson that a good monster story is not about the monster.  And showing us the monster directly is something that should only be done very briefly, at just the right moment in the plot.  Like the works of David Mitchell, this section connects you to threads from King’s other books, especially the Dark Tower series, which I must now read in the very near future.  Stephen King has learned through practice to write like a master.

But the theme doesn’t really start to score ultimate literature points until he tricks us along into part two.  The hearts in the title is actually the card game.  It is a card game that takes over the lives of college boys in a dormitory in the 1960’s.  They play it for money and it takes over their lives to the point that they flunk out of school at a time when that means they will be drafted and sent to Vietnam.  And the characters that are immune to the pull of the hearts game (also a metaphor for the second protagonist’s love life) fall victim to the urge to take on the government and protest the war.  Hence the “sinking of Atlantis” metaphor means the loss of innocence, and the devastation that comes from making choices when you are young that will haunt you forever. 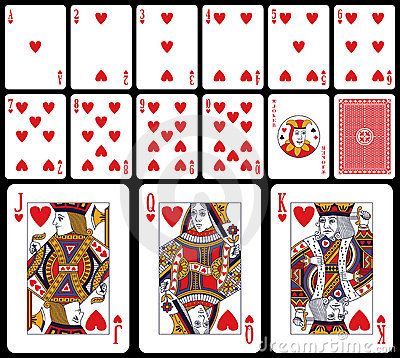 The post-war section of the book is filled with hubris, regret, lost love and stoic determination that is barely rewarded for only two characters in the entire plot.  I won’t of course, say anything that is a plot spoiler.  This is a horror story, and it is not my place to reveal the truth about the monster.  I can only tell you that this story is a devastating read for those of us old enough to remember.  And it is a fine work of dreary sunshiny fiction that frightens us with its truthfulness. 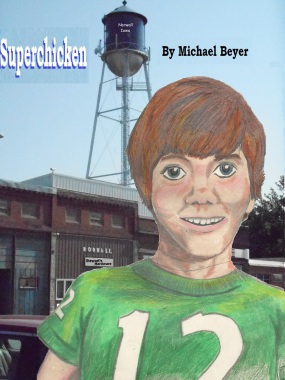 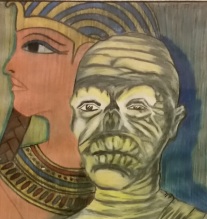 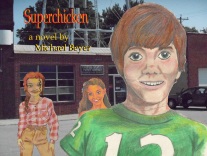 This post is about writer doubt. And Stephen King. Do those two things go together? If they don’t then Mickey is an awful writer and does not know how to do what he does. It would mean Mickey is icky. 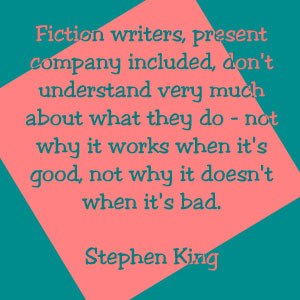 I used to think Stephen King was a totally over-rated writer. Back in the early eighties I read Carrie, King’s first novel, and got halfway through Firestarter, and had to give up. Partly because the book was overdue at the library, and also because I found the books mechanical and somewhat joyless in the writing. I thought he suffered greatly in comparison to writers I was in love with at the time like Ray Bradbury and Thomas Mann. I began to tell others that King was somewhat icky.

But King was obviously also somewhat successful. He began to get his books made into movies and people who don’t read discovered the evil genius of a man who tells stories to scare them and laces them with a bit of real humanity, real human feeling, and love.
I saw it first in Stand by Me. That movie, starring young Wil Wheaton as the Steven King autobiographical character, really touched my heart and really made for me a deep psyche-to-psyche connection to somebody who wasn’t just a filmmaker, but somebody who was, at heart, a real human being, a real story-teller.

Now, the psyche I was connecting to may very well have been Rob Reiner, a gifted story-teller and film-maker. But it wasn’t the only King movie that reached me. The television mini-series made from It touched a lot more than just the fear centers of my brain as well. And people whose opinions I respect began telling me that the books The Dark Tower Trilogy and Misery were also amazing pieces of literature.

So I picked up a copy of Hearts in Atlantis at Half-Price Books and began reading a Stephen King novel for the first time since the 80’s. MY HOLY GOD! King is not a little bit icky. He is so NOT ICKY that it makes Mickey sicky to have ever thought King was even a little bit icky! Here is a writer who loves to write. He whirls through pages with the writer’s equivalent of ballet moves, pirouettes of prose, grand jetés of character building, and thematic arabesque penchées on every side of the stage. I love what I have discovered in a writer I thought was somewhat icky. Growth and power, passion and precision, a real love of both the words and the story. He may not know what he is doing. But I know. And I love it. 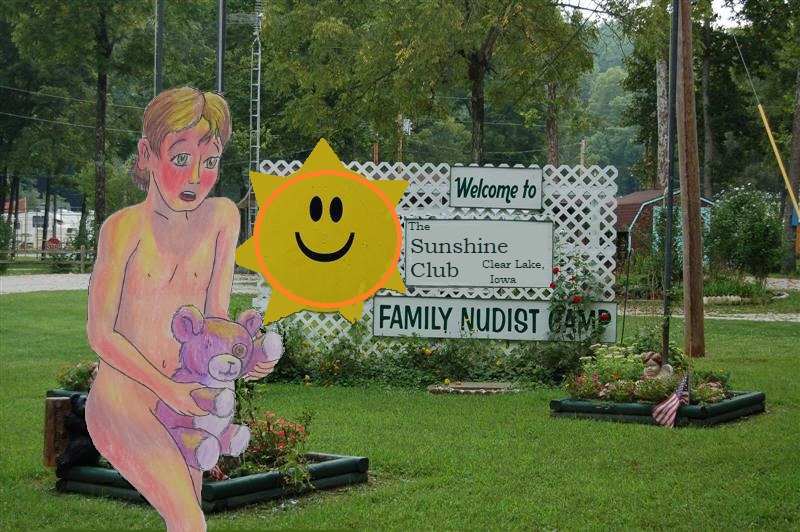 And so, while I have been editing the first novel I ever wrote, Superchicken, to make it ready for self-publishing, I have begun to ask myself the self-critical question, “Is Mickey really icky when he writes?” My first novel is full of winces and blunders and head-banging wonders that make me want to throw the whole thing out. But I can’t throw it out. It is the baby in the first bathwater that I ever drew from the tap. The answer to the questions of Micky ickiness have yet to be determined, and not by me. I guess I have to leave it up to you.