Back in about 1968 my Grandma Beyer was seriously scandalized by an artist named Paul Detlefsen.  Detlefsen did a lot of covers for the “Ideals Magazine” that Grandma always had on her coffee tables.  He scandalized her by putting a painting on the cover that showed a young boy taking his pants off, the rear view only, so he could go skinny dipping with a group of naked boys.  Truthfully the picture shown above is by Detelfsen, but it is not the one that offended her.  I have discovered that this painter of old-timey things like blacksmith shops and one-room school houses has painted at least four different versions of “the Old Swimmin’ Hole”.  And Grandma was easily scandalized when we were kids.  She was a very conservative woman who loved Ronald Reagan and his politics most severely and thought that Richard Nixon was a leftist radical.  She didn’t like for people to be naked, except for bath time, and maybe not even then.  She is one of the main reasons, along with this painter whom she adored, that I came to learn later in life that “naked is funny”.

Grandma Beyer also seriously loved puzzles, and besides “Ideals” covers, Paul Detlefsen did a beaucoup of jigsaw puzzles. (Beaucoup means a lot in Texican, I tend to think in Iowegian and talk in Texican and completely forget about the need to translate for those people who don’t know those two foreign tongues)   One of the puzzles we spent hours working on was “Horse and Buggy Days” that I pictured here.  They were the kind of puzzle paintings where every boy was Tom Sawyer and every girl was Becky Thatcher.  And there were a lot of them.  Here is another; 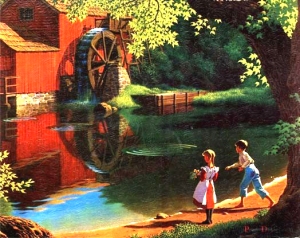 Grandma had this in puzzle form also.  We put the puzzle together, glued it to tag board, and framed it.  It has hung on the wall in a Grandparent’s house, first Grandma Beyer’s and then Grandma Aldrich’s, since the early 1970’s.  My own parents now live in Grandma Aldrich’s house, and that puzzle-painting may be hanging in an upstairs bedroom to this very day.  Detlefsen is not known as a great artist.  He was a humble painter who painted backdrops for films for over 20 years.  In the 1950’s he switched gears and started doing lithographs that were turned into calendars, jigsaw puzzles, laminated table mats, playing cards, and reproductions you could buy in the Ben Franklin Dime Store in Belmond, Iowa and hang on your back porch at home.  I believe I saw his paintings in all these forms in one place or another.  According to Wikipedia (I know, research, right?) “In 1969, UPI estimated that his artwork had been seen by 80 per cent of all Americans.”  That is pretty dang good for a humble painter, better numbers than Pablo Picasso ever saw.  Let me share a few more of his works, and see if you recognize any of these; 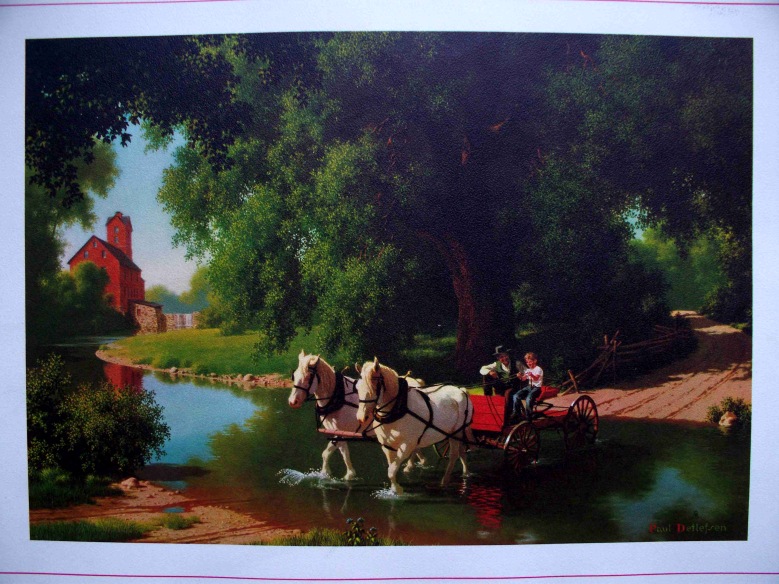 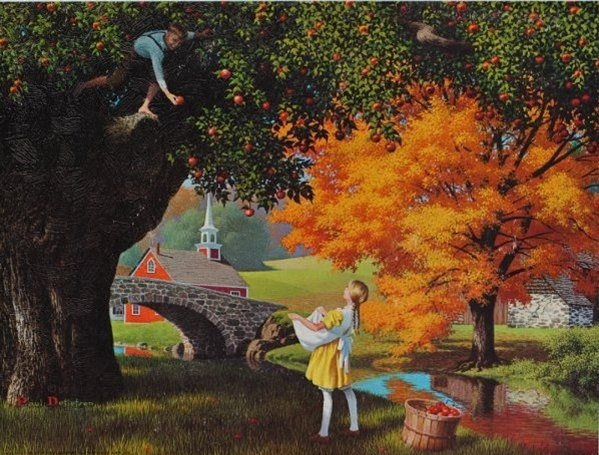