In college I took classes in oral reading and acting because I was nutty about drama and play-writing, even though I was much too terrified of being put on a public stage to ever try out for a part.  But in Oral Reading 101 I was given the gift of a professor who actually was the head of the ISU Drama Department.  One of the things he made us do was a soliloquy from a Shakespeare play.  I was assigned the opening soliloquy from Richard the Third.

Good God!  Is that man ever a villain and a monster!  He’s more sinister and evil than Snidely Whiplash or Dick Dastardly… and certainly no less cartoonish.  Here is the best I can still do to recreate my old college performance of “The Winter of Our Discontent” soliloquy.

To pull off this assignment (On which I received an A grade from a professor known for imperious F-giving) I had to do a lot of research on King Richard III to be able to walk around in his skin for three whole minutes.  I had to learn about him from books and articles and drama critiques.  I spent a couple of weeks in the library (There was no internet or Google in 1978).  I learned that he was a complex man involved in the deeply troubled time of the War of the Roses.  He was from the house of York, the House of the White Rose.  His elder brother, Edward, had been  victorious in both battle and royal intrigue, and, with Richard’s help had secured the throne of England that had been wrested from the hands of Richard II to begin the struggle between House Lancaster (the Red Rose) and House York… both of which had blood-relationship claims to the throne.  Once in the hands of Richard’s brother Edward IV, the crown did not really rest peacefully on Yorkish heads.  Edward became ill and died in 1483.  The crown was to then go to twelve-year-old Edward V who was placed under the care of Uncle Richard’s regency.  At the time of his coronation, the legitimacy of Edward IV’s marriage was declared null and void, making the boy no longer eligible to be king.  Richard seized the title.  Young Edward and his younger brother were taken to the Tower of London and they were never seen publicly again.  According to Shakespeare, Richard did, in fact, have them killed.  But, the crown did not stay on Richard’s head for longer than two years.  In 1485 Henry Tudor came back to England from France.  Richard was defeated at the Battle of Bosworth Field and died in battle there.

I do actually understand Richard in ways that are difficult to admit.  I know what it feels like to be convinced you are unworthy by factors beyond your control.  Richard was a hunchback, plagued with severe scoliosis of the spine.  He lived his life in pain and was ridiculed for his deformity in a time where it was believed such things were a punishment from God for sins of the parents, or even sins the child himself was born with.  I can relate.  I was always so far above the other kids in my class at school that I was treated like a Martian, unloved and unlovable because I could not speak a language they really understood.  And on top of that, I was secretly the victim of a sexual assault, a condition that I feared made me a monster.  I could so easily have become a monster.  I could’ve set my mind to it in the same way Richard did, because vengeance for his differences consumed him utterly.  Thankfully, I did not choose a path of evil.  Drawing and telling stories proved to be the pick and shovel I used to dig myself out of my own pit of despair. 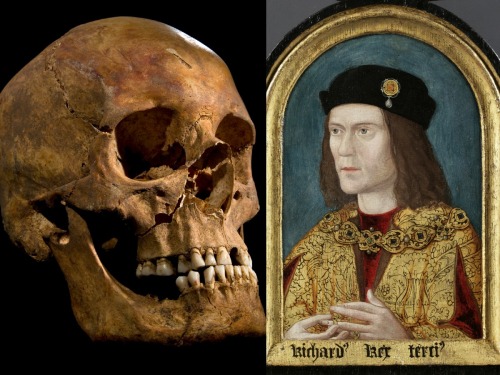 Richard III’s long-forgotten grave was rediscovered in 2013, and a DNA match with relatives proved the skeleton with scoliosis was him in 2014.

The real Richard III may not have been the monster Shakespeare portrayed him as, either.  He was demonized after his defeat and death by the Tudors to strengthen their shaky claim to the throne.  There exists some evidence that he was a progressive king and a friend to his people, but horribly betrayed by some of his own followers, and certainly made the scapegoat by succeeding generations. 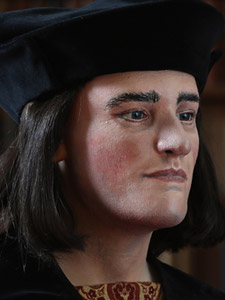 A recreation of what Richard III looked like based on the skull found and portraits from the time period.

There is also some evidence that Shakespeare wrote the play as a political diatribe against the hunchback in the royal court of his day.  Sir Robert Cecil, 1st Earl of Salisbury was also a hunchback with scoliosis.   And by his sometimes sinister-seeming machinations, he rose to power as Secretary of State for both Elizabeth I, and after her, James I.  He had a part to play in making James the King after Elizabeth’s long reign, probably an instrumental part.  He also uncovered the Gunpowder Plot of Guy Fawkes and friends, and rumors persisted that he had more to do with it than merely revealing and foiling it.  Nothing was ever proven against him.  Though Elizabeth called him “my pygmy” and James referred to him as “my little beagle”, he held power throughout his lifetime and foiled the work of his many enemies against him.  In fact, it is the similarities between Shakespeare’s Richard III and Robert Cecil that first made me begin to believe that Shakespeare was actually someone other than the actor who owned the Globe Theater and never spelled his own name the same way twice.  Knowing about Cecil surely needed to be the act of an insider in the royal court.  I balked at first when it was suggested to me that Shakespeare’s plays were actually written by Francis Bacon… and I continued to doubt until I learned more about the Earl of Oxford, Edward deVere.

So what is the point of this soliloquy about the soliloquy of Richard III?  Well, the point is that at one time I had to be him for a short while.  I had to understand who he was (at least the character that Shakespeare created him to be) and think as he thought.  That is what a soliloquy truly is.  Sharing from the character’s mind to my mind… and back again if I am to perform him… or even write him in some future fiction.