Thanks for the Memories, Mr. Disney

This post is going to sound an awful lot like stuff and nonsense, because that is what it primarily is, but it had to be said anyway.    Last night my family took me to see the movie Saving Mr. Banks, a deeply moving biographical story of P.L. Travers, the creator of Mary Poppins, and how she had to be convinced to surrender her beloved character to the movie industry which she so thoroughly detested and distrusted.  It is also about one of my most important literary heroes, Walt Disney, and how he eventually convinced the very eccentric and complicated authoress to allow him to make her beloved character into a memorable movie icon.

“We create our stories to rewrite our own past,” says Disney, trying to tell Mrs. Travers how he understood the way that her Mary Poppins character completed and powerfully regenerated the tragedy of her own father’s dissolution and death.  This is the singular wisdom of Disney.  He took works of literature that I loved and changed them, making them musical, making them happy, and making them into the cartoonish versions of themselves that so many of us have come to cherish from our childhoods.  He transforms history, and he transforms memory, and by doing so, he transforms truth.

Okay, and as silly as those insights are, here’s a sillier one.  In H.P. Lovecraft’s dreamlands, on the shores of the Cerenarian Sea, north of the Mountains of Madness, there roam three clowns.  They are known as the Boz, the Diz, and the Bard, nicknames for Charles Dickens, Walt Disney, and William Shakespeare.  These three clowns, like the three fates of myth, measure and cut the strings of who we are, where we are going, and how we will get there.  They come to Midgard, the Middle Earth to help us know wisdom and folly, the wisdom of fools.

Why have I told you these silly, silly things?  Do I expect you to believe them?  Do I even expect you to read all the way to paragraph four?  Ah, sadly, no…  but I am thinking and recording these thoughts because I believe they are important somehow.  I may yet use them as the basis of a book of my own.  I enjoy a good story because it helps me to do precisely as Mr. Disney has said, I can rewrite my own goofy, silly, pointless past. 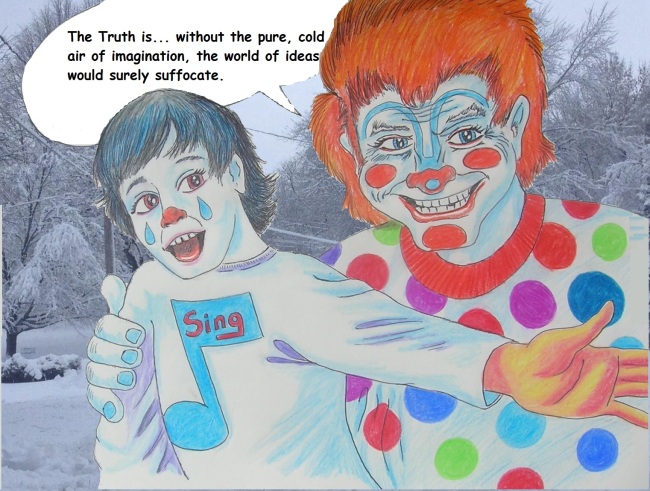 One response to “Thanks for the Memories, Mr. Disney”