The hardest dream-to-reality connection to make is my duck nightmare.  I know I bummed the world out yesterday with unfunny dream deliberations.  But in this post I explore the lighter side of nightmares.  It all began when I was about four years old and we went to the Deer Park Zoo in Mason City, Iowa.

Truthfully, when you look at it from the proper point of view, at four you are small and all animals look like monsters.  The three ostriches they had in a chicken-wire pen were at least several hundred feet tall.  The deer were huge with giant Bambi-eyes.  I was little and still very much in a touchy-feely stage of life.  And the goose-pen had a large hole in the front, just large enough for a goose head and neck to fit through at high speed.  That is exactly what happened when one wide-eyed nerd-child wandered close enough to give a gander a premium chance at a beak-first goosing.  Whether my pants had to be changed immediately afterwards is something I have yet to work up the courage to ask my parents about.  No rush.  They are only in their eighties now.

Anyway, I was left with a recurring nightmare, always involving a duck or very similar waterfowl with big, massive, white dentures.  Yes, you heard right, a duck with teeth.  It’s all right for you to laugh now, but I woke up in cold sweat every single time I had that nightmare.  Right from the moment when I realize that the evil little duck-mind has fixed its wishes on taking a nice, big bite, to the split second where the toothy duck-head zips towards me, I am gripped with total existential terror.  And it wakes me up. 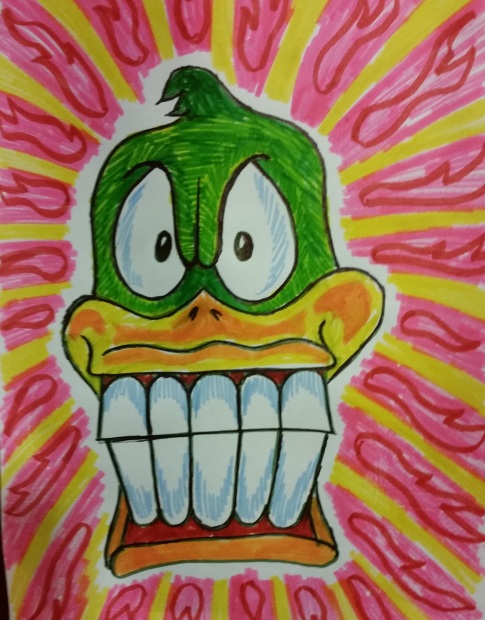 So what does this doozy of a dream mean?  Do dreams have to have a meaning?  All two-hundred-plus times?  (I lost count, so sue me.)  I do believe, however that it must be some kind of anxiety dream.  And the last occurrence was now four years ago, so the possibility of duck-dream remission is very real to me.

If my last post chilled your innards, then hopefully this one lit them up with laughing gas.

This closing Paffooney from yesterday is entitled “The Leap of Faith”.  I’m not sure why that is important to know, but it is.