Tag Archives: happiness to the point of stupidity

Toccata and Fugue in D Minor

Johann Sebastian Bach may or may not have written his organ masterpiece, Toccata and Fugue in D Minor in 1704.  All we know for sure is that the combined efforts of Johannes Ringk, who saved it in manuscript form in the 1830’s, and Felix Mendelssohn who performed it and made it a hit you could dance to during the Bach Revival in 1840 made it possible to still hear its sublime music today.  Okay, maybe not dance to exactly…  But without the two of them, the piece might have been lost to us in obscurity.

The Toccata part is a composition that uses fast fingerings and a sprightly beat to make happy hippie type music that is really quite trippy.   The Fugue part (pronounced Fyoog, not Fuggwee which I learned to my horror in grade school music class) is a part where one part of the tune echoes another part of the tune and one part becomes the other part and then reflects it all back again.  I know that’s needlessly confusing, but at least I know what I mean.  That is not always a given when I am writing quickly like a Toccata.

I have posted two different versions for you to listen to in this musical metaphor nonsensical posticle… err… Popsicle… err… maybe just post.  One is the kinda creepy organ version like you might find in a Hammer Films monster movie in the 1970’s.  The other is the light and fluffy violin version from Disney’s Fantasia.  I don’t really expect you to listen to both, but listening to one or the other would at least give you a tonal hint about what the ever-loving foolishness I am writing in this post is really all about.

You see, I find sober thoughts in this 313-year-old piece of music that I apply to the arc of my life to give it meaning in musical measure.

This is the Paffooney of this piece, a picture of my wife in her cartoon panda incarnation, along with the panda persona of my number two son.  The background of this Paffooney is the actual Ringk manuscript that allowed Bach’s masterwork not to be lost for all time.

My life was always a musical composition, though I never really learned piano other than to pick out favorite tunes by ear.  But the Bach Toccata and Fugue begins thusly;

The Toccata begins with a single-voice flourish in the upper ranges of the keyboard, doubled at the octave. It then spirals toward the bottom, where a diminished seventh chord appears (which actually implies a dominant chord with a minor 9th against a tonic pedal), built one note at a time. This resolves into a D major chord.

I interpret that in prose thusly;

Life was bright and full of promise when I was a child… men going to the moon, me learning to draw and paint, and being smarter than the average child to the point of being hated for my smart-asserry and tortured accordingly.  I was sexually assaulted by an older boy and spiraled towards the bottom where I was diminished for a time and mired in a seventh chord of depression and despair.  But that resolved into a D major chord when the realization dawned that I could teach and help others to learn the music of life.

And then the Fugue begins in earnest.  I set the melody and led my students to repeat and reflect it back again.  Over and over, rising like a storm and skipping like a happy child through the tulips that blossom as the showers pass.  Winding and unwinding in equal measure, my life progressed to a creaky old age.  But the notes of regret in the conclusion are few.  The reflections of happinesses gained are legion.  I have lived a life I do not regret.  I may not have my music saved in the same way Johann Sebastian did, but I am proud of the whole of it.  And whether by organ or by violin, it will translate to the next life, and will continue to repeat.  What more can a doofus who thinks teaching and drawing and telling stories are a form of music ask for from life? 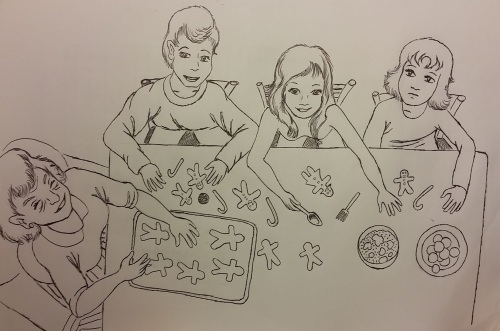 This is the pen and ink start of an illustration of the novel I am working on, Recipes for Gingerbread Children.

I admit that my obsession with the benefits of gingerbread is mostly in my head.  Specifically, in my sinuses.  I find products with ginger in them, diet ginger ale, ginger teas, and especially gingerbread cookies, help reduce the tightness in my COPD-laced lungs, clear my sinuses, and make breathing mercifully easier.  Gingerbread cookies are also seasonally wonderful in that they are slightly Christmassy and help bring my family together.

So, yesterday, a Saturday, my daughter the Princess and I executed a perfectly evil plan to commit evil acts of gingerbread and whip up some wicked little gingerbread men in a frenzy of deliciously evil bakery. 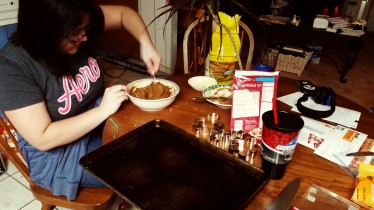 Okay, maybe not evil exactly…  but I have diabetes and the Princess desperately wants to lose some weight, neither condition being one that benefits by having the temptation of wicked little gingerbread men around. 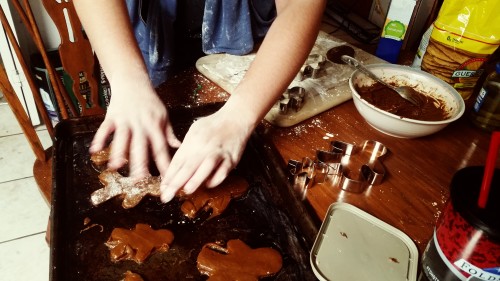 And, as with any evil plan, many things proceeded to go awry.  We did not have any actual flour available to make the gingerbread dough less butter-and-egg sticky.  All we had was some corn starch… which had bugs in it.  After struggling to craft sticky little bodies a few times, we decided to go ahead and use the tainted corn starch.  After all, a few little larvae that get overlooked and not picked out will only add a bit of extra protein, right? 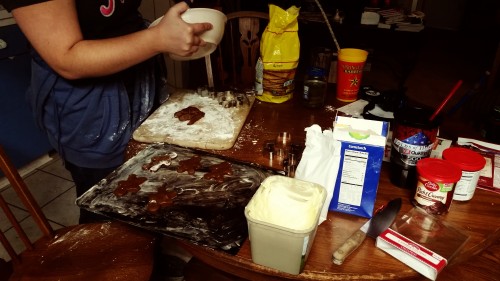 And we had the added bonus that you can make just as much mess with corn starch and margarine as you can with flour and butter! 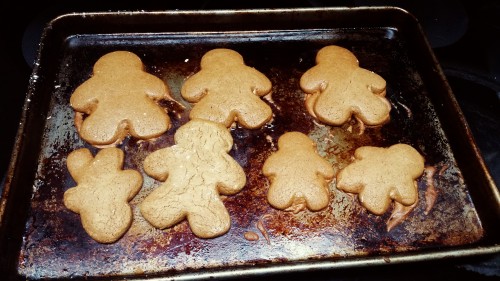 But we did get the corn-starchy little buggers baked.  (And they were probably literally buggers due to the potential for having bugs in them.  Oh well, it should fortify the old immune systems.) 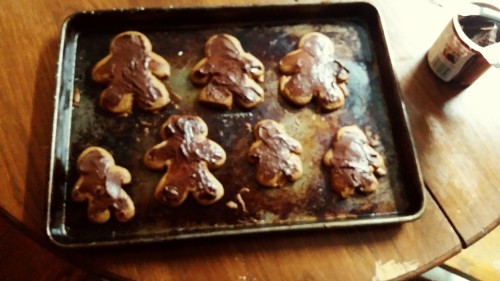 The only decoration we had was chocolate frosting, since someone ate all the sprinkles and sugar dots we bought last year for the gingerbread house.  (Don’t look at me.  I have diabetes.)  So we frosted them, prompting the Princess to begin calling them “little burnt souls blackened in hell”.

So then the cookie cannibals could allow the eating to begin.

Okay, I know it looks like the Princess did all the work, and all I did was eat them.  But somebody had to do the hard work of taking all the pictures, right?

I was scratching my head about what to post (a plan of action that never works as well as actually thinking about it) when I came across an email from PDMI Publishing. They have accepted my novel Snow Babies and are planning to publish it. Hurray! No more thinking for today!