The Coronavirus Isolation has put a lot of new limitations on our lives. But, I happened to have an unused Gingerbread House kit. So, for Art Day, the Princess and I decided to put it all together with supplies we already had on hand. Here, then, is the Beyer Family Gingerbread House 2020.

But, it wasn’t a total disaster. We can use our inherent craftiness to rescue it at least a little bit from total wicked-witch-housiness. Though I am sure Hansel and Gretel would still eat it.

The last couple of years we have started a new Christmas tradition, making a gingerbread house together. Of course, any Christmas tradition for my kids is a new one. We were Jehovah’s Witnesses up until recent years when the Brotherhood left us behind. You probably know already that it is against their religion to celebrate traditional holidays like Christmas. And I bear them no ill will for anything, but their ways are really not my ways anymore. So, since we are having our fourth Christmas mini-tradition, I prepared by finding gingerbread kits on sale at Walmart. I am not Scrooge anymore, but I still need to cut costs for poverty reasons.

I scored this one for only $5 because the Christmas rush is ending and they are trying to sell out the goodies that are growing old on the shelf. My daughter the Princess saw this and immediately declared she was looking forward to biting the head off Charlie Brown.

I responded to her somewhat-unexpectedly hostile comment against a cartoon character I love and identify with by showing her the back of the box.

The Charlie Brown figure will be the cardboard cut-out from the back of the box. The only candy figure is Snoopy. Of course, she then promised to decapitate and then cannibalize Snoopy. The girl ordinarily likes cartoons, so I don’t fully understand the double meaning behind her ravenousness.

As an added challenge to our artistical gustatory creativeness I also scored this gingerbread train, seen here pulling across the tracks at the Toonerville train station. All aboard! That won’t last long if we get it made this year. Of course it will fossilize if we try to save it for next year.

That, then, is the evil plan for Christmas that we are probably not supposed to be celebrating. But we will not roast in Hell for executing this evil plan. Jehovah’s people don’t believe in Hell.

Gingerbread Recipes for the Future

I have been suffering through bad day after bad day recently.  I had a fender bender.  My favorite football team got plowed into the turf in the playoffs.  I have been suffering a great deal from weather-induced arthritis pain, low blood sugar, and viral infections.  And I even reached the download limit on my WordPress account, meaning I will have to pay more money to post new pictures.

But this blog is percolating along at 30 views per day or more.  I am being read and exposed to the light more than I ever have in my whole writing life.  That doesn’t earn me a penny, in fact, it costs me money, but it has to be a very good thing.  I deal with pain and hardship through creativity.  I create things to make it better.

When I was a kid, there was a little old German lady that lived in our little town.  She had a tattoo on her forearm.  She had been in a concentration camp in Poland in the 1940’s.  But , living as an Iowan, she was the most cheerful and loving old lady I knew.  She gave me chocolate bars for holding the door open for her at the Methodist church.  She gave homemade cookies to all the kids constantly.  She did not have any children of her own for very sad reasons that no one ever talked about.  She loved it when children visited her at her little tar-paper-covered house that we nicknamed “the Gingerbread House”.  I vividly remember being there one cold winter night after choir practice when she gave us gingerbread cookies and hot chocolate.  She told us on that snowy winter evening, “Gingerbread makes everything better.”

I have to believe that philosophy is essentially correct.  My stories are like gingerbread.  If I cook them just right, they will have that good ginger taste that soothes all hurts and longings.  So, I started putting together a story in honor of her.  She is already a character in several of my stories.  But I needed one where Grandma Gretel was the main character.  And it has to be about baking gingerbread and telling stories.  In fact, I think I will bake a little magic into it.  The gingerbread men she bakes will actually come to life.  And I will put together a theme about overcoming the darkness with a smile and wink and a recipe for gingerbread.

I believe I did warn you that I had serious Gingerbread House plans.  I had high hopes and spent more money on it than I should have.  Such is life in Mickey World.  But I had a plan, and not even disaster was going to stop me.  And it didn’t. 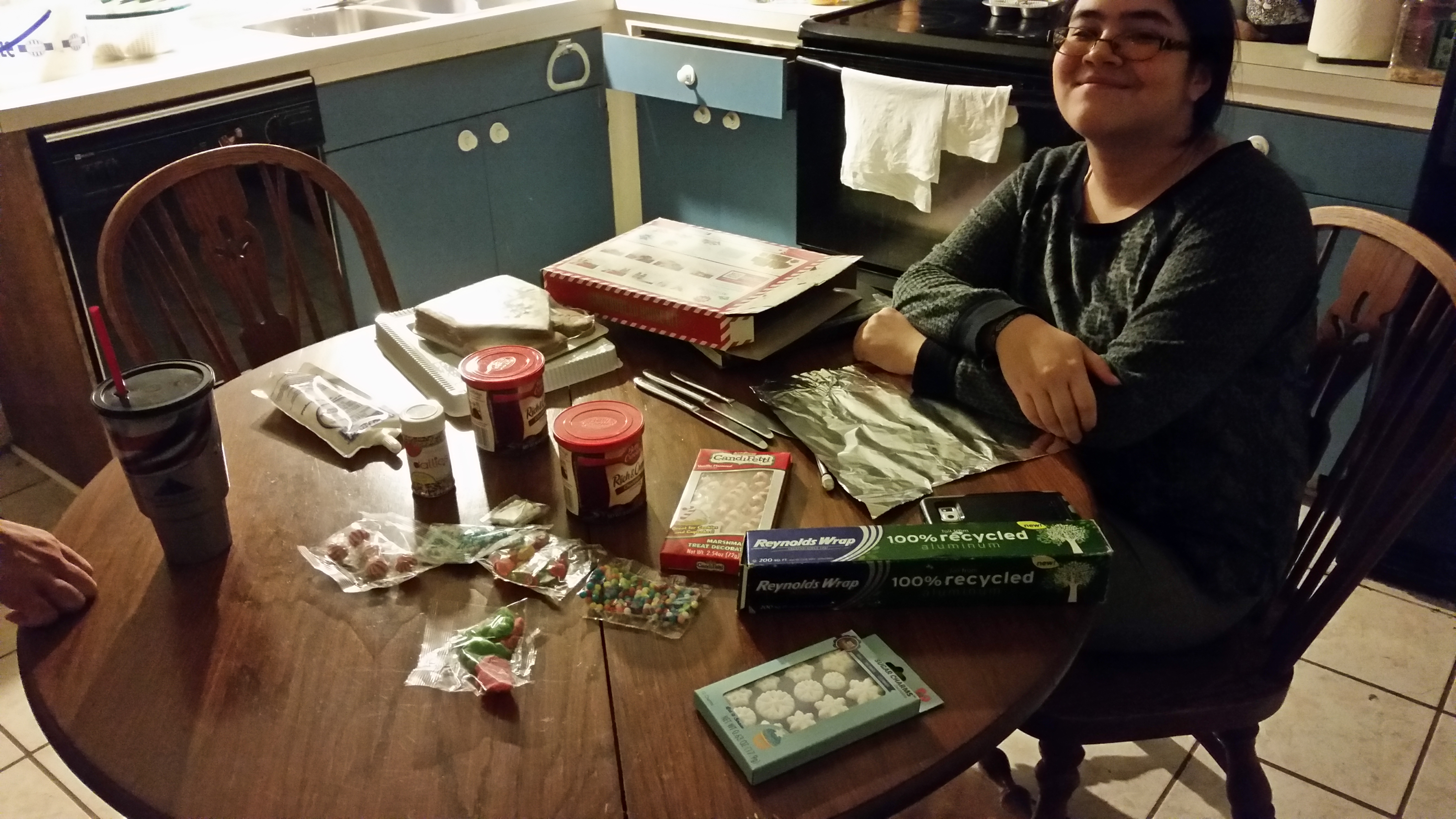 I didn’t intentionally choose a time when Mom was away, but maybe that was at least subconsciously a factor.  You see, as sober Jehovah’s Witnesses we are not allowed to celebrate Christmas.  And no one says gingerbread is specifically Christmassy.  So we broke out the necessary supplies and started down paths of frosting and sugar plums. 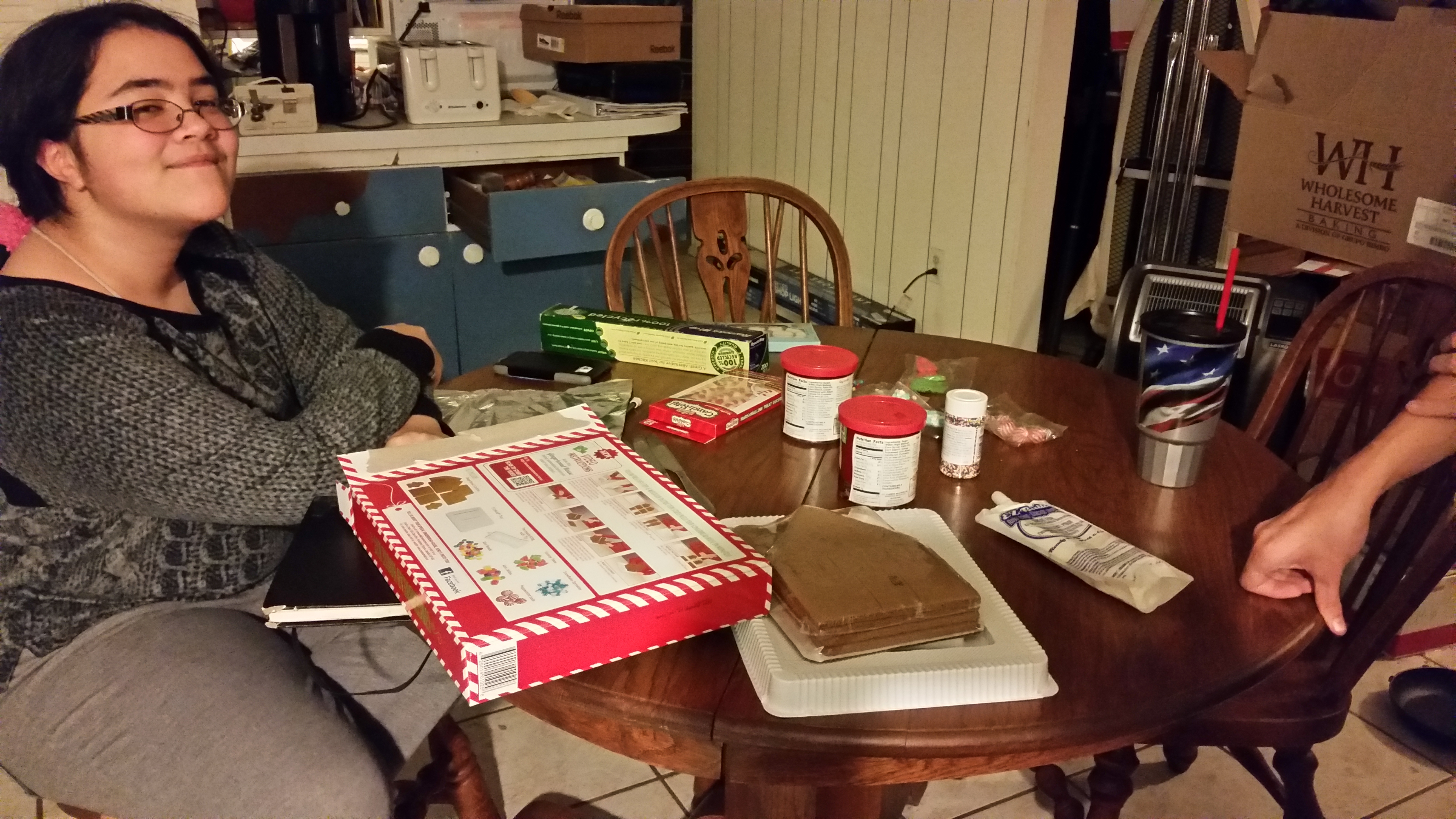 I warned them that the main objective was to write a blog post.  The Princess broke out a fake smile for the occasion, but Henry decided to duck out of pictures to the best of his ability.  Hands are okay, I guess. 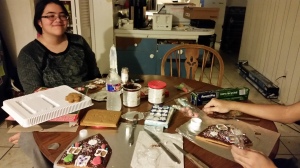 We proceeded with great care according to my evil plan.  And everything seemed to be going well.  Of course, da Momma had to show up to say, “What’s this?  You’re celebrating Christmas?”

It was really starting to look like a success.  But Mom started eating building supplies.  And the whole thing was constructed according to directions, so the weight of the heavily frosted and decorated roof was supported only on the strength of quick-drying frosting that didn’t really dry fast enough.  The dream began to slowly slide apart. 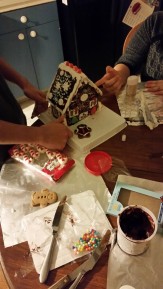 Furious finger supports became absolutely necessary.  We battled to keep it from slipping apart into sugary oblivion.  But what could we ultimately do?  One final picture before the inevitable maybe? 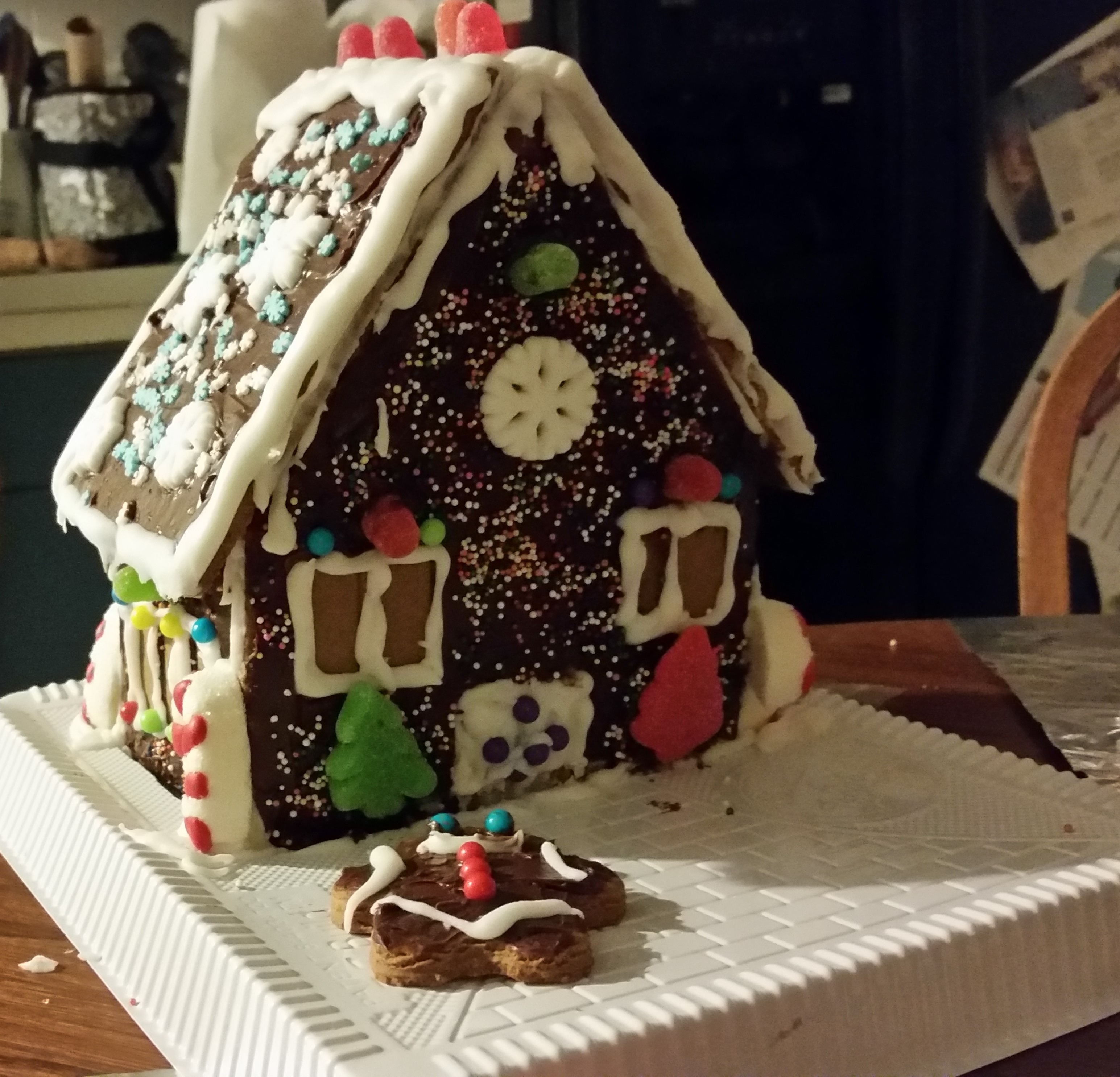 And then… the end.

But, I think in looking back on it, even though clean-up would prove nearly fatal for old diabetic me… it was a success.  We got away with a bit of Christmas.  My family (except for Dorin who is away this holiday overseas with the Marine Corps) got to spend some quality time together.  We got to make something we were proud of, if only momentarily.  And we had enormous amounts of fun and laughter.  The best things in life are like that.  They are only with us for a moment.  But the memory is a treasure to keep for a lifetime.