Having successfully binged on the current first season of the television series Quantico, I was determined to try something different on the second try.  I turned to the HBO series Band of Brothers.  Now, I admit, being a war buff of the worst kind in every way, I have seen the entire thing before when it was broadcast on TBS back in 2003.  The thing is, I did not have all the tools at that time necessary to fully appreciate and understand the dramatic arc of the story.  I found it practically impossible to keep up with all the many characters who come and go so quickly.  Some are introduced for the first time in the same episode in which they are killed.  Some are wounded, leave for an episode or two… or four, and then return as if we are supposed to remember them in their entirety.  So the secret magical spell I employed this time around for better and more intimate understanding is…  I read the damn book.

Having read the book, I now had all the background information I needed on each of the characters.  I could begin to match names and faces from the cast list of each episode with the real people I read about in the book, and the real people who matched those characters in the movie from the brief interview segments at the start of several episodes.  I began to understand why so much of the film was devoted to the stories of Major Dick Winters, C. Carwood Lipton, and Sergeant Don Malarky… these being men who led Easy Company of the 101st Airborne through the most terrible parts of the war and lived to tell the stories that got made into the book and then the series.  I really began to appreciate the heroics of people like Sergeant “Wild Bill” Guarnere who found out his brother had died in combat in Italy the night before the big D-Day parachute jump, and ended up losing his leg in the Battle of the Bulge, at the defensive stand in Bastogne.  I learned more about the key leadership role of Bull Randleman who was separated from Easy Company in Einhoven and spent a night hiding from the German troops during the failed Operation Market Garden.  I felt the deep hurt felt by people like Eugene “Doc” Roe the combat medic as he tried and repeatedly failed to treat horrible war wounds.  They are not just characters in a war movie any more.  I feel like I know them as people.

Things about war and good war movies leave me in tears constantly.  They grind up my soul and leave me sick at heart that people could be guilty of such things.  I almost had to look away at times during the concentration camp episode. 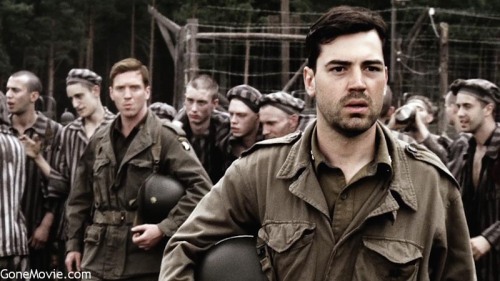 Winters quietly orders his soldiers to open the prison gates

But ultimately it feels like a series like this is good for the soul.  You can’t truly know how good and heroic people can actually be until you see how they live through and conquer these terrible experiences.  And it is good to see an excellent book brought faithfully to life like this.  It helps me lie to myself that writers can have a worthy effect upon life, the universe, and everything.