Being Old Enough to Know Better…

I am the man from the Setting Sun,

Come to the future to deliver the past.

What does that even mean, that silly little two-line poem I wrote twenty years ago?  Am I not old enough to know better than to create a snippet loaded with goofy contradictions?  Apparently not.  But I am old enough to deliver the past.  I have been around long enough that I remember when President Kennedy was assassinated.  I saw Neil Armstrong take that “small step for man” on the surface of the moon.  I have learned a number of lessons from the past.  And as a writer, I can deliver those lessons in the form of stories.  I was born in a different century.  I have been around for more than half of one… approaching two thirds.  I have collected all kinds of wonderful things in my goofy old brain.  And make no doubt about it, with six incurable diseases and being a cancer survivor since 1983, my Sun is about the set.  So, I have a mission, to open the eyes of people who are too foolish to avoid listening to what I have to say, or to read what I have written.

I saw The Sound of Music starring Julie Andrews in the Cecil Theater in Mason City, Iowa in 1965 when I was not yet ten years old.  I heard the song My Favorite Things for the very first time on the old black and white Motorola TV set in the clip I posted at the start of this post.  Kukla, Fran, and Ollie was a puppet show I never missed on Saturdays if I could help it.  In a world before video games and computers and even color TV, kids still had priorities.  And my world was definitely a world of imagination. 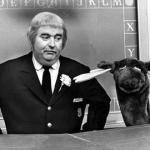 Fess Parker as Davy Crockett, and then as Daniel Boone

So, what kind of knucklehead must I be to think younger folks would want to know about any of this stuff from the time of dinosaurs and black-and-white TV?  I write books that are basically genre-breakers and about way too many different things to make sense to adults.  As a result, I classify myself as a Young Adult novelist, a writer for children… but not the beginning reader kind, or the early chapter-book kind… the kind like Huckleberry Finn, To Kill a Mockingbird, Light in the Forest, or Dicey’s Song.  I write books about what it was like to be a kid in the past… the 1960’s, 70’s, 80’s, and 90’s… last century.  And I have some knowledge and expertise in this area because I was one of those teachers during that time period that got to know the kids in my classes.  I made the horrifying mistake of actually talking to kids, asking them about their lives, and listening to their answers.  I talked about all manner of things with all manner of kids… brilliant things and stupid things… with dumb kids, smart kids, smelly kids, charming kids, and the kids everybody else hated.  You know… I did all the stupid mistakes that teachers who have no earthly idea how to do discipline would do, and got those kids to learn to behave at least halfway like human beings by being somebody they trusted and respected and… on rare occasions… believed.  Right now I am working on Snow Babies.  It is set in 1984.  And I hope to be good enough of a Sunset Man to be able to deliver it to the future.