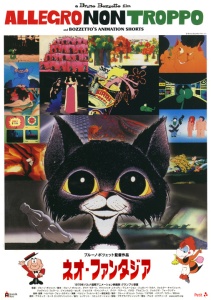 In musical terms, Allegro Non Troppo means fast tempo, but not too fast.  So, I recently discovered that Allegro Non Troppo is one of many rare and obscure old movies which I am passionate about that can be found in its entirety on YouTube.  I will include the YouTube link to a portion of it at the end of this post, and I sincerely recommend that if you have never seen this movie, you watch the whole thing at least once.  No matter how many cringes or winces or blushes it causes, this is a movie of many bizarre parts that you really need to take in as a whole.  It ranges from the ridiculous to the sublime, the atrociously ugly to the lyrically beautiful, from the brilliant classical score being played by a mistreated band of old ladies with orchestral instruments to a gorilla running amok,  from Debussy to Ravel, from an artist released from his cage to single-handedly draw the animation, to a satire rich with baudy humor making fun of no less a work of animation than Prisney’s..  I mean Disney’s Fantasia.  The dark elements are there.  The light-hearted, lilting comedy is there.  The fairy tale delicacy and technicolor dreaming is all there.

And why should this be important to me?  Especially now that I am retired from a long and fruitful teaching career?  Well, I have history with this movie.  I saw it first in college.  I was an English major, but I took every film as literature class I could fit into my silly schedule.  As an undergrad, I was determined to be a cartoonist for a career.  I took classes seriously and aced most of them, but I was at college to intellectually play around.  I didn’t take the prescribed courses to be an English teacher.  That had to wait for the more responsible me to come along in grad school for that.  I saw both Fantasia and Allegro Non Troppo during one of the play-time years.  Much as the old satyr in Claude Debussy’s Prélude à l’après-midi d’un faune, I was enamored with sensory experience.  I took my first girlfriend to see Disney’s Fantasia, and she later turned down the opportunity to see Allegro Non Troppo with me.   Good sense on her part, but the beginning of the end of our relationship. 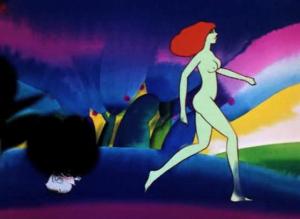 Just as Fantasia has the part in it where Stravinsky’s Rite of Spring describes evolution from the beginning of the Earth to the end of the dinosaurs, Allegro Non Troppo uses Ravel’s Bolero to describe the evolution of life on a weird planet from germs in a discarded Coke bottle to the inevitable coming of the malevolent monkey who is ultimately us.  And, of course, the satire would not be complete without some off-set for Dukas’ The Sorcerer’s Apprentice. 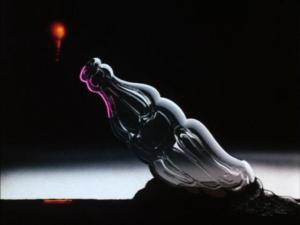 As near as I can figure it out, the apprentice, played by Mickey Mouse, becomes the snake from the Garden of Eden in Allegro Non Troppo.  When the snake is unable to get Adam and Eve to eat the apple, he makes the mistake of eating the apple himself.  He learns the hard way that, no matter how clever, even diabolically clever, you think you are, you are not really in control of anything in life.  Every would-be wizard in the world has to understand that he is powerless without hard experience.  And what a boring world full of naked people this would be if there were never any apprentices in it foolish enough to actually become wizards.

rse, I haven’t really talked about the most heart-twisting part of Allegro Non Troppo… the sad cat wandering the ruins of his former home, or the most laugh-aloud part with the super-tidy little lady-bee trying to eat a blossom, but being interrupted by a couple of picnickers.

But the thing is, this movie is a timely subject for me.  Not only did I, just yesterday, rediscover it, but it still has the same meaning for me now as it did when I first saw it.  Then I was an aspiring young artist who loved this movie because it approached ideas non-consecutively, just as I approached my learning years… rambling here and there, finding first a bitter-sweet something, and then a sad beauty behind everything in life.  And it is where I am again now, in a poor-health enforced retirement… divorced from teacher’s schedules and time itself.  Able to do as I please, and aspiring once again to commit great acts of art. 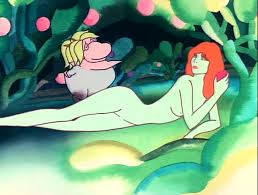