Why Do You Think That? (Part Two)

In my short, sweet sixty years of life, I have probably seen more than my share of movies.  I have seen classic movies, black-and-white movies, cartoon movies, Humphrey Bogart movies, epic movies, science fiction movies, PeeWee Herman movies, Disney movies, Oscar-winning movies, and endless box-office stinkers.  But in all of that, one of the most undeniable threads of all is that movies make me cry.  In fact they make me cry so often it is a miracle that even a drop of moisture remains in my body.   I should be a dried-out husk by now.

I wept horribly during this scene.  Did you?

And the thing is, people make fun of you when you cry at movies.  Especially cartoon movies like Scooby Doo on Zombie Island.  (But I claim I was laughing so hard it brought tears to my eyes.  That’s the truth, dear sister.  So stop laughing at me.)  But I would like to put forth another “Why do you think that?” notion.  People who cry while watching a movie are stronger and more powerful than the people who laugh at them for crying.  A self-serving thesis if ever there was one.

Movies can make you cry if you have the ability to feel empathy.  We all know this.  Old Yeller is the story of a dog who endears himself to a prairie farm family, saves Travis’s life at one point, and then gets infected with rabies and has to be put down.  Dang! No dry eyes at the end of that one.  Because everyone has encountered a dog and loyal dog-love somewhere along the line.  And a ten-year-old dog is an old dog.  The dogs you knew as a child helped you deal with mortality because invariably, no matter how much you loved them, dogs demonstrate what it means to die.  Trixie and Scamper were both hit by cars.  Queenie, Grampa’s collie, died of old age.  Jiggs the Boston Terrier died of heat stroke one summer.  You remember the pain of loss, and the story brings it all back.

Only psychopaths don’t feel empathy to some degree.  Think about how you would feel if you were watching Old Yeller and somebody you were watching with started laughing when Travis pulls the trigger on the shotgun.  Now, there’s a Stephen King sort of character.

But I think I can defend having lots of empathy as a reason for crying a river of tears during Disney’s The Hunchback of Notre Dame.  You see, identifying with Quasimodo as the main character, hoping for what he hopes for, feeling like a monster and completely unloved, and fearing what he fears connect you to the story in ways that completely immerses you in the experience.  This is basically a monster movie. 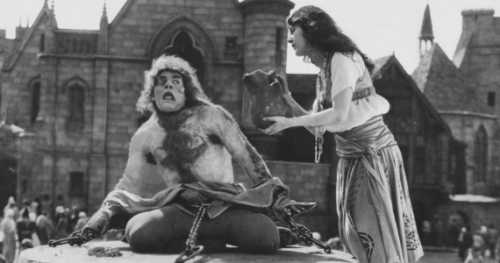 But the film puts you inside the head of the malformed man, and you realize that he is not the monster.  Righteous Judge Frollo and the people who mistreat Quasimodo for his deformity of outward appearance are the real monsters.  If you don’t cry a river of tears because of this story, then you have not learned the essential truth of Quasimodo.  When we judge others harshly, we are really judging ourselves. In order to stop being monstrous, and be truly human, you must look inside the ugliness as Esmeralda does to see the heroic beauty inside others.  Sometimes the ideas themselves are so powerful they make me weep.  That’s when my sister and my wife look at me and shake their heads because tears are shooting out of me like a fountain, raining wetness two or three seats in every direction.  But I believe I am a wiser man, a more resolved man, and ultimately a better man because I was not afraid to let a movie make me cry.

The music also helps to tell the story in ways that move my very soul to tears.  Notice how the heroine walks the opposite way to the rest of the crowd.  As they sing of what they desire, what they ask God to grant, she asks for nothing for herself.  She shows empathy in every verse, asking only for help for others.  And she alone walks to the light from the stained glass window.  She alone is talking to God.

Yes, I am not embarrassed by the fact that movies make me cry.   In fact, I should probably be proud that movies and stories and connections to other people, which they bring me, makes me feel it so deeply I cry.  Maybe I am a sissy and a wimp.  Maybe I deserved to be laughed at all those times for crying during the movie.  But, hey, I’ll take the laughter.  I am not above it.  I am trying to be a humorist after all.