The wall collapsed onto the soft edge of the sleeping nest and Alden leaped to pull Gracie out of harm’s way and over the far side.  It took a moment for Alden to both realize and regret that both he and Gracie were stark naked yet again, and their clothing now buried on the rubble-strewn side of the nest.  Alden was sure he was being punished now for improper thoughts and actions.  After all, Gracie, his wife was just a child in her physical form.

The ruptured surface of the space ship that had plowed through the wall now vomited forth three disoriented and unpleasant lizard-men warriors.

“Look!” said one of the lizard-men.  “Those are Earther children!  We can eat them!”

Alden surveyed the destroyed room.  There was a way out through the door by which they had entered the room hours ago.  There was also a large opening into a room beside and below the nest chamber that had been created by what was obviously a crashing space ship.

“Where did you come from?  What are you doing here?”  Alden asked.

“We need to get out of here, Alden,” said Gracie, trying to pull Alden toward the door.

“Where?  Where did you come from!” shouted Alden.

“We are Senator Tedhkruhz’s elite warriors, here to put an end to the useless machinations of scientists.”

“Yes, we have to put a stop to the stupid efforts to use science to try to change the inevitable outcome of this Great War!” another lizard-man shouted back.

“Do you want your world to end?” Alden asked.

“We don’t want it to end… but since it is ending anyway, we are going to be the ones who end it.”

“That’s a sort of victory, isn’t it?” asked another lizard-man.

“You are insane!” Alden shouted.  “You are destroying yourselves and you don’t need to.”

“You are food for us, and we are starving,” yelled the first lizard-man who now brandished a pair of sharp daggers.

“Please, Alden!  Let’s go!” cried Gracie, trying to pull him towards the door.

Alden pulled back, pulling her towards the hole in the floor.

The doorway crashed open and suddenly a furious Senator Makkhain was standing in the room.

Makkhain turned to the lizard men angrily.  “Get those two Skoog monkeys now!  If they make it out of here alive, I will kill you myself!”

Alden wasn’t sure how he had known where he and Gracie needed to be, but they were now close enough to the hole in the floor to swing down into the darkness below, a couple of naked children… or Skoog monkeys… or whatever the heck they were now.

“Kill them yourself, traitor!” Alden roared.  He pulled his beloved Gracie down through the dark hole in the floor. 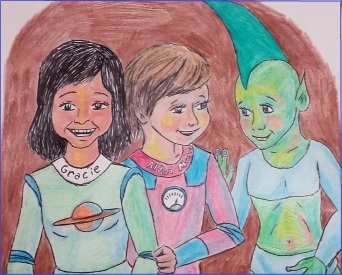 One response to “Stardusters… Canto 62”