Canto Fifty-Four – Aboard the Bonehead

Farbick spent a great deal of effort in the inky darkness talking to Stabharh.  The lizard-man was now the closest thing he had to an actual ally.  Starbright didn’t count as an ally as she had become more of a lover and indispensible resource.  Stabharh told him all about Senator Tedhkruhz’s war on the Galtorrian people and how single-minded ambition had gradually chewed up and destroyed the biosphere of an entire planet.  The Senator had been absolutely remorseless and blood-thirsty, at first because it was highly profitable to the Senator’s backers, and then because it allowed him to eat up his betters and defeat the more powerful, but less ruthless leaders that stood in the way of Tedhkruhz’s rise to planetary domination.

“How do you suppose we can preserve ourselves?” Farbick asked.  “You seem to have a real knack for survival in all these war stories you have told me.”

“Well, I didn’t exaggerate… too much.  Bahbahr and I did survive, didn’t we?”

“Yes,” said Stabharh flatly, “I never figured on out-living that fat greedy slug.  I have no plan for what to do now… though I would really rather not die if I can put it off at all.”

“I think one of the secrets to survival,” offered Farbick, “is relying on others.  Bahbahr obviously owed his survival more to you and your efforts than he did to his own superiority.”

“Yes,” added Starbright, somewhat more helpfully this time around, “and Biznap and I would both be dead already if it hadn’t been for you, Farbick.”  She gave him a loving squeeze around the middle for emphasis.  He hugged her back in the oppressive blackness.

“So, maybe,” said Stabharh, “we need to stand together and help each other instead of treating each other as enemies.”

“Yes.  I like that notion very much.”  Farbick knew that Stabharh could not see him smiling because of the pitch darkness, but for his present purposes he thought that was a very good thing.  He was not planning on turning on Stabharh, but he thought the key here was in working out ways to get others to turn on their own masters… and he was well aware that Stabharh was very unfeeling toward his former employer as he betrayed him and caused that employer’s sad fate.

“We have to convince the members of the Senator’s surviving crew to turn on him for their own good,” said Stabharh.  “They have to see that following that evil lizard-man is choosing their own eventual suffering and death.”

“Why are lizard men so determined to keep doing bad things until they die?” asked Starbright innocently, but again rather unhelpfully.

“We are mostly raised to believe that it is weakness to offer help to others.  If someone is weak, they should die… or be killed and eaten.”

“Do you still believe that?” asked Farbick carefully.

“Well, yes… but I now see that you have made the opposite choice a number of times already, Farbick… and have been quite successful because of it.”

“You could’ve killed Bahbahr and me a number of times instead of doing what you did.  You gave us a chance to live on and make better choices.  Instead of killing me when I was trapped in the force field, you kept me alive until the Senator landed and took us all as his prisoners.”

“At that point, keeping you alive long enough to offer to Senator Tedhkruhz kept him from killing us and eating us immediately.  We helped each other in the long run.”

“I think it will help us even further,” said Stabharh.  “I think I have a plan in my evil little brain that may just get us out of this terrible dark hole.  Wait a minute… thinking this hard hurts sometimes… but… YES!  I know just what to do!”

Farbick bit his lip in the darkness.  This was either going to be a good thing that helped the three of them, or a very bad thing that at least put an end to their troubles.” 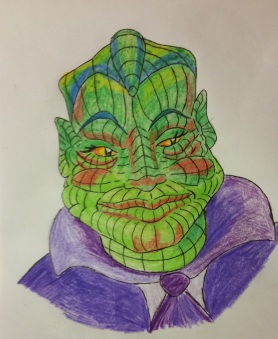 One response to “Stardusters… Canto 54 (A Day Late)”