The Force Awakens (with tornadoes thrown in for excitement)

At long last I got to see it, another thrilling Star Wars movie.  I couldn’t wait for it to reach the dollar movie theater where I could actually afford it, so I saved up my money to take the family to the theater in Valley View Mall off LBJ in Dallas. (This is a doomed and dying mall that no one ever goes to, so the tickets cost only half as much as elsewhere… but it was still necessary to go an hour early to get tickets before it sold out.)  I have seen every single Star Wars movie within the first two weeks of its run, dating back to the original Star Wars which I saw in college at Ames, Iowa in 1977.  And I confess to loving every minute of every one of the movies.  I even like Jar Jar Binks as a character, which gets me kicked out of the Serious Star Wars Aficionado Club for reasons I still don’t understand.

I was predisposed to passionately love this movie.  And I understand why the critics are saying that it is the exact same plot as the first Star Wars movie, Episode IV; A New Hope.   I am not going to review this movie here because I could not do it without those dreadful spoilers that I had to duck for weeks in everything I read about the movie.  Things happen in this movie that directly parallel the first movie, and that means an unexpected death that tore my heart out as much as when Vader kills Obi Wan Kenobi in the original.  Over time, through movies and books and role-playing games, these characters have become real people to me.  I care deeply about what happens to them.  I almost had to care deeply about what happened to us as well. 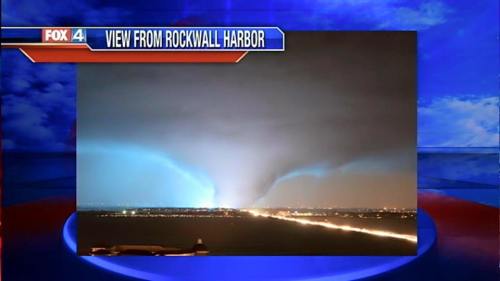 Yesterday was a bad-weather day in Texas.  Tornadoes ripped through the Dallas area  last night.  Eight people were killed as three different funnel clouds touched down and did damage in the area.  As we left the theater and started out for the restaurant where we would get a meal, a tornado warning started ringing on our cell phones and the tornado siren started blaring.  My sister-in-law and her family, visiting from San Antonio, took refuge in the mall we had just left.  They told us that the theaters on the top floor of the mall were evacuated as they sheltered there.  If we hadn’t gone to a matinee, we would’ve been interrupted during the movie.  As it was, we made it to Chili’s Restaurant just ahead of the wind and rain.  We had dinner while the rain poured down, and the Independence Bowl on the restaurant televisions kept getting interrupted by weather coverage like you see above.  We watched the danger zones creep by on three sides of us as we ate burgers and tilapia  in a glassed-in restaurant.  Needless to say, our relatives were unable to join us as they cowered back at Valley View Mall.  The after-movie party and discussion proved to be almost as thrilling an adventure as the movie itself. 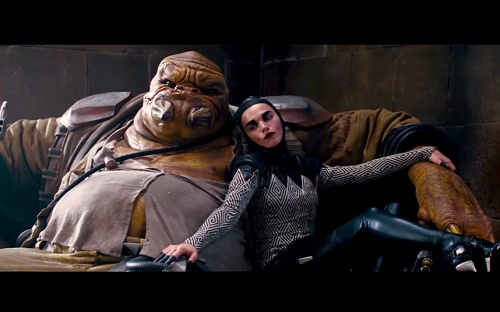 But I simply can’t help myself.  No line or threat of sell-out or adverse weather condition is going to come between me and a Star Wars Movie.  I loved it.  And if I’m still alive when the next one comes out, I’m watching that one too… no matter what.  I love Star Wars!