I have begun work on novel #10 in my Hometown Series about the imaginary little Iowa town where I grew up. This novel is called Fools and Their Toys.  It is basically a novel about how human beans communicate, mind to mind, heart to heart, and mouth to ear.

Now, I should tell you, calling them “human beans” in the previous paragraph was not a spelling mistake. It was the kind of pun that fools like Mickey often employ. And I don’t consider the word “fool” to be an insult. After all, the fool in a Shakespeare play often says the thing that sounds the wisest in the play. And all the world is a stage, and all the people merely players. But I do acknowledge that fools can actually be stupid, too. Their whole purpose is to make you laugh.

Probably the most foolish thing about this novel about fools and foolishness is that the narrator is a zebra sock puppet that the ventriloquist protagonist uses to be able to talk and communicate. Murray Dawes has a condition that makes people think he is slow of mind because he is unable to create speech in his own mouth. He is actually quite brilliant. But that doesn’t come out until he finally has the puppet to do the talking for him. Zearlop, then, is the narrator who puts the entire book in his own words even though he has brains made of wadded newspaper and cotton stuffing.

I have long worried that this particular book would be hard to write. But just like the last three novels it is now flowing out of my word processor as if it is writing itself. I do hope I can hang on to life long enough to make it real.

Tagged as Fools and Their Toys, novel, work in progress

I am setting out to make a web comic that I can post piece by piece on my blog and then build into a graphic novel in my vault.  But that is a harder task than you might realize.  The stories exist in rough draft form, very, very rough, but will have to be re-drawn to turn into something publishable.  Naked cartoons are a problem for me.  Not only do I draw them while I am naked because I have considerable discomfort from moderate plaque psoriasis and sitting in the nude is less painful, but I have a tendency to use naked ideas and even draw naked toons…which all need to be toned down to be publishable.  I do believe that naked is funny… but I don’t hold with naked and crude or naked and gross.  So I am going to rebuild these stories element by element and put some clothes on them.  Unfortunately, I don’t have enough money to buy the equipment I need to draw directly on computer.  I also don’t have any real practice at that.  So, I am stuck with drawing on paper with pen and ink and colored pencil, and then digitizing the result with a camera and photo-shop.  So here are some cartoon elements that I will now start whittling into shape.  I will try to show you my process here as much as it is possible to do. 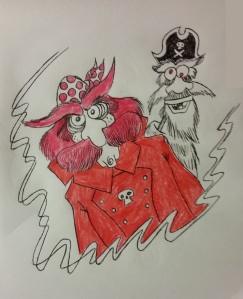 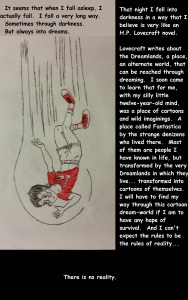 And here’s a bolt; 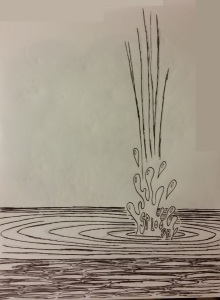 And if you can figure out how it all fits together already, then you are definitely smarter than I am.  I will be busy in the next few days trying to figure out how to insert Tab A into Slot C without giving that phrase any unfortunate double meanings… and I will do my best to keep you posted and show you the results.

You know that setting is a key to good fiction.  It must be as detailed and alive as the main characters.  It is necessary to good art as well.  I will be talking more about that as this Paffooney project unfolds.  I am concentrating on background art.  Here is step one… a tree on a hill.  This is the pen and ink on the original pencil drawing.  It is an extra-warty imaginary tree. 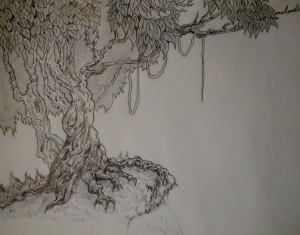 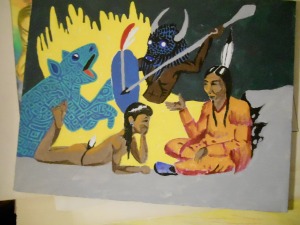 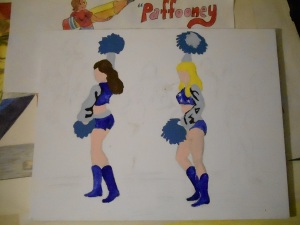 These are a couple of unfinished Acrylic paintings awaiting the opportunity to complete them. One is a pair of Dallas Cowboy Cheerleaders. No mystery about that. I live in the Dallas area, and I’m a male creature with eyes. The other is about a Native American story-teller and the tale he is telling his grandson. It will be mostly about pattern and design when I am finished. I am not fond of the opaque nature of Acrylic paint, so I need to use it differently than I do oil.

I wrote the other day about the fact that my writing is music in my head.  Now, I realize there are probably a number of things wrong with my head, and Lord knows, it may truly need a good cleaning… er, well, not a brainwashing if that’s what you had in mind.  No, what I need is to clarify the meaning of what I said, to restate in a less metaphorical and obscure way.

I have this insane notion that I am a good writer.  Believe me, I am aware of the fact that every Indie author with a self-published novel has the same crazy fantasy right now.  I imagine that my humor is like Mark Twain’s, my characterizations like Charles Dickens (Boz), my themes and insights like William Shakespeare (the Bard), and my creativity akin to that of Walt Disney (Diz).

I plan to write about it in a novel that used to be called The Little Boy Crooner, and now labors on under the title Sing Sad Songs… with Clowns.  Don’t be fooled by the fact that I call this idea-thing a novel.  It is not complete.  There is no flesh on the bare bones.  If it were one of the walking dead, it would not even qualify as a zombie.  It is an animated skeleton.  It is a notion about how words and ideas become and are transmitted by musical means.

The main character is a young boy named Francois Martin, the singing clown-boy in the Paffooney above.  He is orphaned by a terrible car wreck in France, then sent to the only living relatives he has, who happen to live in Norwall, Iowa.  Yes, that same goofy little farm town where I grew up and far too many of my novels are set.  The Norwall Martins own the town tavern, where the bachelor head of the family, Victor (also known as the Vicar), is trying to make a go of it by putting in his bar a new-fangled bar-thing called karaoke.

As you’ve probably guessed, Francois, though he is awkward and unable to communicate in English, is a natural at singing karaoke.  He puts on the clown paint and sings for his supper, and brings people into the bar from all across the State, and eventually the whole Midwest.

The clown images come through his connections to the Dreamlands… the same fantasy world of dreams alluded to in the novels of H.P. Lovecraft.  Three clowns, Mr. Disney (Diz), Mr. Dickens (Boz), and Mr. Shakespeare (the Bard) help the boy and his American cousin Billy travel back and forth to the Dreamlands and learn to understand each other in ways that family members should.   I should warn you, the new title reveals the fact that all dreams are not happy dreams and all endings are not happy endings.  But we shall try… Diz, Boz, the Bard, and I.