Role-Playing Games in the Classroom

Zeus, the god of Storms and the Sky

In the early 90’s a fellow teacher became acutely aware of the effect the role-playing games I was playing at home after school had on the cognitive abilities of the fatherless boys I was constantly entertaining.  She suggested that maybe, if it was working at home with a few students and former students, it could also work in the classroom with all students.

This, of course was a daunting classroom activity to carry out, but enough of a creative challenge to my story telling abilities that I simply had to try.

I began with a cheap RPG book about adventuring D&D style with characters from Greek Myth.  This was an opportunity not only to play adventure games, but to teach a little bit about history and a lot about mythology. 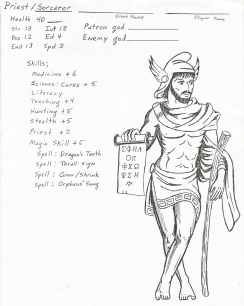 So I created generic character sheets using my own personal copier, my own copy paper, and my own overhead projector plastic overlays.

I created adventures that could be conducted on the overhead with dice and each kid having their own set of skills and useful items.  We conducted Olympic games and included mythological creatures like Tritons and Centaurs as player characters.  We learned about the city of Olympia, the city of Argos, the city of Corinth, Athens, Sparta, and even Atlantis.

I let students draw their character from a hat on strips of paper that contained a boy option and a girl option.  I even let students trade for the character they wanted and we learned negotiating skills along with problem-solving skills.

Demeter, goddess of fertility (which you can’t say in a junior high classroom, so goddess of crops and farming.)

Most of the stories were driven by a kidnapping where the beautiful daughter of one of the players was kidnapped immediately after the Olympic medals were awarded.  The villain would take her to his evil island base, and the players would have to work together to buy or steal a boat.  Gods and goddesses could be called on to intervene, and sometimes they actually did.  Another story line began with the sack of Troy, during which the players either murder or witness the death of a young Trojan boy who just happens to be Heracles’ son.

That story took the players on a quest of penance to visit the underworld and retrieve the boy in the same way that Orpheus tried to rescue his lady love Eurydice.  Potentially, Heracles would even join the quest himself if none of the player characters were the actual killer.  And, of course, all sorts of encounters with monsters would ensue. 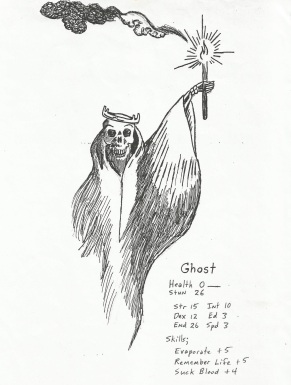 I ended up using about as much of my personal resources as a story-teller and a cartoonist to create those adventures as I had available.  But I had students tell me that the week of classroom time spent playing that problem-solving myth game was one of the most memorable learning experiences they ever had.  I never tried it with a high school class, only middle school, and then mostly with 7th graders.  But I think the experiment was very successful from about 1992 to 2004, and it taught me even more about teaching than it ever taught them about mythology.

Nerds… by any other name!

This is an essay from 2006 that I dug up to make more fun of nerds (which can be considered self-referential humor).

A while back I had the misfortune to write an essay that I called a Bestiary for the Modern Classroom.  I delineated the nonsense as if it were more than the half-disturbed ravings of a burned-out junior-highschool English teacher, something like the wit and wisdom gleaned from a twenty-four year sentence to the educational gulag of our time.  I told you about the Pepsi girls, Snarks, and Invisible Kids.  I deliberately ignored an entire wing of the monkey house by not breaking down for you the tremendously terrible and totally trigonometric totality of the modern Nerd.