Yesterday, before the big game, I watched the DVD I bought of Tim Burton’s Golden Globe Award movie, Big Eyes.  It is the true-story bio-pic of an artist I loved as a kid, Margaret Keane… though I knew her as Walter Keane.

This movie is the bizarre real-life tale of an artist whose art was stolen from her by a man she loved, and supposedly loved her back.  I have to wonder how you deal with a thing like that as an artist?  I live in obscurity as an artist.  My art has been published in several venues, but I have never been paid a dime for it.  All I have ever gotten is publication in return for “exposure”, and limited exposure at that.  But my art always brought vigor, joy, and light to my career as a school teacher.  My art was always my own, and had either my own name on it, or the name Mickey on it.  I shared my drawing skill in ways that directly impacted the lives of other people.  It enriched my “teacher life”. 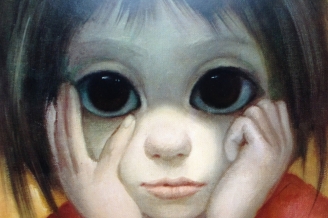 Mrs. Keane’s hauntingly beautiful big-eyed children appealed to the cartoonist in me.  They expressed such deeply-felt character and emotion, that I was obsessed with imitating them.  In fact, the “big-eye-ness” of them can still be detected in some of my work.  I remember wondering how these children, mostly girls, could be drawn by a grown man.  What was his obsession with little girls?  But the true story reveals that he was a man so desperate to have art talent and notoriety that he put his name on his wife’s work, made her paint in secret, and eventually convinced himself that it was actually his.  He had a real genius for marketing art, and he invented many of  the art-market ploys that would later inform the careers of homely artists like Paul Detlafsen and Thomas Kinkaid.  One wonders if Mrs. Keane could’ve ever become famous and popular without him. 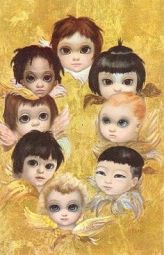 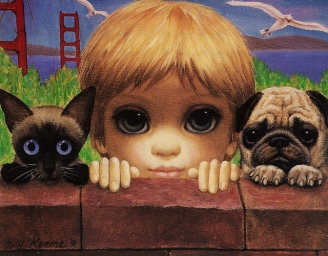 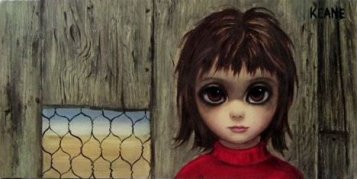 The movie itself is a Tim Burton masterpiece that reveals the artist that lives within the filmmaker himself.  I love Burton’s movies for their visual mastery and artistic atmosphere.  They are all very different in look and feel.  Batman was very dark and Gothic, inventing an entirely new way of seeing Batman that differed remarkably from the 60’s TV series.  Edward Scissorhands was full of muted, pastel colors and gentle humor.  Alice in Wonderland was full of bright colors and oddly distorted fantasy characters.  Dark Shadows was Gothic melodrama in 70’s pop-art style.  This movie was true to the paintings that inspired it and visually saturate it.  It is beautiful and colorful, while also serious and somber.  It makes you contemplate the tears in the eyes of the big-eyed waifs in so many of the pictures.  It is a movie “I love with a love that is more than a love in this kingdom by the sea”… if I may get all obsessive like Edgar Allen Poe. 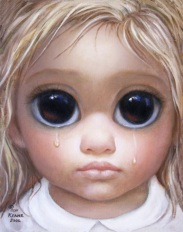 So, there you have it.  Not so much a movie review as an effusion of love and admiration for an artist’s entire life and work.  I am captivated… fascinated… addicted… all the things I always feel about works of great art.