After a long, lonely week by myself, unable to go with my family to Florida for Spring Break due to poor health, my isolation ended suddenly as they returned early.  I woke up to find them already here yesterday morning.  They were tired from travelling, having arrived in the middle of the night, and so they needed to sleep in… and I was suffering horrible cabin fever.  It mattered little, though, that I longed to get out.  I was still ill and unable to breathe outside of my sealed bedroom.  My arthritic back ached and I needed to lie in bed on the heating pad for the better part of a Saturday.  So, what could I do but use my creative talents to take me on a journey into imagination.  I built a castle. 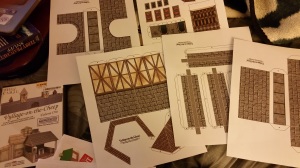 I used an old computer program I previously found at Half-Price Books, the big superstore thing on Northwest Highway in Dallas.  I printed out castle parts on white paper with colored ink.  I gathered pieces of reusable cardboard I had been saving for the purpose.  I began to cut and paste and tape.

I nearly forgot the most important step.  I put on a Dr. Who DVD I snagged at Walmart.   It was An Adventure is Space and Time starring David Bradley (who was playing William Hartnell who was the first Dr. Who, so it was a movie about an actor playing a part in a BBC fantasy series in the 1960’s played by another actor who looked like the original actor… I mean, it was a story about telling a story and it was the true story of the telling… Oh, I give up!  You figure it out.)  (That was the second longest parenthetic expression I have ever written, by the way.)  It also had a full four episode adventure from the very first Dr. Who story, An Unearthly Child, starring the real William Hartnell.  So I watched and cut and taped and pasted and built castle all day. 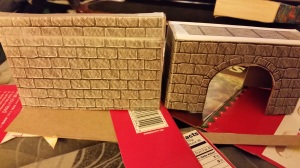 It begins to get exciting as the pieces fit together and it actually starts to look like a castle.  Of course, once it was finished, I had to play with the dang thing.  I am old, and this is my second childhood after all. 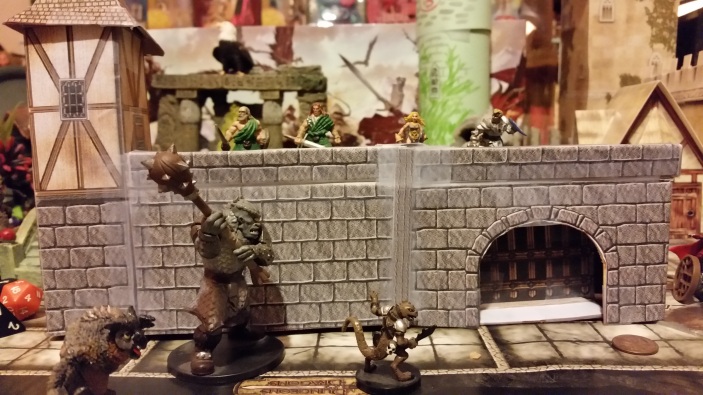 Now, if only I can figure out how to keep female vampires dressed in red from invading my castle.