My first novel-length piece of writing was attempted in college.  I finished it in four years.  It was a pirate tale about a young man, a pirate named Graff the Changeling.  You see him in this illustration I created in 1980 with his two young sons, Rene and Emery.  Because their mother was a fairy, the boys have pointed ears and horns.    It was an attempt at serious fantasy adventure fiction that was so awful, it became a comedy before it was through.  I called it The Graff Tales, and I still have it.  But I promise you, I will never, ever try to publish the horrible thing.  My sisters served as my beta readers for this story.  They both liked the oral stories I told, and they eagerly awaited something like they remembered from our shared childhood.  They both were a bit disappointed by my first prose attempt.  There was a knight called Sir Rosewall in the story.  He was a hapless knighted fool who lived in poverty and swore to reclaim his honor with great deeds, but as he goes to sea as a kidnapped sailor, all he manages to do is fall down a lot and bump his large head frequently.  In the first scene when he enters the story, long about chapter four, he exits a cottage and has to punt a piglet to get out without falling down.  This pig-punting thing was repeated more than once with this character.  My sisters joked that the “pig-in-the-doorway” motif would be my lasting contribution to literature.  Fortunately for me, it was not.  I am probably the only one who even remembers there was such a novel.

But my biggest failing with writing and storytelling was always that I could be too creative.  The story featured a flying pirate ship that was raised from the bottom of the ocean by fairy magic.  The crew were re-animated skeletons.  The gorilla who lived on the island where the ship’s survivors had been marooned would also join the crew.  His name was Hairy Arnold.  One villain was the pirate captain Horner, a man with a silver nose-piece because he had lost his real nose to a cannon shot.  Another was a red-bearded dandy named Captain Dangerous.  But the biggest villain of all was the Heretic, who turned out to be a demon in human guise.  It was all about escaping from pirates who wanted to kill you and hitting soldiers with fish in the fish market.  There were crocodile-headed men and little child-like fairies called Peris that lived in the city where Graff was trapped and transformed into a monster by the Heretic. 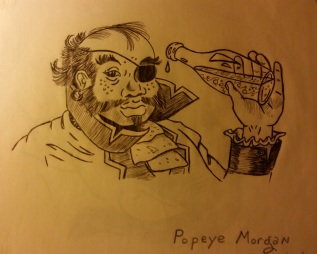 My plot was too convoluted and my characters too wildly diverse and unlikely.  The result was something far too bizarre to be serious fiction.  The only way it could actually be interpreted was as a piece of comedy.  There-in lay the solution to my identity problem as a writer.  I had to stop trying to be serious.  My imagination too often bent the rules of physics and reality.  So I had to stop trying for realism and believability. 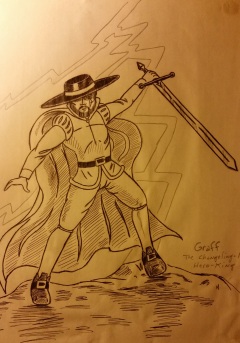 In the end all the main characters die.  All except for young Rene who becomes a pirate hunter.  Of course, I follow Graff and Emery through to heaven because, well, it was a first person narrative and the narrator died.  So, I vowed to myself that I would never let this horrible piece of nonsense see the light of day.  I would never try to publish it, rewrite it, or even tell anyone about it.  And so to this very day I… oopsie.