I spent a good deal of my time as a game master for the Star Wars role-playing game in creating alien characters that fit the movies, the books I read in the Star Wars series, and the game materials.  In this post, I will give you a mini-gallery of the aliens I drew for the game.

Chee Mobok was a space trader who had a problem with his own ego.  He believed that he was a genius at language and could speak any language he had heard a handful of words from.

The Galactic Common speakers were always laughing at the things he said.

Huttese speakers like Jabba the Hutt were always trying to kill him for saying precisely the wrong thing.

Hethiss was the Jedi Master when my son’s Jedi character was still a padawan learner.

He was wise, but unable to keep his student from doing things in violent ways when a diplomatic solution was called for. 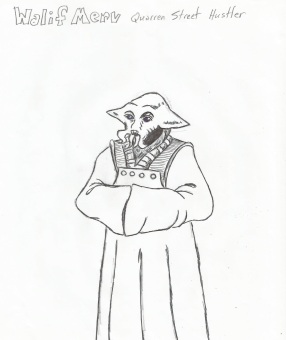 Merv was a potential terrorist and a suspect in a series of murders on a water planet.  He was, however, the good badguy character.  You know, the villain who has a heart of gold and whose actions redeem him in the end…  As opposed to a bad goodguy who seems to be a hero and ends up betraying everyone.

Fisonna was a street kid from the same planet and same race as Hethiss the Jedi master.  He had the potential to become a padawan learner.  But he also used his Force skills to pull pranks on serious adults.

Odo-Ki was a Gotal with the ultra-sensitive cones on his head.  He had a limited ability to see behind walls and predict the near future. 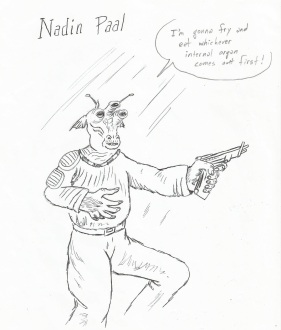 Nadin Paal was an actual pirate and terrorist with no redeeming qualities at all.  The best thing about him was, that when the time came, he blew up really nicely.  A colorful fireball.

Kehlor was a Herglic, one of the whale people who required specially built extra-large space ships and accommodations.   He was also a gifted pilot.  You can see that he wears the uniform of the Trade Authority.

And finally, Klis Joo was a Duro and a Jedi, a gray alien with considerable Force powers.

There were many more drawings like this as well.  But these are some of the best ones.