Getting Back to the Writing in my Heart

I successfully prepared for the possible death of my beloved laptop, and that foresight managed to save a lot of the art and written work that was stored there.  What is lost to me because I ran out of time to back everything up is not beyond my ability to retrieve it.  I not only backed up files on thumb drives in triplicate, I managed to send copies of my completed manuscripts to both of my sisters as well as my oldest son.  I have been almost paranoid about preserving my creations.

And the reason for that is not because of the onset of mental illness, or obsessive compulsive disorder, although those are probably both factors, but because the most valuable possession I have acquired in my life is the story I have to tell.

The novel I am working on now is going to be the most powerful and complex that I have yet done.  I am confident that it will also be the best I have done.  I wrote what I believe are good novels before this one. I like to think that if people bother to actually read Catch a Falling Star, Snow Babies, The Bicycle-Wheel Genius, and The Baby Werewolf, they will think so too.  Editors have told me that my work is as good or better than some of the good books published by Random House and Penguin Books, and they know from having worked for those publishing houses.  And I waited to write this one because Sing Sad Songs is so good that I had to learn the skills necessary to write it before I tried to get the story down on paper.

Francois the singing boy is based on a real-life student whom I loved and taught and eventually lost tragically.  His talent changed the world for me, even if it didn’t last long enough to change the worlds of so many more people that he could’ve touched had he lived even a little longer.  And I am the only person who can possibly tell this important story.

I made myself cry for ten minutes by writing that last paragraph.  But don’t be sad for me.  Remember, I am a humorist.  I take the tragedies I have known and try to weave it into stuff that makes you laugh twice as much as it makes you cry.  You know, that stuff we loosely refer to as comedy.  And that’s what this story is about, laughing at everything in life except for those few things that make you have to cry.  Writing is about expressing feelings and describing how conflict is navigated in order to find the love or the love lost on the other side of conflict that is what the world is really about. 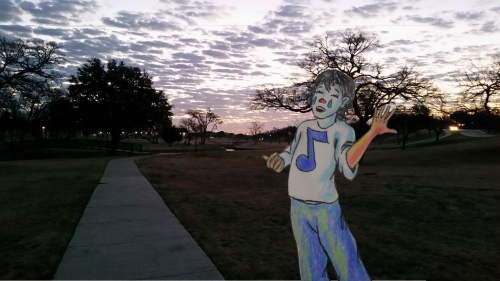 I know this all sounds like hyperbole… bragging even.  I probably will never pull off the actual creation of the monster, certainly not without consequences, torches and pitchforks, and such…  But it is the reason for all the labor, the back-up plans and paranoia, and the notion that I just might’ve reached the level of skill necessary to bring it all to life.

And I am writing again.  Not even the death of a computer has been able to stop me.

3 responses to “Getting Back to the Writing in my Heart”