How Mickey Battles the Blues 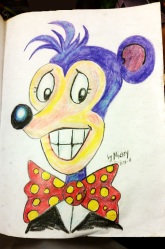 It should be noted that Mickey does not battle the St. Louis Blues.  That is his favorite hockey team.  And while they have never won the Stanley Cup, they do win a lot and are almost always in the playoffs.  So they help fight depression.  Battling them would not only be counter-productive, but might also result in losing all those big square white middle teeth in that goofy smile.

But battling depression is a constant necessity.  Not only am I subject to diabetic depression and Donald Trump overload, but my entire family is prone to deep and deadly bad blue funks.  It helps to be aware that there are a lot of ways to fight that old swamp of sadness. It doesn’t have to keep claiming the Atreyu’s horse of your soul.  (Yes, I know that Neverending Story metaphors seriously date me to the 80’s and signify that I am indeed old… another reason I have to constantly fight depression.)

I have some surefire methods for battling depression that apparently the science actually backs up.  It turns out that most of things that Mickey does actually stimulate the brain to produce more dopamine.

“Dopamine is a neurotransmitter that helps control the brain’s reward and pleasure centers. Dopamine also helps regulate movement and emotional response, and it enables us not only to see rewards, but to take action to move toward them.”  – Psychology Today

So, I guess I am secretly a dopamine addict.  It is a brain chemical you cannot focus or function effectively without.

8. And please, don’t forget food.  Depressed eating can easily make you fat, but there are certain magical chemicals in certain foods that give you certain dopamine-building effects that can turn blue skies to bright sunshine.  The primary chemical is called Tyrosine, and it can be found in a variety of foods like;

9.  And finally, thinking skills are critical.  While thinking too much and obsessing can get you into the tiger trap pits of depression, meditation, decompressive mantras and positive thinking can all dig you out and keep you out.

You are probably wondering what kind of nitwit authority I can actually bring to this topic, but I have spent a lot of money on therapy, not all of it for me, and I not only listen to psychiatrists and psychologists, but I remember what they explained to me.  And I have tried enough things to know what works.

So while you are busy chicken dancing to Beethoven while eating a banana, rest assured, Mickey is probably doing something just as embarrassingly ridiculous at the very same time.