But no conspiracy theory worries me more at the moment than one about the existence of German ninjas who advance the neo-Nazi agenda by the use of the secret martial art of der Ententanz.  That’s right, they do violence to opponents (and possibly themselves) by aggressively doing the Chicken Dance.

You really have to watch the video above to truly appreciate the perfidy of Ententanz Fu.  Notice how it starts with the pinching-fingers castanet attack, useful for grabbing the opponent’s nose or other sensitive protruding appendage.  It is followed by the flapping elbows move that can stun the enemy by its sheer ridiculous flappiness.  And then the bouncing butt attack, which can potentially paralyze the adversary by bouncing them around the room.  All of this is followed by the dancing in a circle maneuver which renders the viewer unconscious with insane levels of laughter.  Yes, the aggressive use of the chicken dance can literally make you laugh yourself to death. 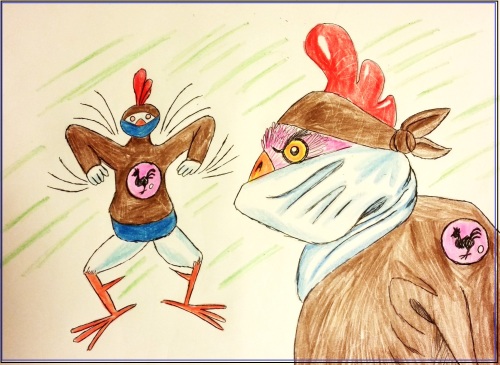 Now, if you truly believe I am not totally serious about the dangers of ninjas doing the chicken dance in order to assassinate ordinary tax-paying citizens, I should warn you…

I mean, most people think of Ententanz Fu as merely another way German-themed tourist traps like the ones in Fredricksburg, Texas make relentless fun and ridicule targets out of clueless white people during Oktoberfest, but in reality…  Yes, it is that, but it can be so much more.  Take it from somebody who narrowly escaped from a chicken-dance-induced coma fairly recently, it is possible not only to die laughing from this dancing-poultry scourge, or be embarrassed to death, but you can also accidentally tie yourself up into a German pretzel… at which point, chickens will dip you in mustard and eat you.

So be warned.  This is a danger not even Alex Jones on InfoWars has warned you about.  (Though, if you give him enough time alone with hammers to hit himself in the head with, he may come to the same conclusions soon enough.)