One of the most fascinating things about Dungeons and Dragons, the story-telling adventure game with sword battles controlled by dice rolls, is the characters.  They are a creation by committee.  You take a blank character sheet, roll six basic numbers by complex rules on dice, and then decide who that character is; paladin, rogue, magician, archer, swordsman, etc… what that character is; human, elf, dwarf, hobbit… I mean halfling, orc, gnome, or Minotaur… and then do the complicated math that those choices entail.  But then you have to do the real work and give that character life in the form of hopes and dreams, likes and dislikes, personality quirks, and goals.  They have to become collaborative characters for a play that won’t actually be written until the players perform it. 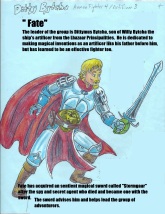 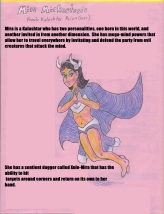 These, you may recall if you are nutty enough to read Mickian regular features, are my children’s player characters. 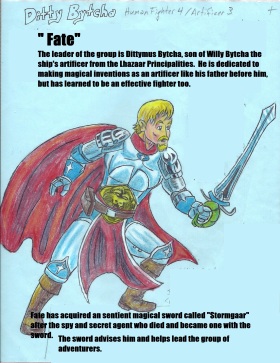 Ditty Bytcha who prefers to be called Fate is my number one son’s original character.  He is a fighter wearing magic armor who loves to make things as an artificer (one who builds devices with magic).  He eventually wants to cut his own arms off and replace them with mechanical ones.  He is also quick to leap into the fray and is fairly deadly with his chosen weapons.  He once made a crossbow that had explosive power enough to blast apart a ship and kill everyone on board, including the people he was trying to save.  He is also a good leader and is always ready with a joke that can even make the Dungeon Master laugh.

And number two son’s character, Gandy Rumspot, is a food-loving halfling that also likes making ships.  No kidding, he likes being a shipwright and designing sailing vessels… and flying airships powered by captured air and fire elementals.  He likes riding pteradactyl-back and firing crossbows at the evil enemies from the air.  And he is good at making fun of other characters, even to the point of making some of them angry to the point of tantrums… especially his sister’s character.

And, of course, my daughter the Princess’s character, Mira Mirkestasia is a telekinetic Kalashtar who floats everywhere instead of walking.  She possesses an intelligent throwing knife that not only comes back to her hand after every throw, but seriously wants to kill Gandy for his sister-jokes.  She protects the whole group from those like the evil Dr. Zorgo who threaten to take over your mind and put your brain inside a stone golem.

And, of course, three people is probably not enough to actually survive in magic-rich and dragon-filled Eberron.  So additional characters are required to go on and actually survive dungeon-crawling adventures.  These are known as NPC’s, Non-Player Characters.  I will tell you more about them in another post, but here are the two most important ones; 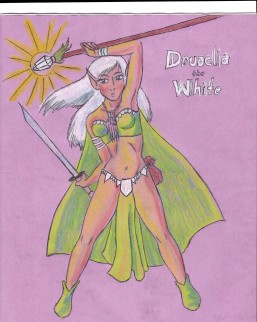 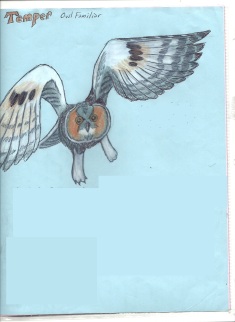 Druaelia is a female wizard whose familiar is the owl Temper.  She was there for the very first level-one adventure killing rats and gnolls who were particularly weak and stupid.  She started as a magic user looking to be the fireball expert.  But her fire magic kept going astray (rolling a 2 or a 1 on a 20-sided dice is catastrophic failure and not a good thing to roll when fire is involved).  And she eventually learned she was much better with ice and snow magic.  She is naturally immune to cold and can wear bikinis in winter, a useful thing when more than half of your team is made up of adolescent boys.

Elytharra, more commonly referred to as El, is the cleric and healer of the group.  She is much more modest and devout, being a worshipper of the blue dragon Aureon, god of wisdom and magical knowledge.  She is the one charged with learning how to heal boo-boos (and re-attach heads and raise the dead) because hunting for treasure in dragon caves is a dangerous business and dice rolls can make really bad things happen.  She was also part of the very first adventure, and the rats almost ate her.

So the main reason we have enjoyed D&D adventures so much is the fact that the characters are so surprisingly real.  We learn to care deeply what happens to them, and want them to prosper in the face of evil, no matter what comes.  And the real secret behind them is… in truth they are really us.