“The party now rushes through the front gate of Castle Evernight.  Gandy swings down from the room where he operated the pulleys that opened the drawbridge and barbican doors to rejoin his fellow fighters.”

Princess Mira the Kalashtar- “Do we see any more golems or other fighters to stop us?”

“You do not.  Since you took away Dr. Zorgo’s wand of golem control and Zorgo himself died in the plunge from the tower, there no longer seems to be anyone to keep you out of the castle.”

Gandy the hafling rogue- “Then the castle is now ours!”

“Perhaps the Duke’s daughter would dispute that.”

“Sien, I’m sorry.  But the Duke and all his servants are now dead.  We liberated the castle and have a right to claim it.”

“Sien Evernight looks at you sadly.  She says, “I do not dispute your right to the castle.  But my father, remember, had been changed into a gold  golem.  And even though he grabbed Dr. Zorgo and pulled him over the tower’s rail, he may have survived the fall.  Of course, that doesn’t make him actually alive.  But with no one controlling him, we may be able to talk to him once again.  You can have the castle for all I care, but I want to know what my father thinks.” …and I think you need to be reminded by the DM that your leader committed to replacing the Duke and ruling the city. “

Yes, I have been playing Dungeons and Dragons with my own kids, and the pencil and paper characters we use for the silly story-telling game have become, over time, real people to us.  But the game has slowed way down since number one son left to be a Marine and number two son got a weekend part-time job.

So, the conquest of Castle Evernight might end up being the last adventure actually conducted around the D & D table in the upstairs library.

So I created a Facebook page for the family game and intend to post stuff on there that may keep the game at least a little bit alive outside my own stupid head.

I intend to post stuff there to update everyone on what is happening in Eberron to the members of the ongoing quest.

Just as a reminder, I will show you the player characters again;

Number one son’s character is retiring to be the new Duke of Evernight, married to Duchess Sien Evernight.

My daughter, the Princess’s character is Mira the Kalashtar. 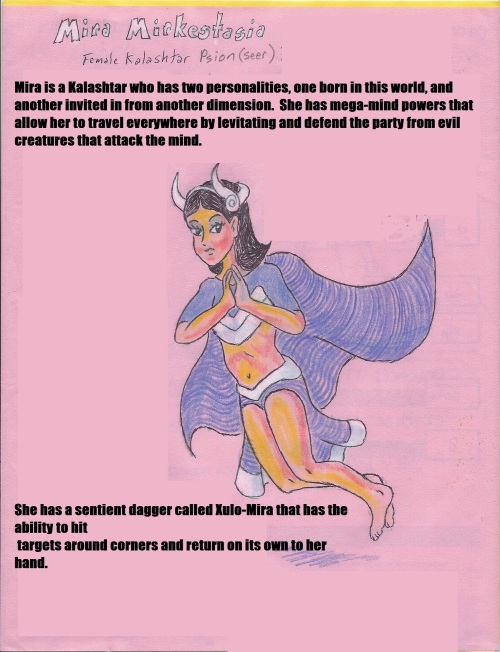 My intention is to use Saturdays, the traditional game night, to post more D&D stuff to this page and the Facebook page.  I need more creative ideas to keep filling this blog daily, and I have done considerable work setting up the game as Dungeon Master.  I don’t want it all to go to waste.  You will be welcome to come anytime and take a look.  But I am just too immature and set in my ways to totally give up D&D.