The BFG (a review by the Uncritical Critic)

I was predisposed to like this movie from the outset.  After all…  Spielbergh… Roald Dahl… a musical score by John Williams… almost Robin Williams as the BFG!  But I don’t like this movie after all.  I LOVE it!!!

I am easily stunned by gorgeous settings, CGI magic, and artistically done visuals.  I am easily captivated by cute and gifted young actresses like the one who plays Sophie, Ruby Barnhill.  And I am especially won over by the smiling face of the BFG himself.  He reminds me so clearly of my Great Grandpa Raymond (who was no less a magical being in my life than the BFG is in Sophie’s).

The fact that the BFG’s job in Giant Land is the capturing, bottling, mixing, and gifting of dreams is the most winning feature of all.  And he uses it in the epic plan to overcome the bestial, cannibalistic, (and possibly Trump supporters) other, bigger giants.  He is a metaphor for the story-teller himself… enduring hardships and harrowing adventures to capture, package, and deliver the stories that are so important to life and people’s ultimate happiness.  It is true for Roald Dahl, the darkly silly genius who wrote the story.  It is also true for Steven Spielberg, the craft-master and movie-maker who put it on film.  It is true also for the magician of movie music, John Williams.  I hope, someday, it will also be true for me. 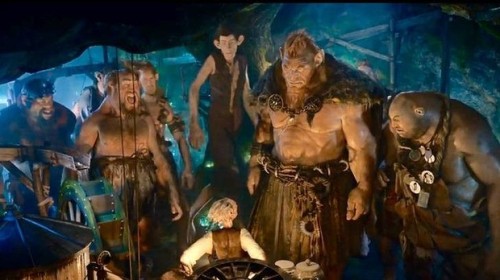 So many things about this movie are the epitome of the best movie-theater experiences.  I do not understand how it could’ve done so poorly in the box office.  I believe it will become one of those beloved and much-watched DVDs like Spielberg’s previous fairy-tale masterpiece, Hook, did.  I pray that it won’t simply become an overlooked asterisk in the history of cinema.  It is too good of a movie experience for that.

2 responses to “The BFG (a review by the Uncritical Critic)”