I have had a practically life-long fascination with trains.  Where did that come from?  It came from a Methodist minister who once upon a time saved my life.

Reverend Louis Aiken (in the cowboy hat) was a lover of HO model trains, as well as country music… and, of course, God.

My best friend growing up was a PK, a preacher’s kid.  And as we hung out and played games and got into imaginatively horrible trouble, we invariably wound up in the basement of the parsonage where his father kept his HO train layout.   I learned lessons of life in that basement in more than one way.  I have to explain all of that somewhere down line.  But for now, I have to limit the topic to what I learned about trains.  They are a link to our past.  They are everywhere. And they do far more for us than merely make us cuss while sitting and endlessly waiting at the railroad crossing.

When visiting Dows, we absolutely had to stop and take pictures at the train station. 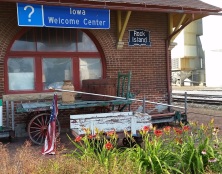 This is, by my best guess, an SD40 locomotive parked at the restored train station in Dows, Iowa.

Spotting trains to take pictures of, gawk at, and totally make cow-eyes over has become a way of life to me.  When visiting Iowa, especially Mason City, Iowa, we always have to stop at the engine on display in East Park.

When I was a kid, this old iron horse was not fenced in to protect it from kids, weather, and other destructive forces.  Now, however, it is fully restored and given its own roof.  This is a 2-8-2 steam engine with two little wheels in front, eight big wheels in the middle, and two little wheels at the back (not counting wheels on the coal tender).  I have ridden on trains pulled by such a behemoth.  I love to watch the monkey gears grind on the sides of the wheels forcing steam power into the surge down the tracks.  And I can’t help being a total train nut.  Of course I don’t deny being more than one kind of nut.  But being a mixed nut is another post for another day.