There are so many places in this world (or maybe out of this world) to visit and become a part of, that it really helps to have a map to navigate the places (especially imaginary places) with the mind’s blurry eye. 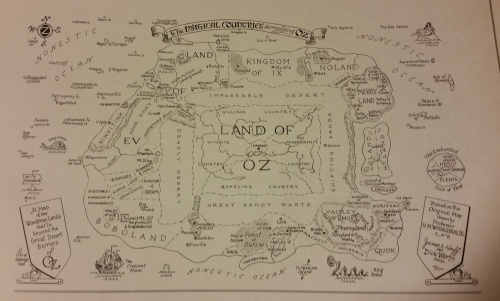 If you are ever lifted up into the stratosphere in your house by a twister, bonked on the head so you see wicked witches flying on brooms, and set down in a place filled with magical dwarfs called Munchkins… the above map might prove very useful.  I found it’s like as a kid to be thoroughly helpful as I read not only Frank L. Baum’s first book, but also his second and fifth books.  It really helps to know where you are in Oz. 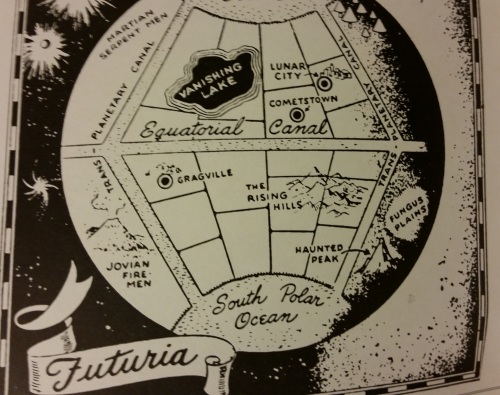 Edmond Hamilton’s hero, Captain Future, needed a map of worlds like Futuria as well as Mars, the Moon, and Venus in his 1940’s Science Fiction Adventures from Captain Future Magazine.

This is Fritz Lieber’s city of Lankhmar where giant Fafhrd and the Gray Mouser commit numerous acts of stealing, wenching, fighting and drinking.  A map like this would help them in their many dealings with wizards, magicians, and strange beings.

This map could easily prove to be the salvation of Robert E. Howard’s hero, Conan the Barbarian.  The well-traveled Conan was a peerless fighter, but not much of a thinker.  So barring the odd smart girlfriend and witty, fast-talking sidekick, Conan couldn’t do without it.

This whole map thing was inspired by this old book that I have thumbed through so much the pages are falling out.  It contains maps of Middle Earth, Pern, Pellucidar, Atlantis, the planet Arrakis from Dune, and Narnia.

It is now the inspiration for my holiday art project.  I will create my own imaginary map from my hometown novels, a map of Norwall, Iowa, that will include the homes of many characters, fairy battlefields and secret lairs, the Gingerbread House where the witch lives, and more.  As you can see… I have only just begun.

4 responses to “Gosh I Love Maps!”