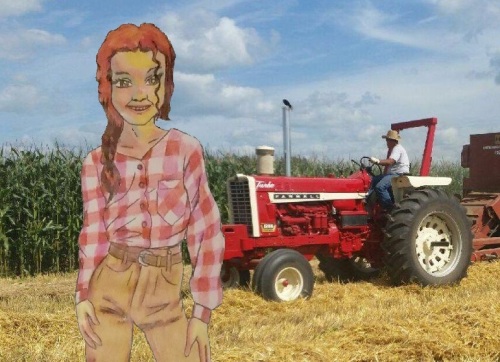 Farmgirl is adapted from a picture borrowed from the Belmond Area Arts Council.

I was born in Mason City, Iowa (the original River City of Meredith Wilson’s Broadway musical, the Music Man).  But my parents didn’t hold with no big-city Ioway sort of life, so we eventually moved to my mother’s home town, Rowan, Iowa.  It was roughly about 275 people (if you count the squirrels… which a lot of the townsfolk were… qualified squirrels).  My two maternal uncles and my grand parents were busy maintaining the family farm there, and though I lived in town because Dad was an accountant for a seed corn company instead of the farmer he grew up as… I got more than my fair share of farming-type opportunity.  You know the stuff… shoveling pig poo… cow poo too…   I got to help feed the chickens (and get chased by roosters, and get pecked by hens when we checked their nests for eggs, and watch the rooster rodeos as revenge for all the chasings… because roosters don’t lay eggs and the only thing they are really good for in an egg farming setting is lopping their heads off, and watching them flop around like rodeo bulls with no heads for fifteen minutes until they finally figured out they were dead, then plucking ’em and watching Grandma Aldrich cook ’em).  I got to drive a tractor, although they didn’t trust me to do more than the simplest of tractor-driving jobs like pulling the hay rake.  I got to shovel chicken poo out of the hen house and out of the brooder house.  (Notice how a lot of the world of the lowly farm boy centers somehow on poo?)  It was a rustic rural life reminiscent of Norman Rockwell… although he depicted mostly town life and not as much of the fields and animal pens (and poo) that are central to Iowegian farm culture. 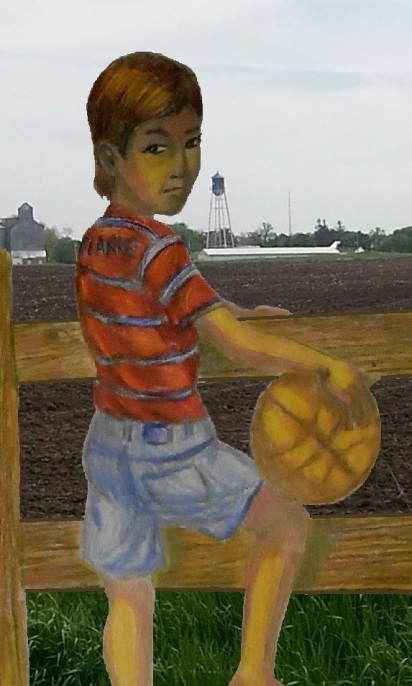 Brent Clarke is a me character in my stories… but also one of my farm boy friends.

Growing up a farm boy has a few advantages to go along with the many drawbacks.  First off, you learn young where babies come from.  Piglets and calves and puppies and kittens are not born in secret.  And it doesn’t take much spying out on farm life to learn how those baby animals are made either.  There is ample opportunity to learn what you are not supposed to learn at a young age from farm girls too… but we were gentlemen… and extremely embarrassed by the fact that baby people are made in the same grisly, awful way that baby animals are out in the barn.

You also learn to be somewhat self-sufficient.  I learned how to tend a garden.  I learned how to fix a flat.  I learned how to repair a roof and build a rabbit pen.  Hammer, pliers, screwdriver, saw… I learned to use them all and make stuff.  Crude stuff, sure… smashed-finger-with-hammer-stuff too.  I made a bookshelf in shop class that had a bit of Michael blood built into it.  But I learned things that boys should know, and really don’t any more.

So, I guess I am claiming that because I am an Iowa boy… a farm boy… and despite my many short-comings and short-changings my life has been good and worthwhile… being a farm boy is good.  And one of the greatest shames of the modern world is this… there just aren’t many farm boys any more.