Have No Fear, Mickey is Here

I have recently had more run-ins with my old nemesis… Fear.  He is a vicious animal that makes my heart race and muddles my thinking (which is ironically very hard to do considering the muddlesome nature of my brain to begin with.)

I posted a political post a couple of days ago suggesting you should shoot yourself in the foot.  Fear tells me he likes shooting.  He is a card-carrying member of the NRA.  Second Amendment rights are more important to him than the First Amendment, the Fourth, the Sixth, and definitely the 15th.  He agrees with Donald Trump about Mexicans.  We have to seal the border, and if they come across to commit crimes, steal our stuff, and mess up our lovely whitebread world, we oughtta be able to shoot them.  Fear likes conservatives in politics.  He knows they don’t really mean it when they ask us to give up stuff and give them more money in return for protecting us from all those scary “other people”, but he likes the notion of guns and military to “protect us”.  Those “other people”, they are scary. and icky, and awful.  We hate them.  Let’s kill them.  Fear really does say this to me, and I am fairly sure that he says it to other people too.  But I have decided I don’t really want to listen.

In fact, I want to stand up to him.  I am tired of listening to people whom I care about repeat fear-fueled talking points from Fox News about why white cops who killed black youths without giving them their right to a trial… especially un-armed black youths… were probably justified and were rightfully afraid for their own gun-fortified life.  I was mortified when the white cop in McKinney, Texas threw the black girl in the bikini to the ground and put a knee on her back.  That was a girl like so many of the ones I have taught in Texas.  Sure, she may have said bad words to him… because she was afraid.  But she had more reason to be afraid than he did.  So, I need to use Mickian magical powers to punch Fear in the nose.  This monster will not beat me, even though I am naked and unarmed.  I am not afraid. 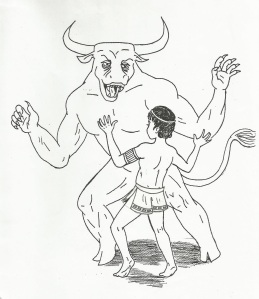 And here’s the reason why…  I love people.  I don’t hate them.  I don’t fear them.  I particularly love some of the people that friends and relatives routinely tell me that they fear.  I have had black, Hispanic, and Muslim students that I would die to protect without hesitation.  When I stood between a Hispanic boy with a sharp metal throwing star with which he intended to commit a murder, and the boy inside my classroom he was threatening, I was ready to die.  He was not entering my classroom while I lived to block the doorway.  Fortunately for my stupid, brave self, an even braver History teacher prevented him from getting to me and got him to drop the weapon and run away.  Later that day I cried several gallons of tears and thanked God I did not wet my pants on the spot, but that is not the only time in my teaching career that I stepped between two combatants in order to protect them both and end the fight.  The secret to those victories was never having a gun or weapon to fight back with.  All I had to do to win the battle was overcome Fear… to beat him down and not let him be a factor.  You can always talk your way out of any terrible situation.  If the person you are talking to knows you are not showing fear, and you bother to tell him or her that you care about not letting them get hurt, even by their own actions… even the most wicked-hearted people are still people and still have a heart.  If they don’t, a gun isn’t going to save you anyway.  It would’ve helped Ninja-star-boy to have someone supply him with a gun.  So I say this without fear.  “Fear, you do not have a say in my life!  I do not give you any power over my faith, my politics, my daily life, or my loves.”

Now, I am not made of bricks or steel, and I am definitely not bullet-proof.  But I am not afraid to say, I am a liberal in my politics.  I believe in helping people, not hurting them in the name of Fear.  And so, if you Klansmen and white supremacists are offended by that fact and believe you need to punish me for my commie-liberal-sinner crimes, I am ready to tell you that I respect you as a human being, and disrespect every hurtful thing you stand for.  I will gladly give you your Fourth and Sixth Amendment rights, and do everything in my power to prevent you from exercising your Second Amendment rights on my poor little (Biblical-word-for-Donkey used as a euphemism).

Oh, and I am not about to tell you where I live.  I may be stupid and brave, but nobody is that stupid.