The Iowa Landscape in late, late afternoon… or possibly evening.

We made it to Iowa.  But only after a long, hard, impossibly-icky travel day.  More than 700 miles were covered in only fifteen-plus hours.  With no real breaks for meals because restaurants will not look kindly on bringing the family dog into the dining room.  Especially our dog, who will kill for people food, and even threaten small children if she thinks they might pull her ears and also look tasty enough.  Traveling with an insane dog is never easy.

And the way was unusually challenging.  We normally travel up Interstate 35 because it goes from the North Dallas suburbs where we live to within a few miles of the family farm where my parents still live.   It is a good route because it is very travel-friendly with numerous places to stop and a 70-plus miles per hour speed limit to make the trip faster.

But first, we had to pass through Oklahoma.  And unfortunately that means Okie drivers.  Especially the super-speed Bubba trucks (Chevy pickups with a rebel flag in the back window and more often red than any other saner vehicle color), ultra-super-speed oil-money Wasp-rockets (BMW’s, Rolls Royces, Italian sports  cars of high-dollar varieties),  and the most dangerous, the Oklahoma Highway Patrol (because I have a Texas license plate, that is.  They never seem to be a problem for the first two groups on this list.  Do other people in the world do racial profiling against Texans in general?  They probably should.)

And, apparently every bridge, over-pass, and under-pass on Interstate 35 has to be repaired, inducing a lowered speed limit that also apparently doesn’t apply to Okie drivers.  And the powers that decide things for highways went with the northbound lanes first so they could save the southbound  side for my eventual return trip.  I got honked at, headlight flashed at, and endured several Okie drivers using one of their fingers to brag at me about their current I.Q. (I won’t mention which single finger they all use for that).  They heaped this scorn on me for daring to go no faster than the posted speed limit.  I mean, there are road signs in Oklahoma that tell you it is against the law not read and obey all road signs.  And fines are doubled, if not quadrupled, in work zones.  But the laws against not reading probably don’t apply to those who naturally can’t read.

And I ran into trouble with Kansas City rush hour.  Which, of course, travels in the opposite of a rush.  And while we were sitting and waiting in the middle of the rush, my little car’s engine overheated.  So I had to turn the heater on high and aim the dashboard vents out the rolled-down windows to prevent the car’s engine control chip from shutting the engine off to cool down in the middle of the stationary rush.  The heat made the dog even more insane.

And when we finally got to Iowa just before dark, we may have been kidnapped by aliens.  Time, it seems, completely went missing  in southern Iowa, making the trip last even longer.  I may actually have captured the reason for that.  I took a few pictures with my phone camera on top of the steering wheel, which probably isn’t a safe thing to do, but I wasn’t in Oklahoma at the time.  So decide for yourself if this is significant, or just marsh gas. 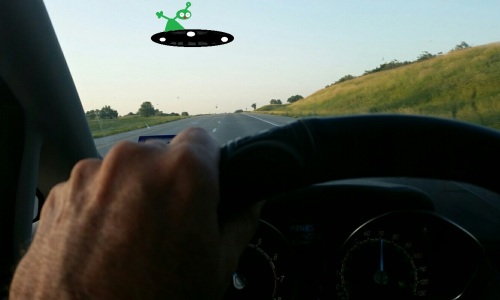