Cleaning in the library led me to rediscover an old project.  Roy Rogers and Trigger had been sitting next to the TV in the library.  I found them both on the floor between the TV and a book stack.  Time to pick them up and put them back in shape.

The doll is a random military action figure rescued naked from a thrift store.  I thought the face looked enough like Roy Rogers to turn him into that particular hero.  The horse is from Mattel, and probably is part of a Barbie play-set. It was given to me by a relative.  I dressed Roy in a Lone Ranger Captain Action uniform with a Tonto gun belt, both created by Playing Mantis Toy Company in the late 1990’s.  The hat is actually from a Cowgirl Barbie because I wanted a Roy Rogers-style almost-white hat.  The Lone Ranger hat is too flat-brimmed to look right and way too large to fit on Roy’s smaller head, and the only other cowboy hat I have for it is a Johnny West hat from Marx Toys in the 1960’s, and that is dark brown.

Everything Johnny West that I still have was salvaged from the house where I grew up back in the 1980’s.  They belonged to my little brother, but ended up in my collection because he outgrew dolls and action figures long before I did.  I wish I still had the doll himself, but I think Dabney blew him up with a firecracker when he was a teenager. 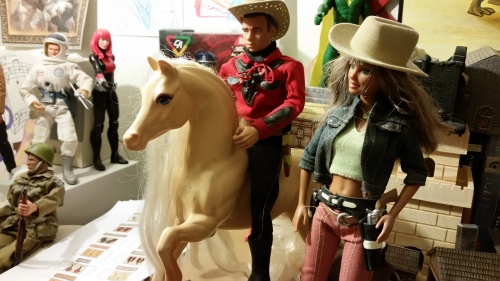 So, I have to be happy with only having Roy and Cowgirl Barbie to play with.