The Clock on the Wall 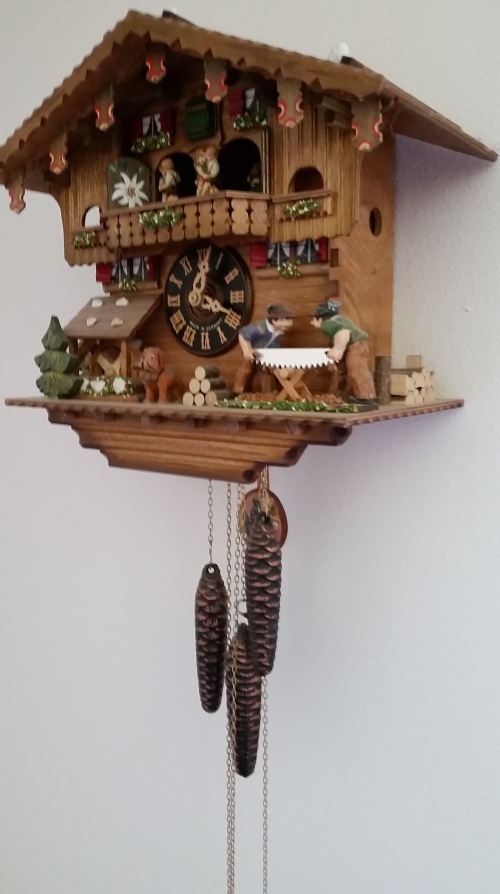 Who in their right mind writes an essay about a clock on the wall?  Well, the “right mind” thing gives me an out.  I do watch the clock on the wall.  Especially now that I am old, and the sand in the hour glass is running out.  The clock on the wall can be quite entertaining.  Especially one like the cuckoo clock that hangs in my parents’ front entryway.  On the hour, the dancers twirl and the two goofballs in lederhosen saw away at the log they will never be able to cut in two.

My wife and I gave that clock to my parents as a gift for their 50th wedding anniversary.  We bought it in Texas and brought it on a visit back to the family farm in Iowa.  Having old German relatives as a boy, I remember waiting impatiently for the clock to strike in Great Aunt Selma’s house, anxious to see the cuckoo pop out  and the clockwork entertainment do its little mechanical show.  I’d have gladly wished on a star for the hours to pass instantly… to see the show again right away… and be older and wiser and able to do more.  Back then it seemed like older folks like Aunt Selma lived forever, with her dried-apple face and German accent.  Accumulated time seemed to have majesty and power.  It was magical. 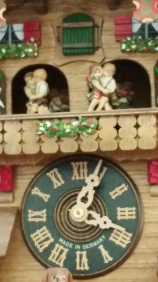 But now I am old.  My joints hurt every time I move.  I can’t get out of bed of a morning easily.  Parts of me that I used to take for granted no longer work.  I have forgotten what it feels like to feel good and full of energy.  The time on the face of this old clock hasn’t changed in nearly a decade.  My parents don’t keep it wound.  We no longer look forward to the clock-Kinder dancing so often.  If the clock stays forever at five after four, maybe the grim reaper won’t come knock at the door.

I have always believed that there was magic in old cuckoo clocks.  It was a simple, earnest faith in magic that only a child can truly know.  But now, as an old man, I remember.