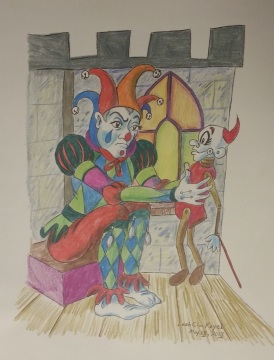 It is an unusual position to be in as a kid in the school room to be the creative kid.  First and foremost because you will forever be known as the weirdo, the spaceman, the egghead.

If there was a problem to be solved, a picture to be drawn, a group assignment that required somebody to actually think, I was the kid that everybody wanted to be in their group or be their partner.  (That time that Reggie and I blew up the test tube of copper sulfate in Mr. Wilson’s chemistry lab doesn’t count because, although I am the one who dropped it, he’s the one who heated up my fingers with the blowtorch.  Honest, Mr. Wilson, it is true.) But if it was picking teams on the playground, I was the last loser to be called, even though I was pretty good at softball, pretty good at dodgeball, great at volleyball, and usually the leading scorer in soccer (of course we are talking an Iowa schoolyard in the 60’s where soccer was a sport from Mars.)  And as an adult, I enjoyed teaching the creative kids more than the rest because I actually understood them when they explained what they were doing and why, and I was even able to laugh at their knit-witty jokes (yes, I am including those jokes made of yarn with that pun).   Creative kids speak a language from another world.  If you are creative too, you already know that.  And if you aren’t creative… well, how foo-foo-metric for you.

And another unfortunate side effect of the creative life is that you make stuff.  You don’t have to be seriously infected by bites from the cartoon bug or the art bug to be like that.  My daughter is making a suit of armor for herself from a flat sheet of aluminum that she is pounding out by hand, painting with spray paint and painter’s tape, and edging with felt.  After she’s done with it this Halloween, it will go on one of the piles of collections and models and dolls and stuffed toys and… Of course, sooner or later one of those piles is going to come to life and eat the house.  There is no place left to display stuff and store stuff and keep stuff that is far enough away from potential radioactive spider bites.  I have scars on my fingers from exactor knife accidents, oil paint, and acrylic paint and enamel permanently under my fingernails.  Shelves full of dolls rescued and restored from Goodwill toy bins, dolls collected from sale bins at Walmart, Toys-R-Us, and Kaybee, and action figures saved even from childhood in the 60’s are taking over the house and in an uproar, demanding to be played with rather than ignored.  (Didn’t know dolls can actually talk?  Haven’t you learned anything from John Lasseter?)

Anyway, it is tough to go through life being excessively creative.  I have art projects growing out of my ears.  And book publishers are calling me because my award-winning book is not generating sales in spite of two awards, 5-star reviews, and generally good quality, but the only solutions they have cost ME money I don’t have.  Oh, well, at least it isn’t boring to be me.