These are a few of the main characters of the old story which is now my newest novel.

Superchicken is Edward-Andrew Campbell.  He is basically a me-character.  His embarrassing nickname, from a Jay Ward cartoon that used to be on TV Saturday mornings, was actually my nickname in junior high and high school.  Many of the emotional changes he goes through and the embarrassments he endures to be a super hero were based on my own experiences.  But he definitely embraces the nickname as his superhero name in a way I can only wish that I did.

Brent Clarke is the outgoing athlete sort of kid who was definitely not me.  He becomes leader of the Norwall Pirates because he pitched for the softball team, and because anyone who met him naturally assumed he was the most important kid in the group.  Others look to him for leadership even when they don’t need it.  Making friends with Brent is one of the most difficult and important tasks the Superchicken must undertake.

Milt Morgan is the wizard of the group.  He is obsessed with magic and imagination. And though Brent is nominally the leader of the group, all their evil plans and hair-brained schemes come from Milt’s imagination.  The picture of Milt is drawn from me as a boy, but in reality he is the other Mike from my childhood, the one with a rather tough life and a heart of… well… maybe not gold, but at least silver.  He is also the one who insists on making Edward-Andrew part of the gang.

The Cobble Sisters, Sherry and Shelly, are a pair of identical twin girls.  They are both nudists at home on the farm place and at the nudist club in Clear Lake.  They are problematic for a shy boy just discovering girls, but Sherry definitely pursues a crush on the Superchicken and tricks him into a family camping trip at the nudist camp. 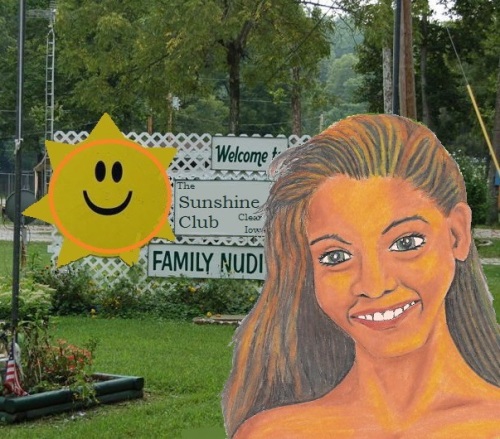 Sherry at the Sunshine Club 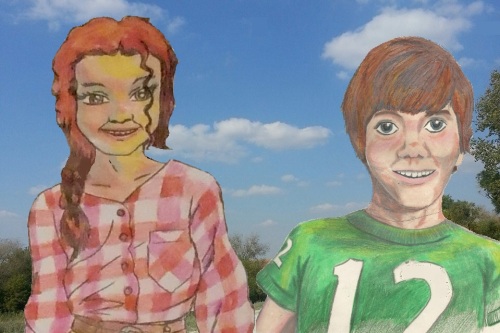 Anita Jones is the shy girl who has a crush on the Superchicken.  And he secretly has a crush on her.  But she is also the girl who becomes, completely by accident, the first girl that Edward-Andrew sees naked.  Love and hate, embarrassment and attraction, she is the one girl whose opinion seems to matter most.  I, of course, will never reveal the real life girl she is based on.  I could never live that down, even though we are both now more than sixty years old.

So those are a few of the main characters that make this novel work for me.  They are real people to me now that the novel is written, just as they were once real people when I was a boy and living the nightmare of being a mere boy in a world that needs heroes.

One response to “Characters From Superchicken”