I have been a picture-maker since childhood, drawing skeletons in the margins of my textbooks.  I used to use pencils, crayons, and colored pencils.  I don’t know why I said “used to” because I still use them… just not crayons so much any more.   In fact, I have tried, despite being a living antique my own self, to adapt to modern technology.  Computers and digital photography have made the picture-making thing easier in many ways, though my goofy old brain still has so many fossilized pathways to navigate to get anywhere new that it takes gobs of time to get it down.

Having rampant hoarding disorder and being a collecting maniac proves useful, because I have stockpiles of junk and stuff to make pictures out of.  The only thing I have to get better at is my photographic light awareness.  I have spent too much money on different light bulbs and lighting equipment.  But practice makes perfect Paffoonies. 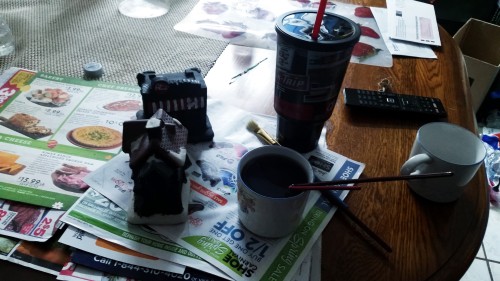 It doesn’t hurt that I constantly paint and make arty-stuff to take pictures of either.  Here is my effort to use puff paints to add snow to Toonerville structures.

And I need to work on my background awareness too.  But being at home alone while important things are going on elsewhere has given me one thing that I don’t often have.  Lots of time to work on stuff like this.  Scary how the mind of an artist often works, ain’t it?