Little Metal Men I Have Made 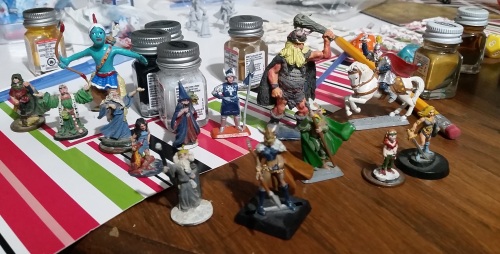 Today’s post is basically a picture post.  Every metal (or Plasticine) figure displayed in this post was painted by me with Testor’s enamel.  Most of the figures were painted back in the 1980’s.  Most of them were sculpted by Citadel Miniatures Co.  The Indian boy I repainted as a young storm giant was made of an inferior quality Plasticine that melted a bit with the paint’s more caustic ingredients.  That’s why looking at him closely makes him appear like a burn victim.

Not all of the figures are from Dungeons and Dragons games.  These are figures I used in the Traveller RPG.    I also owned the Indiana Jones role-playing game, but the figure was used as a Traveller hero.

These figures were used to play Call of Cthulu as well as Traveller.  Cerebus the Aardvark made appearances in both the Dungeons and Dragons game and Traveller, which was fairly true to the character as he appeared in Dave Sim’s underground comic.

I am proud that my arthritic hands once allowed me to paint the tiny details on these miniature sculptures.  But the red dragon I wanted to display in this post, that I have pictured before in this blog, is missing for the moment.  I spent most of the morning trying to find him.  Oh, well…  I still got to show off my mini-painting skills.