Rise of the Bargain Bin Goon 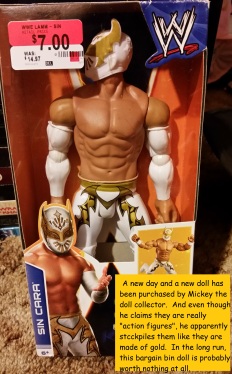 One of the biggest problems with being an action figure aficionado with raging hoarding disorder is the fact that every new dolly has it’s own personality… and sometimes its own evil agenda.  Once you own too many of these things, especially the evil ones, it is no longer possible to properly pay attention to what they are up to.

The last installment of Action Figure Comics had the hero, Captain Action (specifically Captain Carl Action) thwarting the evil Doctor Evil by taking away his evil removable brain.  (I know I use the word evil far too often in describing the evil Doctor Evil, but he is also repetitively redundant.)  I had thought this Achilles’ heel of Dr. Evil’s… er, rather, this Achilles’ brain of the evil Doctor Evil was just too convenient a solution to the problem presented by this irrepressible evil bad guy.  But as a rule I find ignorance is bliss.     I know now that I was wrong.  That was a terrible rule to follow.  As a former teacher you are supposed to know that ignorance is not bliss… it is evil.  After 31 years of fighting the War Against Ignorance in my classroom, you would think I would remember this.  I should’ve been watching Emperor Ming of Mongo more closely… or should that be closlier?  Battle scars from the War have left me unsure.

One has to recall that Evil Emperor Ming is really just another incarnation of the evil Doctor Evil under his mask… although not one with a removable brain.  Notice that his minion, the evil Doctor Mindbender is no less evil when it comes to redundant use of the word “evil”… and he even commits the further sin of repetitively saying “no-good goody-goody”.  “Ach!  Ja!  Evil use of bad grammar makes my battle scars hurt more!” cries the former teacher driven to write this hopeless drivel.

What’s this?  He means to destroy the new bargain bin wrestler doll… I mean, action figure that I just bought?  I had meant to keep that as a mint in box collector’s item until the lucha wrestling fans of Sin Cara are as old as I am now.  Then I will find one of them with hoarding disorder and sell it for possibly eight dollars.  I will have made a whole dollar by the time I’m 109! 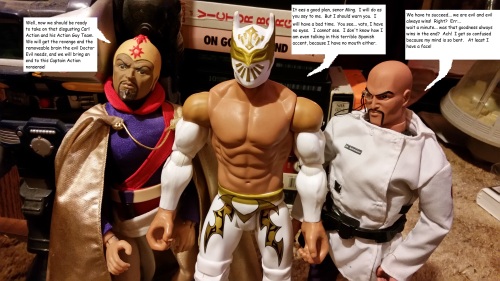 Yes, I should’ve been watching that dang evil Emperor Ming more closely!  Now he has ruined my mint-in-box action figure by taking it out of the box.  What bad thing will he do next?  Stay tuned to this goofy old blog.  You never know, I may actually continue this story if I can keep better track of what these goofy little dolls are doing.