If you’ve read very much of my goofy little blog, you’ve probably run across the fact that I am something of a conspiracy theorist and strange-twist believer… sometimes referred to as a tinfoil-hat-wearer, or that old uncle you don’t want your kids sitting next to at the Thanksgiving dinner table.  And I’ve got another one for you.  I discovered while obsessing about nostalgia and old ads in the Saturday Evening Post, that the Coca-Cola company is probably  responsible for warping my mind as a child. 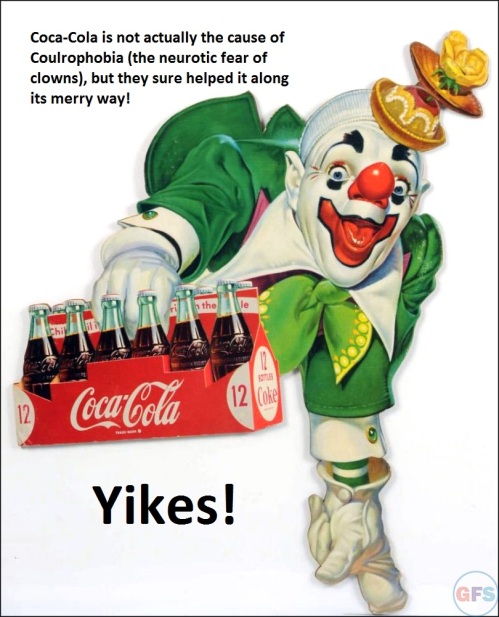 My plan in revealing this hideous conspiracy is to take a look at ads and illustrations that I saw as a kid addicted to reading Saturday Evening Post every week at Grandpa and Grandma Aldrich’s farm.  I will scour them for hidden meanings and try to reveal to you the insidious plot underlying these mind-altering illustrations.  Keep in mind that you should probably take everything I say in this article with a grain of salt.  No, really, salt can protect you from subtle mind-control messages. 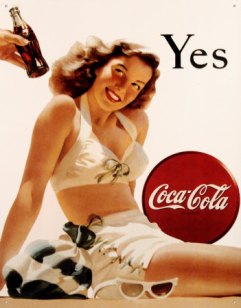 And, yes, I realize that not all the messages are that subtle.  Sometimes they shout at you, “Drink Coke and you will have more sex!”  And you have to remember we are trying to avoid that kind of mind control.  We have to fight every instance of ad companies trying to take control over us by exploiting our baser animal urges.

So, let me take a momentary interlude, a break if you will.  I have this big glass of Diet Coke I just bought at QT, and…

Well, that was good!

Coca-Cola has been at this for a while.  This ad from the  1940’s is apparently attempting to win World War II through choice of soft drinks.  Look at this feisty brew the soldier is about to quaff.  It is actually struggling in the cup to get out and go bite some German soldier’s face off.  Any American soldier who can choke this stuff down is tough enough to take on the Axis powers, Napoleon after Hitler dug him up and used Frankenstein’s scientific breakthroughs to re-animate him, and even several countries we weren’t actually at war with.  Even Rush Limbaugh and his weird lesbian-farmer-subsidies theory can’t compete with Coke on this level of propaganda wars.

I also think Coca-Cola ads may have something to do with why I became a Cardinals fan when I lived in a place full of Cubs and Twins fans.  I admit, I added the dialogue and the commentary, but I used to do the same thing in my head when I was eight and the Cardinals went to the World Series… and the Cubs could not win it all even with Ernie Banks on their team.  The Cardinals beat the Yankees in 7 games!

I blame Coca-Cola.  Especially their ad department.  Cause the generic manager is telling the generic Oubs player to “Relax… take it easy.”  But the Cardinals won because Bob Gibson had that laser-intensity stare that bored holes through Mickey Mantle’s bat!  (It is Oubs, not Cubs, by the way.  Look at the big “O” on his jersey.) 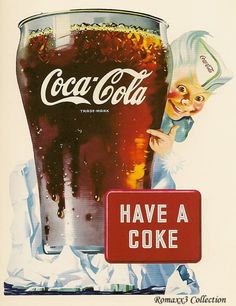 And you can’t tell me that the Coca-Cola ad seen here, the one with the white-haired goblin child casting a spell on you with his crazy eyes and pointing at your dark, delicious master isn’t seriously trying to mess with children’s minds.  There used to be a big five-foot-tall metal sign with this very picture on it in the one and only alley in Meservey, Iowa.  The one time I went to the barber there to get my hair cut I had to sit in that barber chair and stare at this evil thing staring back at me from the alley across the street.  It warped me.  For one thing, I never went back to that barber shop again… at least until I was in college and the sign was gone.

So, I seriously believe Coca-Cola was messing with my mind as a child.  They did it through subversive ad illustrations in Saturday Evening Post Magazine.  And if I’m completely crazy now, I blame them.  You don’t see that kind of thing going on today, do you?  Well, I mean, we should be very worried.  Because it probably means they have gotten better at it.