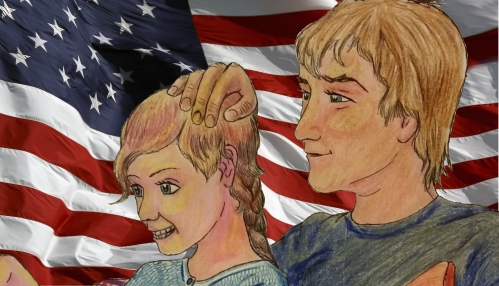 On this patriotic holiday in Texas, I am stuck at home with my daughter in the triple-digit Texas heat.  Of the four room air conditioners in the house, one is shut down as my wife is in Alaska and doesn’t need to run hers.  That saves me money, so that is a good thing.  But the large one that is supposed to cool both the kitchen and the living room which have no wall separating them keeps drawing so much power that it trips the circuit breakers and now will not run without serious cool-down time.  We are trapped in bedrooms where we can survive.

We may attempt to go to an air-conditioned movie theater later on this holiday.  But right now, we are merely surviving the heat the best we can.  And so this metaphorical situation we find ourselves in, clinging to small areas of coolness to survive a hot world, is basically how we have been forced to live since the pumpkinhead became our king and since I’ve been bankrupted by ill health, age, and a patently unfair economy.

By the way, the picture is not a drawing of me and my daughter.  I am much older, hairier, and beat-up looking than that guy.  My daughter is older than Valerie in the picture too.  These are fictional characters.  Kyle Clarke and his daughter Valerie from the novel I have not yet finished, When the Captain Came Calling.