Canto 26 – The Duke with the Curly Mustache

A quick search of three hardened underground structures that Dana Cole knew about yielded nothing but empty rooms and crying concubines from Nefaria’s harem.  It wasn’t until the densitometer in Trav’s gloved hands booped out the presence of a hidden chamber that they found something of value.

“We can cut through right here,” said Goofy pointing.

Tron used his pulse-laser as a cutting tool and made a new door in the wall.  As the slag fell inward, the adventurers found a prison room with three disheveled prisoners within.  One was a handsome, curly-haired adult with a handlebar moustache.  The other two appeared to be young boys, though one of those was a Lupin Freak and the other had pointed ears and extra-large eyes.

“Are you rebels?” asked the man with the moustache.

“Of a sort,” confessed Tron.  “We are corsair raiders, come to take the treasures of White Palm.  Who would you be?”

“You’ll not get a ransom for me, if that’s what you’re thinking.”  The man’s lantern jaw was set in a hard line.  His blue eyes flashed with resolve.

“We didn’t come here for that,” said Maggie.  “We came to get revenge on Count Nefaria, and Goofy here killed him.”

“Nefaria’s dead?” asked the man, stunned.  “I thought no one would ever catch up with that snake.”

“Please, kind sirs… madam, are any of you a medic?” asked the Lupin boy.

“I can put my hands on Doctor Courtney Blake,” said Tron.  “Why?”

“Hassan here is wounded, and his leg is infected.”

Maggie the Knife kneeled beside the wounded boy.  She gently peeled away the torn and bloody pants caked to the wound.  “Oh, gawd!” was all she could say.

“Get Courtney Blake,” Tron commanded of Sheherazade.  The dark-skinned beauty moved swiftly back up the tunnel.

“What is your name, son?” Maggie asked, looking at the white-furred dog-boy.

“I am called Sahleck Kim.  The Peri here is called Hassan the Elf.  Our friend and master is called Duke Han Ferrari.”

“Duke Ferrari?  The Duke of the planet Coventry?” asked Tron.  “I thought you said you weren’t worth any ransom.  Coventry is one of the most densely populated worlds in the Galtorr Imperium.”

“Yeah, well,” said the Duke, “they don’t want me back.  The Imperium paid Count Nefaria a hefty fee to dispose of me permanently.”

“Why would they do that?” asked Maggie.

“I’m the leader of the Revolutionary Star-World Brigade.  We have been working towards a reversal of the last Unification War, trying to split our planets away from the Galtorr Imperium.”

Tron laughed.  “Now there’s an idea whose time has come.  You have any forces on your side?”

“We have troops aplenty, but no space fleet.  The Imperium holds a lock on that.  Independent space fleets have all been decimated or incorporated into the Imperial Space Navy.”

“They haven’t decimated my fleet yet, though they’ve tried real hard,” boasted Tron.

“How many ships are in your fleet?” asked the Duke, a new fire of revolution beginning to spark up in his blue eyes.

“Tron!  The boy is going into a coma!” cried Maggie.  “Without immediate attention, he’ll die.”

The boy, a Peri Freak created by Faulkner Genetics to be a living, creative computer, was trembling and sweating as he appeared to be asleep.  Any thought of other things left both Tron and Duke Han Ferrari.

“Dr. Blake!” shouted Tron into his commo dot, “Get here now, or face my wrath!”

As if by magic, the pirate doctor appeared wielding mini-computers and med-robots.  In no time the leg was amputated and the Peri saved. 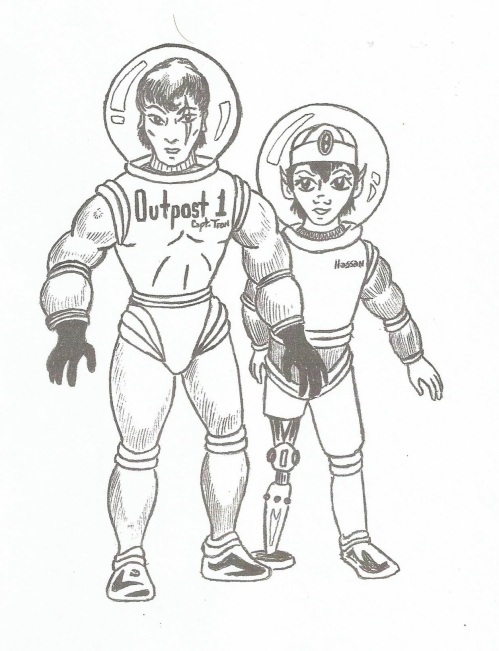