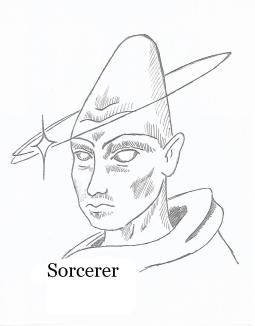 Tron Blastarr was a masterful combat pilot.  The wraith corsairs were too much for several of his less talented pilots, but Tron himself began chewing them up.  He found their weakness.  They merely had to be pounded twice on the same part of the hull to open a major hole in the surface of their state-of-the-art ablative armor.  He had taken out six of them before one could even circle behind him.  That lucky one that sneaked behind was taken out in the next instant by Elvis the Cruel, himself the owner of four victories over wraith corsairs.  The Infamous King of Killing was next with three kills to his record.

“We have to get aboard the space station and get the Crown!” hissed Sorcerer 3 grimly.

Dana Cole took the pilot seat from him on their black clipper and showed her own considerable skill as she spiraled into the nearest space port docking bay.  The landing and attachment was silky in its perfect execution.

“Let’s get the Crown before your pirate friend atomizes us!” growled Cole.

The three treasure hunters ran into the space station as if it were on fire.  Their footfalls clanked down the tube-arm to the central control station.  There, just where Trav had left it, was the blue box, the Crown of All Stars sitting on top of it.  The three crystals were all lit up, though the central stone was a sickly green color, much paler than the two bright stones on either side.

“Ah!” said Sorcerer, snatching it up, “very good, Trav.  Now I no longer need you two.”

“My dear, did you really think Count Nefaria needed either one of you?”  Sorcerer 3 pulled out the Skortch ray and pointed it at Dana.  “If you thought you were an indispensable agent, you are as much a fool as Goofy here!”

“Tell Count Nefaria that Goofy is mine to kill,” said Tron from the tube-arm behind Sorcerer 3.  Tron’s Advanced Combat Rifle spat a five-slug burst into the Synthezoid’s back.  Sorcerer’s evil smile turned to a scowl as he slumped to the metal floor.

“Tron, you are a dead man!” threatened Sorcerer.

“Can’t be as dead as you are,” said Maggie from behind Tron.  “We’ve killed you twice!”

“Have you down-loaded yet?” asked Tron.

Tron ripped a fully automatic blast through the back of the Synthezoid’s head.  Computer chips, wire, and exotic fluids sprayed everywhere.  The spark orbiting Sorcerer’s head winked out.

“You killed him!” marveled Trav.

“Maybe not,” said Tron.  “He apparently can download his mind to new body somewhere else in space.  I don’t think we have seen the last of old Pasty Face.”

“Are you gonna kill Trav Dalgoda this time?” asked the beautiful red-headed Maggie the Knife.  “You have him right where you want him again!”

Tron smiled.  “As irritating as this clown is, he’s done me a favor.”

“You helped me find out who’s collecting Ancient artifacts.  I didn’t know it was Count Vladimir Nefaria until Sorcerer 3 let it slip to you.  I finally know where to go to intercept the packages that rat-man has stolen from me.”

“Maybe you had better not,” suggested Dana Cole as she picked up the Crown of Stars.  “I happen to be a former agent of Count Nefaria.  I can open doors for you on the planet, White Palm.  But I won’t if you kill Trav Dalgoda.  I have fallen in love with this goofy man.”

“Well,” said Tron, “I pity you, woman, but I will take you both along as we assault White Palm.  This little venture is not over yet.”

“Tron, old Jester?” began Goofy, “you wouldn’t really hurt an old, dear friend like me, would you?”

“I’ll be the death of you yet, Goofy.  I need you a little longer, though.  Get your gear together.  My boy, Artran, missed you while you were gone.”

“Ooh!  I give up!” moaned Maggie, glaring at Goofy.  “Give me that!”  She viciously tore the Crown of Stars out of Dana Cole’s hands and put it back in the blue box.  She took the box with her as she stormed out of the station.

Trav smiled.  He picked up Sorcerer’s Skortch ray. “She likes me too, underneath,” he said.

“Sure she does,” said Tron sarcastically.

“She better not,” said Dana, narrowing her eyes.