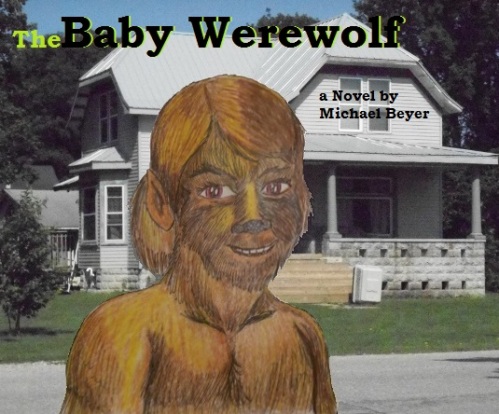 I am now in that period of deflation after having finished a draft of a novel.  My brain is drained and mostly empty.  I am left with leftover piles of stupid words and guileless thoughts that I didn’t use in the book and none of that is good fuel for thinking.

But I can tell you a few things about my novel.

First of all, the werewolf of the title is not really a werewolf.  He is instead a boy afflicted with a genetic hair-growth disorder called hypertrichosis.  It is genetic in nature and runs in families.  It may skip generations.  But it is a hard thing to deal with in terms of self image for the sufferer.  Once the wearers of werewolf hair were treated as circus freaks, to be marveled at, pitied, and sometimes reviled.

But this is a horror novel of sorts, not really about the hypertrichosis sufferer, but more about another member of the family who has become abusive in increasingly horrible ways.  And the murders in the book are committed using canines as weapons.

The wolfishness is not located in the animals, but in the heart of a man.

There is a lot of Saturday night black and white horror movie watching in the 70’s that went into this book.  It also comes to fruition by way of my own experience being sexually assaulted at the age of ten.  The fear and self-loathing that this story has to tell about are metaphorically very real things.  I was not myself a monsterous-looking creature in my youth, but I felt the same feelings of isolation and rejection that one of the main characters, the boy with werewolf hair feels in this book.  Part of why it took me twenty years to write this tale is my own personal struggle to overcome my own fear and self-loathing.

But even though this book comes to its conclusion with silver bullets and death by wolf fang, it is basically a comedy.  Comedy, in the Shakespearean sense, always ends with the hero getting the girl and the monsters defeated.  And it has a few laughs that not even the death-by-teeth parts can overturn.

So, I am glad I am finally finished with this book.  Not edited and published, but finished as an exercise in wringing things out of the terrible nightmares and monstrous memories buried in my cluttered old brain.