When Ged and Trav reached the bridge of the Leaping Shadowcat, Tron’s angry face already filled the view screen.  Next to him stood the flame-haired beauty known as Maggie the Knife with one hand protectively shielding their small son, Artran.

“So!  Ged and Ham both?  How could you both be so stupid as to take up with that worthless clown?” growled Tron in a gravelly voice.  His somewhat handsome face was marred not only by anger, but by a hideous laser scar that ran from the top of the left side of his forehead, through the eye socket of his artificial left eye, down to the left side of his lantern jaw.

“Tron,” said Ged as diplomatically as he could manage, “You know me.  You know I would never take up with a swindler and a pirate like Trav willingly.  You must also know that I have troubles of my own about now.  If you leave us in peace, I can promise Trav’s presence aboard this ship will result in banishment for him.  You will never see his face in Imperial Space again.”

“Ged, I respect you more than any other space man I know.  Your word is good, and you never lie.  I wish your worthless brother and I both had your integrity.  We’d be kings among men.  But Goofy stole a priceless treasure from us and both Slimeball Harris and Blue Death Jones just died trying to get it back.  Both of their corsairs were destroyed by that rotten space barge Goofy was flying.” 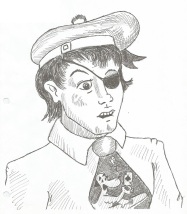 “You’re moaning about Slimeball and Old Blue?” asked Trav in an incredulous voice.

“What if we give you the treasure, Tron?” asked Ham.

“No!” cried Trav.  “You have to let me explain that to you in private, first!”

“Yes,” growled Tron.  “Give me the blue metal box and the Nebulon slave girl. You can keep the rest. And you can keep Goofy forever, for all I care.”

“Yes,” said Tron, “but this one is a princess among the Space Smurfs.  She is the first daughter to the Sinjarac Warlord, whatever that means.  We’re not just talking slave here, but a potentially valuable hostage for the Imperial Space Navy.  They would pay well to get their hands on her.”

“Why a hostage?” asked Ham.

“You didn’t see the Imperial Scout Data we intercepted,” said Maggie softly in a musical voice.  “A coreward border war has erupted between a huge convoy of Nebulons in their Space-Whale Cruisers and the Galtorr Imperium.  Nobody in the Imperium seems to know why, but there is a massive migration of Space Smurfs going on just beyond the Imperial Border.”

“What is in it?” Ged asked Trav.  His eyes narrowed.

“You have to give us what we want.”  Tron seemed too confident.  “We have corsairs blocking every jump route back into known space.  Soon we’ll have a hundred of them here ready to board your crappy little safari ship.”

“Yes,” said Maggie prettily.  “We will take the treasure anyway and you’ll all be skinned alive with a dull knife.”

“Are you ready with our little surprise?” Trav asked Ham.

Ham leaped into the pilot’s seat and slammed down on the jump button.  The jump into lightspeed-plus was jarring.  Space began to fold around the ship.  The surprised faces of Tron and Maggie the Knife faded away into white static, soon replaced by a red-and-blue-shifting starfield in jump space.

“What have you done?” Ged asked Ham with shock on his face.

“You didn’t think I would start this leap of faith without at least one jump already planned and programmed?”

“Oh, yes.  I plotted a course to a planet almost nobody has ever heard of.  It’s a place with the silly name of Don’t Go Here.”