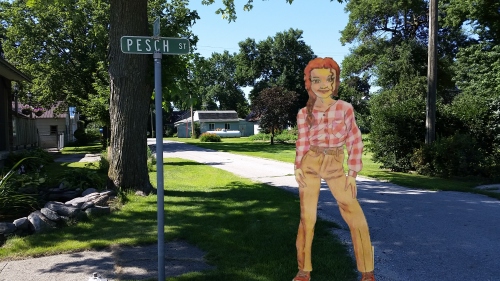 I grew up in a small rural town in North Central Iowa.  It was a place that was, according to census, home to 275 people.  That apparently counted the squirrels.  (And I should say, the squirrels were definitely squirrelly.  They not only ate nuts, they became a nut.)  It was a good place to grow up in the 60’s and 70’s.  But in many ways, it was a boring place.

Yes, there were beautiful farmer’s daughters to lust after and pine for and be humiliated by.  There was a gentle, supportive country culture where Roy Rogers was a hero and some of the best music came on Saturdays on Hee Haw where there was a lot of pickin’ and grinnin’ going on.  There were high school football games on Friday nights, good movies at the movie theaters in Belmond and Clarion, and occasional hay rides for the 4-H Club and various school-related events like Homecoming.

I lived in a world where I was related to half the people in the county, and I knew at least half of the other half.  People told stories about other people, some of them incredibly mean-spirited, some of them mildly mean, and some of them, though not many, that were actually good and actually true.  I learned about telling good stories from my Grandpa Aldrich who could tell a fascinating tale of Dolly who owned the part of town called locally “Dollyville” and included the run-down vacant structure the kids all called the Ghost House.   He also told about Dolly’s husband, Shorty the dwarf, who was such a mean drunk and went on epic temper tirades that often ended only when Dolly hospitalized him with a box on the ear.  (Rumor had it that there were bricks in the box.)

And I realized that through story-telling, the world became whatever you said that it was.   I could change the parts of life I didn’t love so much by lying… er, rather, by telling a good story about them.  And if people heard and liked the stories enough, they began to believe and see life more the way I saw it myself.  A good story could alter reality and make life better.  I used this power constantly as a child.

There were invisible aliens invading Iowa constantly when I was a boy.  Dragons lived in the woods at Bingham Park, and there were tiny little fairy people everywhere, in the back yard under the bushes, in the attic of the house, and building cities in the branches of neglected willow trees.

I reached out to the world around me as an artist, a cartoonist, and a story-teller and plucked details and colors and wild imaginings like apples to bake the apple pie that would much later in my life feed the novels and colored-pencil pictures that would make up my inner life.  The novels I have written and the drawings I have made have all come from being a small town boy who dreamed big and lived more in stories than in the humdrum everyday world.

One response to “Small Town Inspirations”