You know that old doll house that my wife rescued for me?  You don’t?  Well, about six or seven years ago she spotted it on the sidewalk with a pile of other trash waiting for the city garbage collectors.  She asked the homeowner about it.  It was a kit they had bought at Michael’s but never finished, so my wife immediately thought, “My goofy old husband collects dolls all the time, so he will love this.”

“Take it,” said the homeowner, “It’s a shame to have to throw it out.”

So she brought it home and gave it to me.  I of course, collect twelve inch dolls and action figures, none of which fit in a doll house of this particular scale.  So it had to sit practically empty for a space of about four years.  Then my daughter got tired of some of the small Happy Meal dolls that she had gotten from McDonald’s when she was a wee gamin.  (Yes, that’s a real thing… you can look it up.)  I acquired two mostly naked Mini-Barbies, and four other doll-house size dolls, two baseball players and a Lullaby League Girl from Oz, along with a small Winkie Soldier.  Then Dreamworks did the Trolls movie. 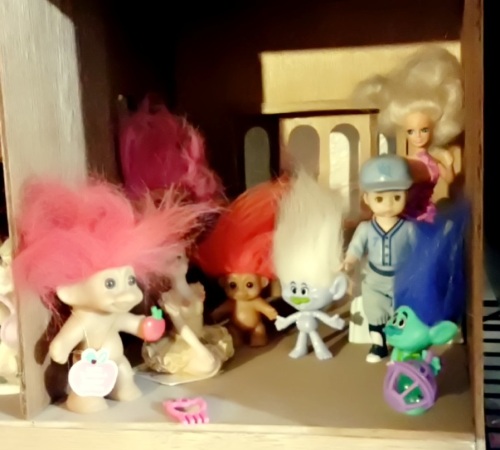 They began moving in by two different routes, these trolls.  Teacher Troll and Baby Troll and Big Troll, whose hair in the back is the only visible part of him… or possibly her, moved in from where I found them in kids’ bedrooms and the garage while cleaning.  I used to keep a stash of them to give out as classroom prizes back in the 90’s.  I bought the movie Trolls from Walmart at $5 a shot over a bunch of weeks between Thanksgiving and last weekend.  The empty spaces where I didn’t even have appropriate doll furniture were now being filled by Trolls.

In the downstairs bedroom you can see the little yellow Troll has joined Naked Mini-Barbie, the Lullaby-Leaguer, Ceramic Book-Lovin’ Bear and the Angel who used to hold my wedding ring.  (I could never wear it due to arthritis, and it eventually got lost in the move from South Texas to Dallas.)  (Yes, I know it is not a good thing to lose your wedding ring, but it is possible my wife sold it so she could shop for a better husband.  At least, that’s what she told me while she was really angry.)  (And yes, I know I’m supposed to be talking about Trolls taking over my doll house, but I actually like bird-walking while telling such stories.  It lends such every-day Mickey-ness to the story.)

The baseball player in the upstairs sitting room where nobody sits, once spent an entire winter at the bottom of the swimming pool.  That’s why his blue uniform turned a bit putrid green.  He stays in this room with my Wish-nik Troll from 1967 and the Winkie Soldier from Oz, who is naturally green in the face and never took a swim.

Also upstairs are my Troll-topped Pez dispensers, two more movie Trolls, and the former Teacher Troll who lost her apple and my daughter gave a modelling clay diaper to for modesty’s sake which has long since melted a bit (the diaper, not the modesty).

And at the top of it all, in the attic, are the two movie Trolls that I bought first and started this whole Troll-collection nonsense.  So now the doll house is no longer empty.  But the Trolls are beginning to complain that there is no paint on the walls, and I really ought to do something about that before they take matters into their own hands.  You never know what they might do in the middle of the night when nobody is looking.

One response to “Troll Time at the Local Doll House”