I have been taking note of the Republican approach to science as displayed repeatedly in Congress.  I decided that this is the kind of science that can best explain the dog-poop phenomena, since it is, ultimately, about how the data feels more than measuring and quantifying and dealing with, you know, those fact thingies.

You see, the problem comes in with the fact that my dog, Jade, is producing dog poop at record levels, and it is all becoming rather a burden.   Now the dog-poop literature, (yes it does exist, since dog lovers write about anything and everything to do with dogs), says that it is not uncommon for a healthy young dog to poop as much as 5 times a day.  But my dog seems to poop exactly one time more per day than the number of times you take her for a walk.  If we go out five times, she poops six.  If I take her out in the middle of the night for a sixth time, she poops seven.  What the heck?

My wife really hates the dog because she poops on the carpet so much.  (The dog, not my wife.  My wife is satisfactorily house-broken.)  There are places on the living room carpet she marked as a puppy five years ago where she insists on re-pooping practically every night.  No matter how often we scrub the carpet and box her ears, still, brown spots and poop lumps to greet us almost every morning.  Maybe she does it because my wife tells her how much she hates her and the dog wants to get even.  But that is the opposite of what the dog says.  She loves Mommy because Mommy gives the dog soup bones.  Somehow, it seems the dog believes she is giving us all a gift by pooping on the carpet and filling the house with her personal scent.  She poops for us because she loves us. 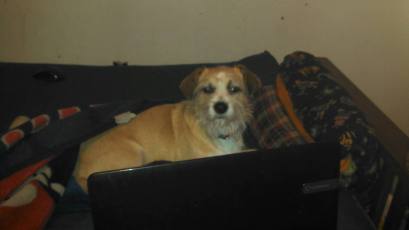 Here Jade Beyer is busy using Henry’s computer. She has her own Facebook page and everything.

I drew the diagram at the start of this article to better explain my Republicanized theories of dog poop and dog love.  You will notice that, based on observations of total output, I have theorized that dogs must be almost completely hollow.  They don’t apparently store poop in their legs, but the rest of their dog bodies appear to be hollow poop-tubes that store nearly infinite amounts of poo.  Dogs also apparently have some kind of instant-poop-maker at the base of the throat so that anything they eat, dog food, my missing left socks, my son’s retainer, dead rats, whatever was growing behind the rice bag in the pantry, and whatever people food they can steal, is instantly transformed into poop.  Need to poop on the floor because dad didn’t give you any of the bacon at breakfast?  Eat a sock.  Fill up with instant poop ammo.  The poop on the floor will prove how much you love dad and why he should give you bacon more.

So, now that I have studied the poop problem, what solutions could there be?

Well, I have threatened the dog to use corks and other sorts of plugs, but that wouldn’t solve the problem so much as merely delay it.  And I dread the impending explosion in the living room that such a plan suggests to a vivid imagination like mine.  I have thought about feeding her less, but it seems she can still use the puppy beg-eye to such good effect that she could subsist entirely on people food conned out of my son and daughter.  So, I will use a Republican congressional solution.  Since their response to poverty is to give more money to rich people, and the solution to climate change is to cut pollution restrictions, then obviously I need to feed my dog MORE!  I need to cram it down her greedy little throat if necessary.  That will fix it.  Or bring about fat, exploding dogs all the sooner.